Below 2C
Home Climate Climate Change Is it Time to Switch to Kangaroo Meat? 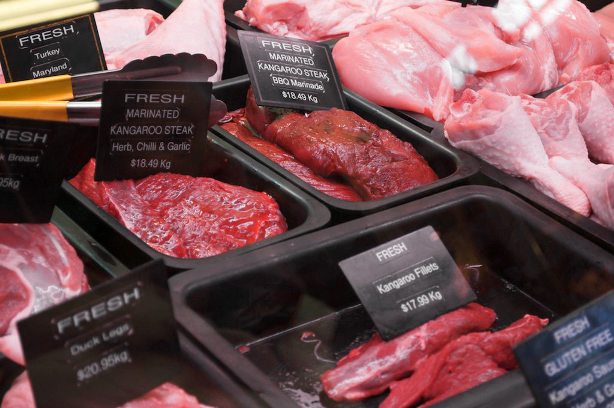 Recent food consumption wisdom would suggest that Locavore Eating – eating local foods – is the way of the future. It seems perfectly logical that eating local food will reduce our emissions footprint. With a world population now over 7 billion, the question of how we’re going to feed everyone without damaging the environment is paramount. Not to mention the other 2.5 billion that will be added between now and 2050.

Makes perfect sense, right? Not So!

So, although it seems counter-intuitive, eating local may not the best idea after all. This is confirmed in a study by two researchers from Carnegie Melon  (Chris Weber & Scott Mathews) who:

“suggest that a dietary shift can be a more effective means of lowering an average household’s food-related climate footprint than “buying local.” Shifting less than one day per week’s worth of calories from red meat and dairy products to chicken, fish, eggs, or a vegetable-based diet achieves more GHG reduction than buying all locally sourced food………the GHG emissions associated with food are dominated by the production phase, contributing 83% of the average U.S. household’s……….footprint for food consumption…..transportation as a whole represents only 11% of life-cycle GHG emissions, and final delivery from producer to retail contributes only 4%” claim Mathews and Weber.

What you might want to consider instead is eating less meat, particularly beef and dairy products. Cows are wickedly polluting organisms – producing methane, which is 25 times more potent than CO2 as a greenhouse gas. 30 percent of the world’s ice-free land is devoted to live-stock production, according to The New York Times.

A much better solution would be to switch to kangaroo meat since it does not produce as much deadly methane as cows do.

Americans and Canadians consume 36 and 30 kgs of meat per capita respectively, whereas China and India have a per capita consumption of only 4 and 2 kgs.