For some, ‘warrior’ conjures up images of aggression, violence and brutality. A female friend of mine (Carole, also a Baby Boomer) dislikes the term ‘warrior’. “It’s too much a male artifact” she claims. My wife, on the other hand, likes the sound of BoomerWarrior. She is always so supportive. She  says  that it speaks about me as a person, a parent and a grandparent.

Younger women  (daughter Tricia and daughter-in-law, Shannon) are more comfortable with ‘BoomerWarrior’. A friend (Jessica) sees it this way in a recent email:

I personally love the title Boomer Warrior. I do not think it is in any way juvenile; quite the opposite. Is it too male-focused……even though I have a strong feminist critique of war-culture, I can’t help but feel that we are in the middle of a war, and find the language of ‘warrior’ to fit that…..plus, ‘warrior’ has a deeper dimension to it. It says something about the self – who the person is at the core…..there are lots of female warriors out there, past and present.

The other thing about ‘BoomerWarrior’ is that it is poetic, powerful, evocative language. You are being ‘in-your-face’ about what is needed in our time, from Boomers and everyone else. That may scare some people, but in my opinion, so be it. We should be scared. Oh, and another thing about the evocative nature of the language. People need that. We are creatures of symbol and ‘warrior’ is a powerful symbol.

The Path of the Warrior

Women Warriors come from all walks of life both young and older. Some hold powerful positions and exercise influence over millions of people. Think Hillary Clinton, Secretary of State of America, one of the world’s most influential Baby Boomers. She was born in 1947. Then there are lessor knowns such as Margaret Trudeau, (former wife of Canadian Prime Minister Pierre Elliott Trudeau) who fought mental illness her entire life and endured the pain and sorrow of loss more often than anyone should. See Changing My Mind , a recent biography. She is also a Baby Boomer, born in 1948.

She continues to be a true warrior by talking about mental illness, as a way to increase awareness of this disease which afflicts so many.What about single mothers who struggle to support their families often feeling isolated and alone? And the millions of women volunteers in hospitals, shelters, food banks, neighbourhood schools.Our society is replete with examples of extraordinary women warriors who deserve to be recognized and celebrated. But that will be for another day, another post.

There are hundreds of thousands of women warriors involved in worthy causes, indeed wars. We have a war for almost everything – poverty, drugs, crime, cancer, child pornography, terrorism, child abuse, violence against women, obesity, alcoholism, mental health, the proliferation of nuclear weapons, pollution, global warming. Future wars will be about depleting resources and water. The Path of the Warrior is demanding. It requires sacrifice, tenacity and an unrelenting commitment and responsibility to future generations.

For the most part, the world has been ruled by men during the past few centuries. The current state of world economics, the global environment, constant wars, terrorism and world politics collectively are a strong indictment of the ultimate failures in governance and decision-making in a world dominated by men in power.

Reporting for IHT Global Opinion, Dayo Olopade (The Fairer Leaders) points to Africa as an area where there is a more promising future for women leaders:

The Nobel laureate Ellen Johnson Sirleaf is in her second term as Liberia’s president. Malawi’s newest chief executive is Joyce Banda, a vice president who peacefully transitioned to power following the death of the longtime ruler Bingu wa Mutharika. And last week, Senegal held the first round of parliamentary elections in which half of all candidates must be women.

Women bring a more balanced perspective and diversified policy agenda with greater focus on equity, social justice and collaboration rather than confrontation. It is quite obvious that the traditional male-dominated patriarchal power structure is deeply entrenched and will be difficult to change. Aloysia Inyumba, Rwanda’s former minister for gender recently said “There’s a general understanding and appreciation that if things are going to be better in Africa, women are going to have a key role.”

In Mexico’s recent elections, women secured a third of the Mexican parliament as reported in the International Press News by Anayeli Garcia Martinez:

This means that when the new legislative period is inaugurated on September 1, the lower chamber will have a total of 186 female representatives, or 37.2 percent of the house.

Thankfully, our world is changing and for the better. There are now thousands of women worldwide in positions of leadership – heads of state, corporate CEOs, health care providers, educators, scientists, astronauts, bankers, entrepreneurs, philanthropists.

Canada and US – Dismal Ranking

However, there is much room for improvement in North America. The Center for American Women in Politics reports that:

In a world classification of women by The Inter-Parliamentary Union, Canada has 24.7% female representation in its parliament ranked 42nd tied with Australia. The United States which regards itself as the ‘powerhouse of democracy, just behind the Greeks it would seem,  is ranked a pathetic 79th of 189 countries. Countries like Cuba, Burundi, Afghanistan, Serbia are classified well ahead of the US on the equality scale for women representation in government.

Rwanda is ranked first with 56.3% of its parliament comprised of women representatives. Sweden it the top Western country ranked 4th at 44.7%.

We have a long way to go in North America. 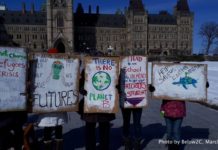 Can Students Save Humanity When We Adults Could Not

Top Five Posts of 2016 on BoomerWarrior