Peter is a retired family MD who also spent many years working in environmental health development policy. You can also find Peter Carter on Uprage (Blog) and OnlyZeroCarbon  (website).

This article features a rare (but getting uncomfortably close to reality) report by Rex Weyler (writer, journalist, ecologist, historian and one of founders of Greenpeace) on 50 years of hoping for sustainability, in which he suggests it’s high time we move beyond hope. I begin the article by recognizing the ‘forget hope’ pioneer Derek Jensen, who alerted me to the insidious deadly danger of ‘hope’ in his Orion 2006 article, Beyond Hope.  Read Jensen to exorcise your hope demon.

Is Hope a Virtue?

Jensen says we are hooked on Hope like an addict. Hope feels good – the world is fine really, and of course so are we. With a fix of hope, we can be happy and don’t need to worry about the world that seems so bad.

Yes I know Hope is a great virtue in the New Testament. So, is facing environmental Armageddon armed with hope the way of the Lord? Sorry, we can’t hide behind Christian hope. It was a very different kind of hope compared to our hopeful avoidance of discomfort, fear and action.

The New Testament kind of hope, I am told, is what led the early Christians to give up everything and put their lives on the line to make the reign of righteousness a reality. Hope was a revolutionary ‘change the corrupt world’ kind of thing by giving Life everything.

Contrary to being a virtue, Derek Jensen says that:

Jensen calls on us to give up on hope because it is a contagion of paralysis for the many growing dangers we face, making the odds for our survival very much worse.

Hope allows us to carry on what we have been doing already for at least 25 years – defer the dangers of planetary catastrophe to someone else sometime in the future. When we say things look grim but we must be hopefully positive, who are we talking to? Who are we fooling? The hidden message to our kids and grandchildren is that we are not going to do anything right now, but we hope that they can.

My wife agreed with Derek Jensen immediately – Hope is not an action verb.

We have all been infected by the creeping emotional epidemic of environmental hope. Rex quotes George Monbiot who lamented in The Guardian, that “the promise to save the world keeps us dangling, not mobilising… Hope is the rope on which we hang.”

Below are short excerpts I (Peter Carter) have edited, out of respect for the author, to remove all vestiges of hope. The excerpts are taken from Zietgist Shift (Weyler’s Blogpost of August 7.12)

Did Earth rumble after the Rio+20 climate conference? Or was that the roar of a billion citizens letting go the expectation that polite dialogue and political process would restore Earth’s ecological balance?

Fifty years ago, in 1961, Rachel Carson published Silent Spring, launching a new public discourse about ecology that reached an early zenith in 1972 at the first U.N. ecology conference in Stockholm. Today, we have armies of environment groups, swarms of ecology PhD graduates, environment ministers, conferences, science summits, green products, green travel, banners and blockades. But we are less sustainable than we were in 1961.

After 50 years of environmental efforts, the most troubling trends – earth’s temperature, species diversity, soil health, toxic dumps, shrinking forest, expanding deserts – appear worse. The testimony of our collective failure blows around us like a chilling polar wind. It is too late to save the 25,000 species that blinked from existence, or the 300,000 people who perished from climate change impact, last year, and will again this year. We have not yet turned the empires of humanity back toward the paradise from which they were born. Why?

After Rio, a collective “gulp” rose among ecological scientists, journalists, bloggers, and commentators. Maybe we can’t stop global heating or bee colony collapse. Maybe the systems feedbacks are more complex than our engineering can fathom.

The new mood arises from many events — BP, Fukushima, Occupy, Arab Spring, Rio+20, and so forth. But Rio signaled a tipping point for believers in the political process. U.K.’s Deputy Prime Minister Nick Clegg pronounced the agreements “insipid.” Former Irish president and UN High Commissioner for Human Rights, Mary Robinson, called the results “a failure of leadership.” Ecology groups walked out. Indigenous leaders held their own meetings and called the official Rio “green economy” plan “a new wave of colonialism.”

Writer/farmer Sharon Astyk wrote in Scienceblog, “Most of these events are about feeling good, about pretending… [The] fundamental policy changes that would be necessary… aren’t even on the table…”

University of Texas journalism professor Robert Jensen went even farther in Counterpunch: “to be a hope-peddler today is… laziness… We have to believe in something beyond hope.”

After Rio, ecology writer Chris Hedges wrote “Time to get crazy” warning that “Civilizations in the final stages of decay are dominated by elites out of touch with reality… [The] failure to impose limits cannibalizes natural resources and human communities… it all will come down like a house of cards.”

Gulp! Fifty years of “environmentalism” and we are less sustainable. So what do we do now?

Accepting bad news honestly appears part of the new mood. In the U.S., Justin Ritche and Seth Moser-Katz post the Extraenvironmentalists podcast, which they call “Doom without the Gloom,” the tough love news with a sense of irony. “Is sustainability a farce,” they ask, “when associated with a way of life that is out of touch with reality?

Twenty-four-year-old singer Cold Speck from Etobicoke, Canada writes “doom soul” music, realism with rhythm. “We fall from a dying tree,” she sings in Winter Solstice.  The youth feel it instinctively. Witness 11-year old Ta’kaiya Blaney warn “if we do nothing, it will all be gone,” from “Shallow Waters” a song she wrote and sang in the indigenous camp at Rio.

This year, Nature published “Approaching a state shift in Earth’s biosphere” by 22 international scientists led by bio-paleoecologist Anthony Barnosky from the University of California. The team warned that human activity is likely forcing a planetary-scale transition, far beyond simple global heating, “with the potential to transform Earth rapidly and irreversibly into a state unknown in human experience.” Averting a planetary ecological crisis, they warn, now requires unprecedented human effort. “In a nutshell,” said Canadian co-author, biologist Arne Mooers, “humans have not done anything really important to stave off the worst. My colleagues… are terrified.”

Whatever the environment community does at the next “summit,” it might as well be new and creative. Joining the charade won’t likely help. Perhaps it is time for a boycott or a counter-summit in a separate location, guided by indigenous leaders.

In Fifty years of ‘environmentalism’ Rex Weyler observes  “we’re less sustainable” and asks “so what do we do now?”

So what do we do now? Let’s get real even if it is too late. The human sane response to the climate emergency is terror, not hope. Abandon hope and instead, fear for our children and for ourselves.

Only a hopeful fool could think climate change can still be mitigated and catastrophe prevented. We are twenty years too late. We are now our future. All that hoping has caught up with us.

To Hell with Hope! 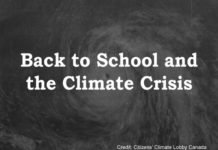 Adults Need To Do Their Homework On The Climate