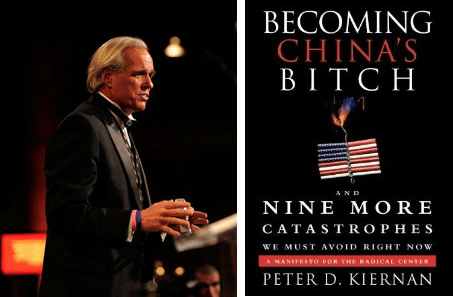 Becoming China’s Bitch is the title of a recent book by author Peter D. Kiernan (former Wall Street executive). The book identifies the entrenched co-dependency with China as one of 10 catastrophes the US must avoid in order to thrive in the 21st century. The title of the book is meant to be provocative & controversial. It most certainly is. It’s a grabber.

Other catastrophes to be avoided by the United States include the aging of America – the demographic problems caused by the Baby Boomer Generation – the political deadlocks, the degeneration of the education system, the emergence of the surveillance state, health care costs.

One of the more immediate problems, according to Kierman, is the rather tepid response to  dependency on China. Kerman points out that the US has lost its ability to govern. He calls it “a crisis in governance……polarization and the inability to unite against problems”. The US is frozen in time and in bad need of a national defibrillator he mentioned during an interview shown on the Daily Ticker with Aaron Task.

The useless and endless time spent on the discussion of non-issues such as contraception, immigration & abortion  during the current presidential election campaign is a waste of energy – an energy which could be better spent on true challenges. As Kernan says, “we can influence the course of history or we can let events wash over us”.

In spite of the tough talk about China by US leaders, there does not seem to be any strategic thinking or long term mindset on how to deal with China – “not a good enough eye on China” says Kiernan. The American attitude is too casual and indifferent.  The Chinese are capitalizing on this weakness in America’s foreign and domestic policies toward China.

America is so focused on itself – its giant effort to fight terrorism, its obsession with internal security, defense spending, policing the world – that it does not focus on what China is becoming.

Glenn Greewald writes about The American Character in Salon and features Fareed Zakaria speaking about the war on terror “we don’t look like people who have won a war. We look like scared, fearful, losers.”

The fact is, North Americans are addicted to consumerism and love cheap goods. This supports  the Chinese export machinery.  Kiernan highlights the following factual information in Becoming China’s Bitch:

China’s influence in international affairs is becoming a threat to American supremacy. The emerging psychology over China has led to an unhealthy paranoia and paralysis. There is the very real fear that China will surpass the US as the world’s dominant economic power and that the US will be dependent on China because it holds the purse strings. “Having our largest trading partner as our largest lender is a threat to national security”, says Kiernan.

The reality is that China intends to become a world military power – now spending over $90 b per year on defence. The Chinese wish to challenge the Americans on the high seas by expanding their naval capabilities. Ironically,  US dollars are financing the Chinese military build-up.

The International Institute for Strategic Studies ( a British think tank) in a 2011 report, estimates that if current trends  continue,  it will take 15-20 years for China to achieve military parity with the U.S.

China is now fiercely competing for oil resources on a global scale. Over 50% of oil imports come from the Middle East – increasing economic and diplomatic influence and presence in the Arab World.

There are other areas where the Chinese are challenging for world dominance. China has identified renewable energy technology as a primary focus for its future economy. Also, R & D is now a top priority, growing faster than in any other G8 country – to over $70 billion per year. China provides 97% of the world’s supply of rare metals (formerly dominated by US), is achieving dominance in the production of batteries in the race to replace oil-based technology and produces 80% of the world`s vitamin C and 33% of the world`s vitamin A.

China`s global impact  is a result of a planned economy with clear expansionist goals and strategies. It has an unrelenting drive to win.

Americans are starting to miss the old post-war order of winning, growing, running and owning the world. The 21st century will not be America’s century. “America is a superpower but not ‘the’ Superpower” says Kiernan.

Becoming China’s Bitch is not unique to the US. China is also gaining a strong hold in Canada. For example, Chinese investment in the Oil Sands is growing at a torrid pace. Spending by Chinese state-owned enterprises in the Oil Sands and shale gas projects has now hit $20 billion in Canada. In 20-30 years, Canada may find itself in the same unenviable situation Americans are in today.

Some will insist that becoming China’s bitch is not inevitable for America. There is time to reverse the trend according to some experts. These experts are living in the past.

I think it’s already too late.

The Derailment of Climate Talks by Polluters

GRETA = the face of #CLIMAYE

I was born at 310 ppm. Shocking to see latest from

TIME TO CHECK OUT YOUR BANK

Staying well Below2°C is the principle objective of the Paris Agreement. It is the threshold humanity does not want to cross—the singular goal for decades to come.