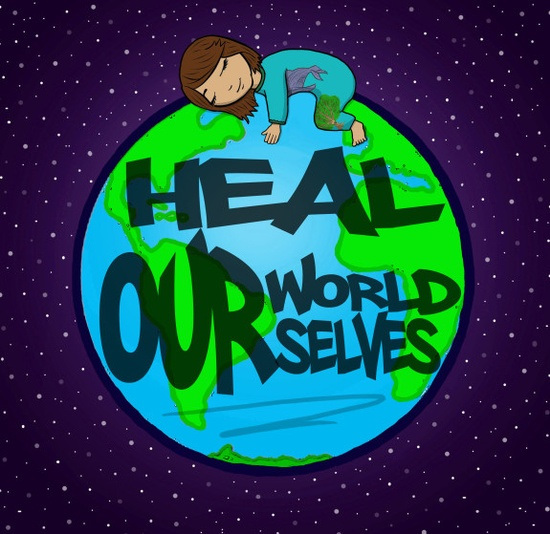 I‘m pleased to welcome Lynn Hasselberger as a first-time contributor to BoomerWarrior. This article was previously posted on her own I Count for my Earth blog (Editor ~ Rolly Montpellier).

Right now, many of our kids are being raised by pop culture and video games. As a mom with a 12 year old son who would play Minecraft 24/7 if I let him (I limit him to 30 minutes), I’d love to see that change. Not every child has the advantage of a working-from-home or stay-at-home parent who has the ability to monitor online activity and TV watching and/or the flexibility to guide him/her to different activities.

Mission of Heal Our World, Heal Ourselves Campaign

The campaign’s Mission is to increase positive children’s entertainment and includes this call to action:

We encourage mass media companies (television, radio, publications and social media conglomerates) to broadcast, highlight and print positive stories that support the healing of our worlds and implore them to increase the amount of children’s programming that illuminates, inspires and transforms.

There’s an open letter for which they are seeking signatories as well as a fresh urban dance/nature video in production for an Earth Day launch.

Today’s kids are digital natives, and spend onscreen an average of seven to 13 hours per day. Most of what they view on screen or commercial radio is vapid, if not violent, misogynist, or glorifying consumption, reflecting a world rife with addiction, violence and pollution. At the same time, children are facing unprecedented health crises.

Yet, children are born brilliant. There are countless examples of children using their creative genius to make the world a better place: Children are inventing cancer detection devices, creating organizations to protect amphibians and end slavery, and so much more.

If we tell stories that illuminate, inspire and transform our relationship with the natural world and one another, we heal ourselves and the planet. It is the campaign’s fervent hope to work together in solidarity to provide the opportunity for all children and parents with the option to enjoy and learn from stories that support the children’s healthy development.

The Call to Action:

In early 2014, the campaign will recognize excellence in transformational entertainment for children as well as youth change agents at the 2nd annual Imagination Heals event.

Signatory Organizations (as of April 14)

How You Can Help

If you and/or your organization has demonstrated a willingness and commitment to help make the world a more positive, healthier and safer planet, the Heal the World, Heal Ourselves Campaign would truly be honored if they could count on your participation in this life changing campaign.

There are many options available for your participation.

Will COVID-19 Build Bridges Or Generate Divisions In Canada?

Canada's five big banks are financing climate change. They hold almost 70% of the bank financing (46 billion) in the Tar Sands - RBC, Scotia, TD, BMO, CIBC.
As we face a climate crisis, this is unconscionable and morally reprehensible. #FireYourFossilBank

Share to raise climate awarenessI was excited to hear Michael Moore announce that he was releasing a new film—Planet of the Humans—on Earth Day. I have found a number of his films, in particular Bowling for Columbine and SICKO, thoughtful, funny and on the money. Unfortunately “Planet of the Humans” fails on all three counts.... Read more
CLEAN ENERGY

Share to raise climate awarenessWe at the Citizens’ Climate Lobby Canada are in the business of creating political will for a livable planet with a laser-focus on carbon pricing, long considered the best tool to reduce carbon emissions. This work must not stop even during the pandemic now gripping the world. Just because we’re in... Read more