Below 2C
Home Socio-Politico Society Our Techno-Fetish. Will it Destroy Us?
Share to raise climate awareness

Michael Murphy is a regular columnist on BoomerWarrior. In this article, he raises fundamental and essential questions about the role of humanity on Planet Earth (Editor ~ RMontpellier).

The excitement is spreading. Scientists are moving closer to an achievement once only dreamt of in science fiction. In not too many years, these experts may revive long-extinct species. The main target for now – the wooly mammoth. You can read about it in the current National Geographic cover story. All hail, this amazing technical wizardry! And no kidding – this really would be one astonishing success.

Climate Geo-engineeringTo be fair, the accounts of the would-be species revivers, including the NG piece, do explore the complexities and even the foolishness of this business. In addition to the wanton, greed-driven, extinction-threatening elephant campaign of the ivory smugglers, humanity’s relentless destruction of wildlife habitat is generally the main cause of species decline. So the simple question is – if we were to revive and restore mammoths and other species, where in the hell would they live? By the time these restored relics walk, the human population would be what, nine, ten billion?  But the interest in stories like this, to my mind, points up a very serious flaw in human nature, and it has many parallels.

You can also sense growing enthusiasm for climate geo-engineering. These are efforts to counter the effects that our greenhouse gas emissions are having on the atmosphere. The most popular are various schemes to block out some of the sun’s energy – including pumping sulfur particles into the upper atmosphere, deploying mirrors in space, seeding the oceans with iron, and other wild ideas.

Crisis in Our Plant Kingdom

And then there is the deepening crisis for the plant kingdom’s essential pollinators. Recent stories on the sudden and steep decline in monarch butterflies suggest that extinction

for those beautiful orange harbingers of summer could be just over the horizon. And new research points ever more strongly to our techno-agriculture model – in this case nicotinoid herbicides (see Monsanto) as the chief culprit in the shocking decline in honeybees. Without those tireless free servants to our agriculture, a whole array of crops is in serious jeopardy. (See this Scientific American article on at least one effort to fight techno-ag on behalf of the bees.)

What inextricably links these three stories is this. First, we are able to generate all sorts of energy around what I call technological whiz-bang. If we can conceive it, synthesize it, build it, we can find investors who see great profit potential. We worship those who produce man-made tech breakthroughs. But just try to generate similar enthusiasm around conserving the natural world. It is a constant, uphill struggle. Just this week, Monsanto for one is finding more support in our federal government. And on the energy/environment front, just check all these common-sense votes that that show the degree to which a healthy environment hangs in the balance right now. Just the same, we can find progress from time to time. The new clean fuel regulations are an example. And though Big Oil predictably wails, these have the support of the auto industry. Who could have predicted that?!

For a concerned citizen, impact on these issues varies. When it comes to protecting and saving pollinators, there are some hands-on remedies. As for elephants and other targeted wildlife, it probably comes down to supporting organizations doing good conservation work – such as World Wildlife Fund, the National Wildlife Federation and the Wildlife Conservation Society. On climate change, several organizations merit support, including the Union of Concerned Scientists, 350.organd the Climate Reality Project.

But the sad truth is – progress is often hamstrung by our gerrymandered system, which puts overwhelming power in the hands of this proud prince of pignorance, and a whole crowd of corporatist obstructionists (catalogued in the same piece). To make real progress, we need to end corporate personhood and the purchasing of politics once and for all. 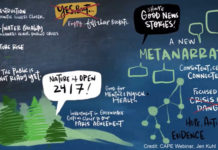 Climate Activism In A Global Pandemic

Share to raise climate awarenessI was excited to hear Michael Moore announce that he was releasing a new film—Planet of the Humans—on Earth Day. I have found a number of his films, in particular Bowling for Columbine and SICKO, thoughtful, funny and on the money. Unfortunately “Planet of the Humans” fails on all three counts.... Read more
CLEAN ENERGY

Share to raise climate awarenessWe at the Citizens’ Climate Lobby Canada are in the business of creating political will for a livable planet with a laser-focus on carbon pricing, long considered the best tool to reduce carbon emissions. This work must not stop even during the pandemic now gripping the world. Just because we’re in... Read more