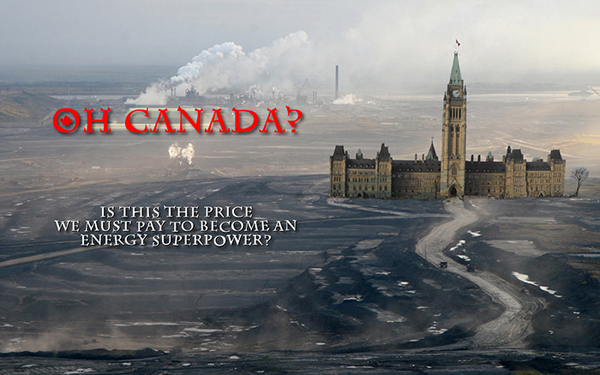 Franke James is the author of Banned on the Hill, a True Story about Dirty Oil and Government Censorship. James’ pictorial essays and honest writing are part of a campaign designed to expose the Harper Government’s obsession with developing the Oil Sands regardless of consequences for future generations. Banned on the Hill also exposes Harper’s disregard for scientists, non-profits and all who seek to oppose his vision of Canada.

Below2C is pleased to feature Franke James and is committed to supporting the Banned on the Hill campaign for a better Canada. I encourage you to do the same (RMontpellier ~ Editor).

Source of Video: Vimeo, Banned on the Hill, Franke James

Banned on the Hill: A True Story of Dirty Oil and Government Censorship from Franke James on Vimeo.

The seed was planted—awareness of how Harper is muzzling free speech in Canada has now spread worldwide,” says Franke James. “We need to keep the pressure on.”

“I thought I lived in a free country where you were allowed—and encouraged— to speak your mind. The government’s secret interference is really shocking, not just for me, but for all Canadians who think differently than our current Prime Minister. In a true democracy multiple points of view are allowed. The government’s insistence on controlling the message—to the point where people are silenced, and blacklisted, is a serious infringement on our rights.

Shockingly, the Government worked to shut down my show— and bully my supporters—simply because my climate change art was “advocating a message that was contrary to government policies”.

Canada, under the government of Stephen Harper, has exhibited little patience for dissent. The government has muzzled government scientists, insulted Nasa climate experts, and dismissed environmental protesters as dangerous radicals….released this week, shows how Canadian bureaucrats tried to silence James because her views on climate change clashed with the Harper government’s push to develop Alberta’s tar sands.

Banned on the Hill: A True Story about Dirty Oil and Government Censorship, released this week, shows how Canadian bureaucrats tried to silence James because her views on climate change clashed with the Harper government’s push to develop Alberta’s tar sands.

Franke James is a Canadian artist, author and activist. Her visual stories, games and videos are focused on the environment, ethics and social justice. Her 2012 story, What is Harper afraid of?, has prompted more than 7,924 people to write to their local MPs and the Prime Minister. Her interactive quiz, How many climate deniers could you fight off?, has been played more than 3,400 times, from Washington to Warsaw, Mumbai to Melbourne.

Banned on the Hill is Franke’s third book. Bothered By My Green Conscience and Dear Office-Politics: the game everyone plays, were both published in 2009.

Franke’s artwork and books have won awards and been featured in print, TV, radio and online in Canada, the USA and in many parts of the world. She is a member of The Writers’ Union of Canada, PEN Canada, and Canadian Artists Representation (CARFAC). Franke has delivered keynotes, speeches and workshops at educational events in Canada and the USA.

Franke has a Masters in Fine Arts from the University of Victoria, and a Bachelor of Fine Arts from Mount Allison University. She lives in Toronto, Canada where her favorite mode of transportation is walking. For more information, visit www.frankejames.com and follow her on Twitter: @frankejames

“Franke’s visual essays are brilliant and incisive and help shine a light on one of our country’s most pressing issues—the erosion of democracy. Her work should serve as an inspiration to concerned citizens everywhere.”
EMMA GILCHRIST, Communications Director, Dogwood Initiative

The Beginning of the End for Harper

The Harper Government is in decline. Recent polls show a drop in support for the Conservatives under Stephen Harper. Canadian voters will not tolerate a government which is insensitive to the needs of every day citizens. In 2015 (the next Federal Election), Canadians will turn away from a government which has muzzled scientists, dismissed protesters as dangerous radicals and legislated away the rights of charitable organizations and non-profit groups. Add a series of political scandals to the mix – Robocalls, the Mike Duffy affair, exceeding of election spending ceilings, the misuse of temporary foreign workers – to name a few, and you’ve got a recipe for disaster shaping up for the Conservatives.  There is mounting controversy over the lack of ethical standards, aggressive patronage appointments, a rut of scandals and high-level transgressions. “The arrogance is leading to a real indolence within the cabinet and it’s a tired brand and it’s a hurt brand now,” New Democrat MP Charlie Angus said. “It’s starting to do serious damage.”

The ineffectiveness of recent attack ads designed to discredit Justin Trudeau, the new leader of the Liberal Party of Canada, is another indication of the decline of the right wing leadership of Stephen Harper.  In fact, Trudeau’s popularity continues to rise and the Liberal Party continues to rebound from the  disastrous 2011 election. The Liberals raised a cool 1$ million in the first three weeks of Trudeau’s nomination.