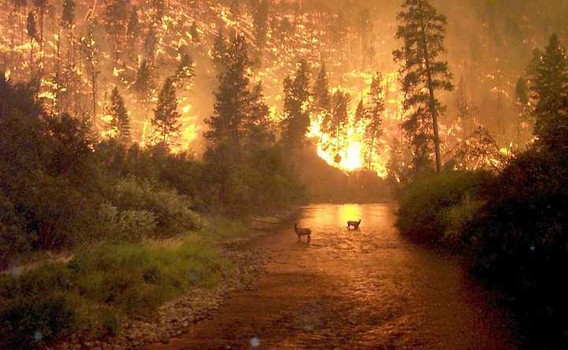 The imagery is powerful and symbolic. High-tech war weapons, including Blackhawk helicopters, fight Colorado’s Black Forest fire, now acknowledged as the greatest natural disaster in the state’s history. That fire is coming under control now, after it has killed two people and destroyed more than 400 homes. And though it turns out that the fire was caused, accidentally or criminally, by human activity, we must focus on the big picture.

That is, this fire comes just a year after a terrible Colorado fire season, and is undoubtedly a preview of an impossibly awful fire season across the West this year. That is owing to a Sierra snowpack at a tiny fraction of average. And though some insist on blaming this crisis on “the hand of God,” (listen to the fellow in this NPR story on the fire say just that), the inescapable conclusion is this – our greenhouse gases will continue to further dry out many drought-prone areas, as well as build more sudden, violent storms and resultant floods.

We have no problem – indeed, no choice – but to roll out a massive, military response when the individual weather events occur. After all, fires must be extinguished, flood victims must be saved and relocated, storm surge damage must be repaired. But the irony is this – as we muster the will to repair and adapt, there remains sinfully little commitment to reduce the activity that causes these problems in the first place.

We are now into Adaptation and Mitigation

In a predictable shift, there is more talk of adapting to climate change. No problem with that – it was an activists’ pipe dream, the notion that we could cut greenhouse gases without also promoting mitigation and adaptation, but it is past time to bust up the irony. That is, throwing resources at adaptation to droughts, floods, sea rise – and this will take an ever-mounting treasure to fund – while doing so little to halt the problem in the first place suggests a fire metaphor. It is like fighting a fire with one team, while other, much bigger teams, continue to heave ever more fuel into the blaze.

The current situation – though President Obama says some of the right things about climate change, he is doing little to follow through. This article talks about FEPA – one of the tools at his disposal that does not involve dragging along a recalcitrant, oil-bought Congress.  And of course, Obama needs to nix the Keystone XL pipeline, an enabling pathway to the dirtiest oil on the planet. This Climate Progress piece hints that the President may unveil his climate change strategy in July. (It also contains a wealth of links to climate change stories.) CNN commentator and author Van Jones strikes just the right note in this article highlighting the importance of Obama’s decision on Keystone.

What we need is a World War II-style commitment to solve the climate crisis. We hold out hope that President Obama takes a cue from the great FDR in his final term, and right now the jury is still out. Kelly Rigg’s commentary on HuffPost may be a year old, but it makes strong points and includes some insightful graphic support. I hate quoting President George W Bush, though sometimes in spite of himself he said something intelligent. Such was the case when he said “We must, and we will, confront threats to America before it is too late.” Forget for a moment that the Decider was chest-pumping on his ginned-up, stove-piped case for invading Saddam’s Iraq, and think about that spirit as a rallying call to solve the climate crisis while we still can. It will take a war-level commitment from everyone, but the payback will be enormous. It starts with a carbon tax or fee, and it ends with a sustainable economy. Forget President W’s response to what we could do to support his Iraq war effort (“buy something”), we all can (and must) pitch in on this one.

This article was previously posted on IBI Watch.

You can also find Michael on Facebook and his blog IBI Watch.

Welcome to BoomerWarrior. It’s For YOU!