Warning: A massive cyclone is forecast to develop in the Arctic, as shown on the image below, from the Naval Research Laboratory.

Within 2 weeks the Arctic Ocean will be completely transformed. The cyclone that appears a few days out on both the US and European ten day forecasts will massacre the sea ice in what I call “The Great Arctic flush”.

The image below is a forecast for Arctic sea ice speed and drift on July 27, 2013. More images, including animations, on Arctic sea ice can be viewed at Arctic Movies and Snapshots.

Last August, a massive cyclone formed over the Arctic Ocean and destroyed 800,000 square km of ice in about a week. The predicted cyclone looks to be as strong as the one in early August, 2012. Problem is, the ice is much weaker, thinner and fractured this year; including all the ice just north of the Canadian Arctic Archipelago that is 4 or 5 meters thick; this ice is mobile, broken, fractured ice piled up into ridges; it is not multiyear ice (MYI) at all.

The above image, from the Naval Research Laboratory is a prediction of ice speed and drift a few days from now, showing the motion of the ice, the darker and redder the faster, the ice is being set in motion by the cyclone above. Since the Coriolis force flings things to the right, the ice is all sent to the outside of the rotation, into the warmer surrounding water as well as the Atlantic Ocean. The storm surge of a foot or two over the entire basin (highest near the cyclone eye) will draw in warm water from the Pacific via the Bering Strait and from the Atlantic via the Fram Strait.

It will also mix the fresh water on the surface from melting ice with warmer saltier water from below. It will generate lots of churning and grinding of the ice and waves several meters high. Warm and smoky air that is filled with ash and black carbon from burning fires in the far north will drop the albedo of the ice and increase the solar absorption.

When I forecast zero sea ice at the end of the melt season this summer, I fully expected at least one or more of these massive cyclonic storms. Last year it occurred in early August, and lasted for about 8 days. In the rest of the melt season last year no other huge cyclone developed, although several small ones did. Perhaps the cyclone disturbed the ocean conditions enough to prevent subsequent ones occurring. We shall see this year… 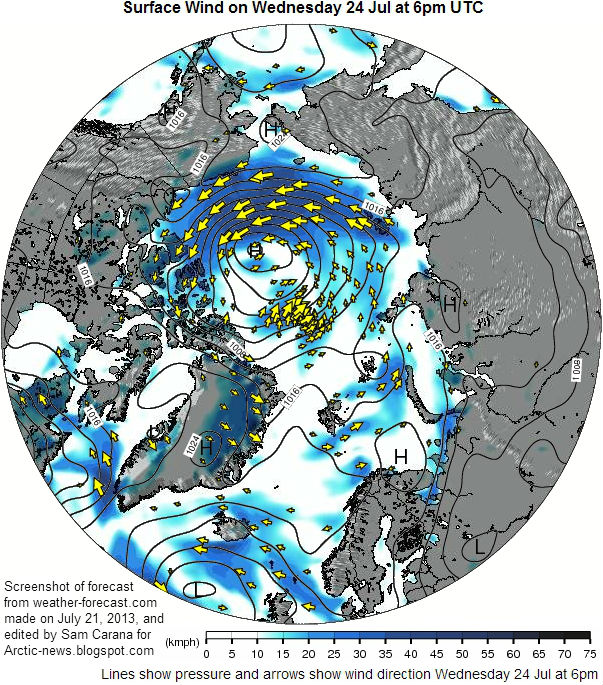