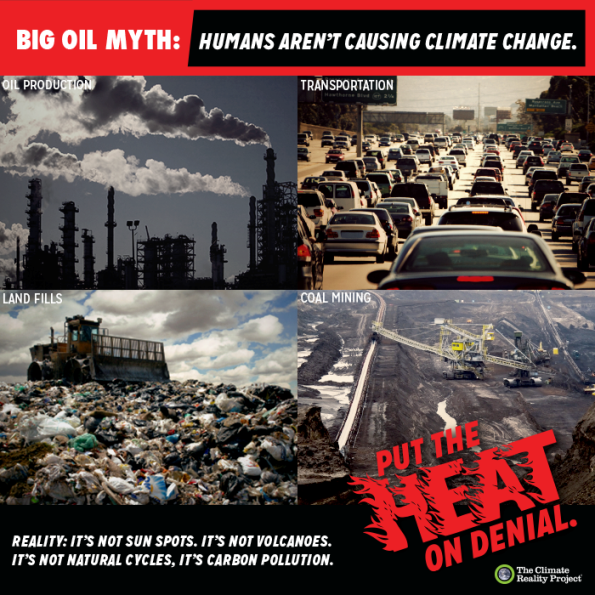 As a registered Climate Leader (Climate Leadership Corps) I’m using resources made available to me to disseminate the message about climate change. The following includes text from a Climate Reality Project email and excerpts from a Washington Post article featuring Al Gore. (Editor: Rolly Montpellier)

In a recent interview with popular Washington Post columnist Ezra Klein, Al Gore says he’s more optimistic than ever that the issue of climate change has reached “a tipping point”. We continue to face many challenges and we still have a long road ahead of us to solve climate change once and for all. But together we’re making real progress, and the tide is starting to turn in our favor, both culturally and politically. And that’s reason to be hopeful. Read the excerpts.

A Whole Lot of Hope

We have already crossed the 400 parts per million mark. We crossed it earlier this year. The question now is how high it will go before we begin bending the curve. But in spite of the continued released of 90 million tons of global warming pollution every day into the atmosphere, as if it’s an open sewer, we are now seeing the approach of a global political tipping point.

The appearance of more extreme and more frequent weather events has had a very profound impact on public opinion in countries throughout the world.

A second factor is the sharp and unexpectedly steep decrease in prices for electricity produced from wind and solar and the demand destruction for fossil fuel energy from new efficiency improvements….we’ve crossed that threshold and in the next few years we’re going to see that crossed in nations and regions containing most of the world’s population.

We are seeing dramatic progress towards new policies in China, Korea, Ireland. We’ve seen a coal tax in India. We’ve seen changes in Australia, the largest coal producing nation. We’ve seen Mexico take a leadership position. We’ve seen action in California and other states. And some 17 other countries are in various stages of adopting either a cap and trade or carbon tax or both.

It’s not unusual to find big political shifts that take place beneath the surface before they’re visible above the surface. A lot of Republicans have shared with me privately their growing discomfort with the statements of some of the deniers in their ranks…  you see it at the local level a bit more than at the national level. You see these state initiatives and laws. And you see maybe the biggest shift of all in the business community.

Reality has a way of asserting itself

There has been a 100-fold increase in the number of extreme, high-temperature events around the world in the distribution curve. And people have noticed for themselves — the rain storms are bigger, the droughts are deeper and the fires are more destructive. All of these things have not escaped notice and people are connecting the dots.

The cumulative amount of energy trapped by man-made global warming pollution each day in the earth’s atmosphere is now equal to the energy that would be released by 400,000 Hiroshima bombs going off every 24 hours. It’s a big planet, but that’s a lot of energy.

The consequences are now hard to escape. Every night on the news, it’s like a nature hike through the book of revelations. Eleven states today are fighting 35 major fires! People are noticing this. And simultaneously they’re noticing the sharp drop in the cost of carbon-free, greenhouse gas-free energy, and the combination is pushing us over this political tipping point and the trend is unstoppable.

The deniers are being hit politically. They’re being subjected to ridicule, which stings. The polling is going back up in favor of doing something on this issue. The ability of the raging deniers to stop progress is waning every single day.

Don’t get me wrong. We’ve got a long way to go. We’re still increasing emissions. But we’re approaching this tipping point. Businesses are driving it. Grass roots are driving it. Policies and changes in law in places like India and China and Mexico and California and Ireland will proliferate and increase, and soon we’ll get to the point where national laws will evolve into global cooperation.

Rolly is also a registered Climate Leader (Climate Reality Leadership Corps) a blogger, an activist and a writer.

Welcome to BoomerWarrior. It’s for You!