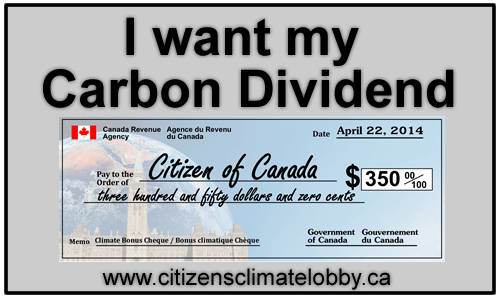 There is one thing stronger than all the armies in the world, and that is an idea whose time has come. According to Joseph Stiglitz, the world-renowned global economist and Columbia University professor, putting a price on carbon is a no-brainer. “I believe that over the long run we will have to have a carbon tax, the world will come around to this,” says Stiglitz.

Carbon Fee and Dividend. Its Time Has Come

The World Bank recognizes the urgency of pricing carbon and supports recent attention on carbon coming from around the world:

The choice of instrument for putting a price on carbon will vary widely. There are two main types of carbon pricing: Emissions Trading Systems and Carbon Taxes. The choice of mechanism depends on the political and economic circumstances of each jurisdiction: country, province, state, city.

The study examined a tax on the carbon-dioxide content of fossil fuels. The tax would start at $10 per ton, increasing at $10 per ton each year. Revenue from the tax would be returned to households in equal shares as direct payments. Under this approach, the REMI study found that recycling the revenue back into the economy would add 2.1 million jobs over ten years. Improvements in air quality would save 13,000 lives a year. Emissions would decline by 33 percent.

What this study shows is that by giving the revenue back to the people, a carbon tax will actually stimulate the economy,” said Mark Reynolds, executive director of Citizens Climate Lobby, which commissioned the study. “The big knock on a carbon taxes has been that it would kill jobs. That assumption is now blown out of the water. (Source: CCL Press Release)

First, it’s probably the simplest carbon pricing option. The carbon fee would be implemented at the point of entry (well, mine, or port), and we already have a system in place to return the dividend to citizens during annual tax filings.

Second, it’s probably the most feasible option to implement, from a practical and political standpoint. The dividend offsets the cost of the carbon fee for most people, so there is minimal financial impact on the public. A carbon fee and dividend system has been implemented in British Columbia since 2008 with great success – the economy is doing well, emissions are down, and citizens have seen no net increase in taxes.

“There are also reports that interest in a carbon fee is ‘creeping up’ among US Senators…..a number of prominent politically conservative figures support the carbon fee and dividend system,” says TheGuardian.

For further information about the group, see the CCL FAQ, follow its local chapters on Facebook and the main group on Twitter, and/or attend its annual conference this weekend.

Finally, a carbon tax that makes sense. Carbon Fee & Dividend is truly an idea whose time has come.
_____

Rolly Montpellier is the Founder and Managing Editor of BoomerWarrior.Org. He’s also a  Climate Reality leader (Climate Reality Leadership Corps), a blogger, an activist and a Climate Change presenter.
He has been a contributor to the Climate Change Guide, The Canadian, ClimateMama, The Hill Times, World Daily, Georgian Bay News, The Elephant, CounterCurrents, 350Ottawa and MyEarth360.