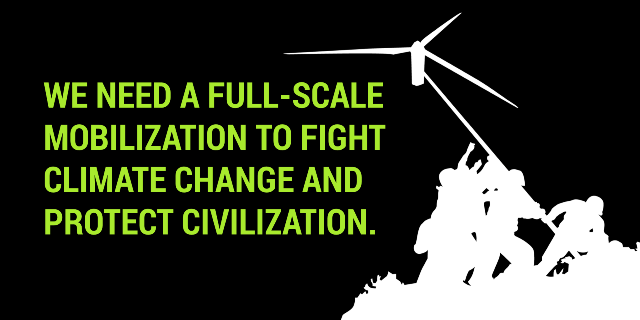 Margaret Klein (The Climate Psychologist) is one of the founders of The Climate Mobilization project. Although this project is focused on the American climate change challenge, people all around the globe are increasingly aware and deeply concerned about the survival of future generations in a progressively hostile climate. I urge BoomerWarrior followers from North America to Europe to Australia to support this campaign. (Rolly Montpellier~Managing Editor)

Sometimes doing your best is not good enough. Sometimes you must do what is required. Winston Churchill

The Climate Mobilization is a growing group of people who know that climate change threatens the collapse of civilization within this century. We believe, along with many well-respected scientists and environmental analysts, that the only way to preserve a climate that is safe, stable, and supportive of human civilization is to fight climate change with a World War II-scale mobilization.

The Pledge to Mobilize – a political platform and social movement strategy – is a tool that can make this possible.

View the slideshow (for an  overview!)

Signers publicly acknowledge climate change as a threat to civilization and call on the US Federal Government to instigate a WWII scale mobilization to fight back. Signers pledge their support to politicians who have also signed the Pledge, and, critically, promise to spread the Pledge to others– their friends, family, and communities. In this way the Pledge is both a democracy re-boot and a viral strategy.

The Pledge was designed to overcome psychological, cultural, and technological barriers to engagement in order to make the climate crisis real for people and bring about a cultural transformation.

The Pledge’s demands are not idle words.

Signing the Pledge to Mobilize commits you to supporting political candidates, on the local, state, and national level, who have also signed the Pledge. This creates a challenge, and an opportunity, for sitting politicians and their opponents: Will they sign? Will they acknowledge that climate change threatens the collapse of civilization and muster the courage to fight back? As more people take the Pledge, it will become an ever more effective political tool.

Spreading the Pledge can transform our culture of denial into one of truth, courage, and active engagement.

Rather than finding a “politically realistic” solution that does not address the scientific realities and cannot prevent the collapse of civilization, our goal is to fundamentally alter what is realistic. Spreading the Pledge can instigate millions of conversations about climate change, fostering a culture of dedicated emergency response. The media will stop asking politicians, “Do you believe in climate change?” and start asking them, “Will you fight for civilization or not?”

We are ready to start spreading the Pledge to Mobilize. But we need help.

By raising only $20,000 we will be able to launch the Pledge to Mobilize nationally.  Your donation will help us get there. We will use (approximately):

**NB The Climate Mobilization is a 501c(4) Non-Profit. This status allows us to pursue a political agenda. Unfortunately, however, it means that donations are not tax deductible.**

Our initial goal is to help the 5.4 million Americans who are “alarmed” about climate change mobilize themselves with maximum efficacy. Our ultimate goal is a climate that is safe, stable, and supportive of human civilization. We hope that you donate, that you work with us, and that you sign the Pledge and mobilize with us!