Below 2C
Home Climate Climate Action Why? Why Not? 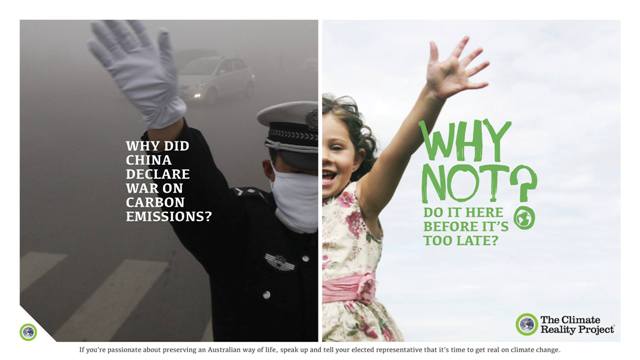 From the Climate Reality Project~Let’s Ask the Tough Questions

Why? Why Not? In every language on the planet, children ask these questions over, and over, and over. They ask the first to understand the world around them, and they ask the second when they want to change that world.

We want people of all ages to ask those questions—of their friends, their social networks and, most importantly, their elected representatives—and keep asking them until the lies of the deniers and their vested interests run out.

Remember when you were a kid experiencing things like skyscrapers and firetrucks and mailmen for the first time? You were new in a world other people had made and, being a kid, you wanted to know why they’d made it like that. Why not make it like this instead? So you asked. And asked again until your parents ran out of answers and then ran out of energy to answer. While you may have quieted down, in your heart you never settled for “Because that’s the way it is.” Because that’s not an answer.

When it comes to our climate, it’s time to start asking questions again. Why do we rely on fossil fuels that create so much carbon pollution and cause so much devastation? Why do oil and gas companies get to decide what kind of air we breathe or what kind of future our children inherit? Why not switch to renewables like solar and wind that can power our economy reliably and cheaply? Why not act now while we can still avoid the worst impacts of climate change? After all, if we could start with a clean slate and a world of options, would we really choose fossil fuels?

As world leaders prepare to work on a new agreement on climate action to replace the Kyoto Protocol, we figured it was time to ask them. So we created our new campaign Why? Why Not? to encourage people around the planet to ask their officials these simple questions about climate change and what their nation is doing about it.

It starts with the United Nations Climate Summit, taking place in New York on September 23. Convened by U.N. Secretary-General Ban Ki-moon, the Climate Summit is the first step toward the main event at the U.N.’s Conference of the Parties 21 in Paris in December 2015. In Paris, leaders have the opportunity to boldly rise to the challenge of climate change and make real and binding commitments to carbon reduction – or shrug their shoulders and kick the can down the road once again.

To make sure they don’t, we have to start spreading the word and asking them “Why?” and “Why not?” questions on climate now. That’s why we’ve started a contest inviting young people between 13 and 21 – those who will have to live with the consequences of our answers and those with the most to lose – to make a video asking world leaders a “Why?” or “Why not?” question on climate change. We’ll choose the six best and fly the creators to New York to join us as we present their questions to decision makers at the U.N. Climate Summit. To learn more or enter, visit www.askwhywhynot.com.

With the opportunity of Paris coming, it’s time to start asking our leaders why we keep pursuing destructive energy policies – and making them answer. After all, the stakes are too high to settle for “Because.”

Rolly Montpellier is the Founder and Managing Editor of BoomerWarrior.Org. He’s also a Climate Reality leader (Climate Reality Leadership Corps), a blogger, an activist and a Climate Change presenter. You can also follow him on Facebook and Twitter.

He has been a contributor to the Climate Change Guide, The Canadian, ClimateMama, The Hill Times, World Daily, Georgian Bay News, The Elephant, CounterCurrents, 350Ottawa and MyEarth360.