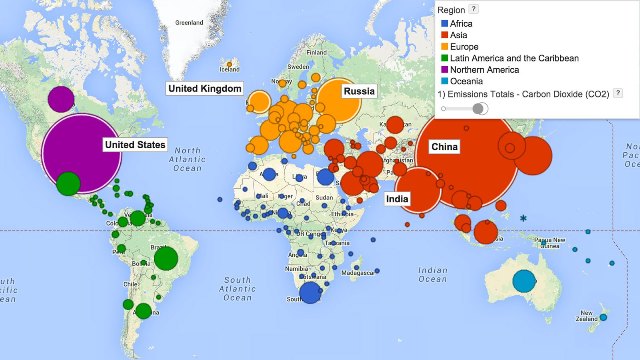 We know we’ve got a carbon problem and we know it’s killing the planet. So what can we do to kick the habit?

Climate change is the defining challenge facing humanity today. And we’ve known this for long enough – over 20 years, in fact. Still, carbon emissions are on the rise, and with each passing day, we’re losing valuable time to set things right. So what are we to do?

The first step to solving a problem is admitting you have one – and understanding why we’re in the predicament we’re in. Here are five images showing the scale of our carbon pollution problem – and how the two largest emitters are starting to clean up their acts.

The Carbon Problem and Solutions in Five Images

The carbon budget is the estimated amount of CO2 the world can emit to limit global average temperature rise to 2 °C above pre-industrial levels. And, if we keep the world from warming that extra 2 °C, we’re likely to avert the most dangerous climate change impacts.

Unfortunately, we’ve already used up over 52 percent of our total carbon budget, leading one analyst to quip, “If this were a bank statement it would say our credit is running out.” And instead of slowing down our carbon spending, we’ve been racking up more charges.

2. The Scale of our Emissions

Over the years, as industrialization has spread and world economies have burned more and more fossil fuels, carbon pollution has ballooned – particularly in the United States and China, as seen by the enormous, growing circles on the animation above.

Last year, the world’s carbon pollution emissions hit a record high of nearly 40 billion tons.  What’s more, we are currently on track to top that record, reaching over 40 billion tons in 2014.

We know that carbon dioxide causes climate change, and if we can limit carbon dioxide, all those terrible catastrophes that one film predicted could be avoided – or at least minimized.

So what, if anything, are the biggest polluters doing to stay in our carbon budget?

China, the world’s largest carbon polluter, is becoming a leader in clean energy.

In addition to bulking up its renewable energy sources, China has implemented a pilot cap-and-trade system in six cities and provinces, with a national carbon market set to begin in 2016.

Another positive sign that China is cleaning up its act  is that the nation is planning to cap its coal use by 2020.  to reduce its reliance on the dirty energy. Furthermore, the country won’t build any new coal-fired power plants around the densely populated cities of Beijing, Shanghai, and Guangzhou.

While the country has made efforts to control the resulting air and carbon pollution, it still relies upon coal for the majority of its power and is actively building new facilities. Recent actions, however, show that China is serious about cutting its emissions, shifting its energy sites to renewables and scaling back its reliance on coal.

With China taking climate action, all eyes are on the next-largest emitter: the US.

China’s plan to reduce emissions is ambitious. And with the US and China – the world’s two biggest carbon polluters – recently agreeing to reduce their emissions, climate progress is happening. But how will the US achieve its stated target of reducing carbon pollution by 26–28 percent below 2005 levels by 2025?

The sad truth is that carbon pollution has been steadily on the rise in the US, “driven largely by an increase in coal use for power generation,” according to the US Environmental Protection Agency (EPA).

In the US, power plants are responsible for 40 percent of carbon pollution. But while there are limits on the amount of mercury, sulfur, arsenic, cyanide, soot, and lead that plants can emit, there are no limits on carbon pollution… and Big Polluters are taking full advantage of that lack of oversight.

There’s a light at the end of this coal-train tunnel: the EPA has proposed a “Clean Power Plan” that includes limits on the amount of carbon dioxide that power plants can emit, which will reduce emissions by 30 percent from 2005 levels and decrease soot and smog by 25 percent in 2030.

In this highly polarized political climate, it’s hard to believe that a large majority of Americans can agree on anything – let alone on climate action. But it’s true – 70 percent of Americans agree that there should be limits on carbon pollution from power plants. And a clear majority exists on both ends of the political spectrum.

This article was previously posted on The Climate Reality Project.

We’re the first generation to feel the impacts of climate disruption, and the last generation that can do something about it~Jay Inslee.