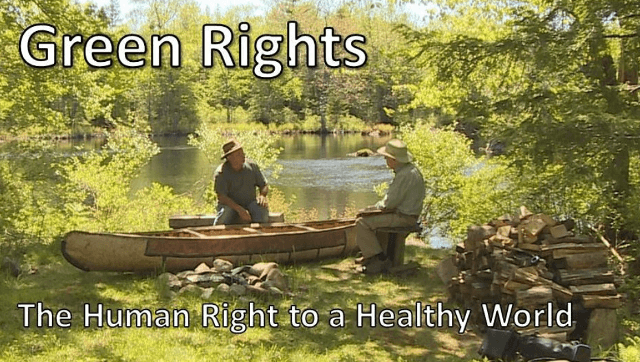 The Green Rights project is about peoples’ right to Air, Water, Food – the very sources of life. Without them, we die. And in most nations – more than 180 nations, in fact, citizens are legally entitled to these essential elements of life.

But not in Canada or the United States. And that’s what the Green Rights multi-media project is all about: the human right to a healthy environment, and Mother Nature’s right to be respected and protected.

Your Green Rights – the Film

Green Rights is about the dramatic, innovative legal battles going on in nations around the world: The Philippines, Argentina, The Netherlands, Ecuador. It reports on dramas in the courts and on the land, where devoted citizens and courageous lawyers take on national governments and global corporations – and win. And it asks, Why not in Canada? Why not in the US?

The capstone of the Green Rights project is a feature-length documentary, Green Rights: The Human Right to a Healthy World. You can view the four-minute trailer below.

The film was produced and directed by master videographer Chris Beckett, and written and hosted by noted author Silver Donald Cameron. Cameron and Beckett are also the producers of The Green Interview, a subscription website that now includes extended interviews with nearly 100 green warriors from all over the globe.

Silver Donald Cameron is also the author of the Green Rights book, Warrior Lawyers: From Manila to Manhattan, Attorneys for the Earth – fifteen interviews with trailblazing lawyers from nine countries, plus a wide-ranging interpretive essay by the author.

Warrior Lawyers begins with a saucy, entertaining essay of 13,000 words exploring the concept of environmental rights, recounting some spectacular success stories rooted in those rights, and articulating the lessons and strategies that can be drawn from those victories. The essay is followed by lightly-edited Green Interviews with the 17 pioneering lawyers from eleven nations whose stories are at the heart of the essay.

“Moving, terrifying, inspirational – these stories stand as a beacon of hope in our troubled world,” says Maude Barlow of the Council of Canadians.

“You get to the end,” says celebrated environmental journalist Alanna Mitchell, “and you realize you have feasted on revolution and hope.”

You can order the book at this link: Warrior Lawyers.

After the release of the book and the film in September, 2016, Don and his wife Marjorie embarked on a transcontinental promotional tour from their home in Nova Scotia, lecturing and speaking about the book and related topics, and screening the film, in universities right across Canada. Marjorie Simmons, also an author, promoted her own new book, Year of the Horse. They travelled by motorhome along with their Shetland Sheepdogs, MacTavish and Franki. The promotional tour was featured in the National Observer.

I had the privilege of meeting both Don and Marjorie at a Senate Speaker’s reception during their stop in Ottawa. The reception was followed with the official launch of the film in the Pearson Ballroom of the Lord Elgin hotel.

All of the material for this post is sourced from the Green Rights project.

Silver Donald Cameron is a versatile author, executive producer of The Green Interview as well as a distinguished educator. As a writer his subjects include history, politics, public affairs, travel, literature, community development, nature and the environment. Don is married to Marjorie Simmons, also an award-winning author and essayist. You can find out more at About Silver Don Cameron.