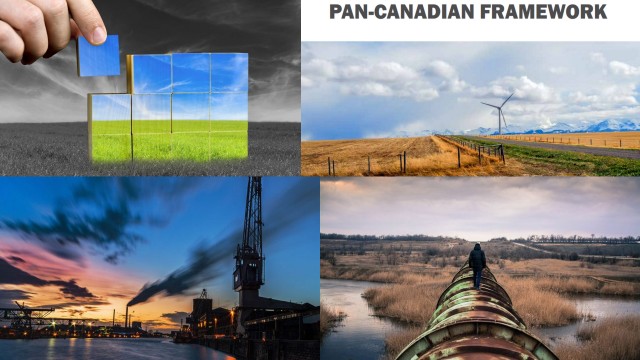 Canada’s role at COP24 was again somewhat schizophrenic. The Canadian team is said to have played a key role in the negotiations that led to the adoption of the rulebook that will govern how the Paris Accord will cut emissions and curb global warming. “Our team worked hard throughout the negotiations to find common ground between developed and developing countries,” said Catherine McKenna (Minister of the Environment and Climate Change).

And yet upon McKenna’s return to Ottawa, her government announced a new handout of $1.6 billion to the Alberta oilsands despite already purchasing the Trans Mountain pipeline for $4.5 billion earlier in 2018.

Canada’s behaviour at COP conferences is not the problem. We behave as a good climate leader should. We play that role quite well. But “what matters most is what everyone does when they leave Katowice and go home,” said Catherine Abreu, executive director of Climate Action Network Canada. It’s what we do when we’re not at the conferences that matters.

Back home Canada continues to undercut its own climate action plan by its shameful promotion of fossil fuel expansion. A report released at the conference by Environmental Defence and Stand Earth shows that emissions will continue to rise, making it virtually impossible for Canada to meet its current Paris targets let alone the more ambitious targets promised by McKenna for 2020. The report exposes that intensive lobbying from the oil sector means about 80% of those emissions will be exempt from the federal carbon price.

The following consists of segments from Canada’s Contradiction from Yearbook 2018 by The Energy Mix.

Year of Climate and Energy Contradictions

2018 was the year Canada’s policy contradictions on climate and energy came home to roost, as the government of Prime Minister Justin Trudeau tried to square its enthusiastic embrace of the Paris Agreement with its equally avid support for the country’s carbon-emitting fossil industry. With the federal election coming up in October 2019, and an equally momentous vote in Alberta scheduled for May, the story intensified through the year, and the fault lines became ever more obvious.

Trudeau’s determined effort to chart a middle course between fossil dependency and climate responsibility earned him angry rebukes from both sides of the line, with a growing number of columnists and analysts concluding that he can’t have it both ways. The single biggest story of the year was the federal government’s decision to give in to an ultimatum from Houston-based Kinder Morgan Ltd. and spend C$4.5 billion to buy taxpayers a 65-year-old pipeline. That decision produced a sense of utter betrayal from Indigenous and other pipeline opponents—while fossils, incredibly, still accused the government of showing inadequate support for their failing industry.

In the end, analysis showed Canada falling massively short of its Harper-era carbon target under the Paris accord and unable to hit the target if it continued to insist on scaling up oil and gas production. One assessment showed carbon pricing eliminating 90 megatonnes of greenhouse gas emissions by 2022, but still leaving the country 90 megatonnes short of a Paris goal that Trudeau and Environment and Climate Minister Catherine McKenna had described as a floor, not a ceiling, for Canada’s climate ambition. Other analyses said Canada needed a higher carbon price and a wider suite of policy tools to get the job done, and the federal “backstop” price on carbon was on track to add 100 megatonnes to Alberta coal emissions.

Yet the strongest assurances the government offered had to do with the certainty of new fossil projects. Even after Canada signed on to a new high-ambition declaration, McKenna declined to strengthen the country’s carbon target. Earlier in the year, she attributed the country’s emissions gap to economic growth and expressed her continuing commitment to the Paris target.

Pipeline to Tidewater: A False Narrative

The battle over Canada’s energy future was driven in large part by the shaky proposition that a prosperous future awaited Alberta, if only the stars aligned to build new pipeline capacity to tidewater. As the year progressed, it became ever clearer that that storyline was false at worst, woefully incomplete at best.

The basic claim—repeated and repeated again by industry executives and Notley—was that the Alberta and Canadian economies were losing many millions of dollars per day because of the deep discount oilpatch producers had to offer for the Western Canadian Select crude oil they sell into world markets. Just get a pipeline built, they claimed, and a price differential in the range of C$50 per barrel would be cleared, or at least mitigated, bringing new benefits to the industry and the provincial economy that depends on it.

The intensity ratcheted up through the fall, as falling world oil prices drove the discounted Alberta market to the point of crisis. By mid-November, major tar sands/oil sands producers were berating each other for taking “windfall profits” by grabbing all the available pipeline space they could, and the “swashbuckling free marketeers” in the oilpatch were doing precisely what you might expect: losing patience with governments for not stepping in with a fully baked solution to their problems, warning of a new wave of western Canadian separatism, accusing/not accusing Ottawa of treason, even risking the appearance of insider trading by participating in a meeting with Notley to discuss measures to restrict production volumes. Cenovus Energy urged governments to impose production cuts to drive up fossil revenue, and Notley complied.

“The grade of oil that Alberta sells into world markets, Western Canadian Select, hit a rock-bottom price of US$13.46 per barrel,” The Energy Mix explained at the height of the industry’s mid-November hyperbole, “its lowest since Bloomberg began keeping track in 2008.

‘People Will Die’ to Get a Pipeline Built

But the harshest attacks from fossils and their supporters were reserved for campaigners on the front lines of the Trans Mountain fight. While Berman may have been the highest-profile target, she wasn’t alone. Former Bank of Canada governor David Dodge casually and chillingly suggested that “people will die” on the protest lines at Burnaby Mountain, asserting that killing off a few “extremists” might be the price Canada would have to pay to get the Trans Mountain expansion built.

A more sober assessment by senior economist and former insurance CEO Robyn Allan showed it was Alberta’s inferior tar sands/oil sands product, not the lack of market access, that was driving down the price the province could charge for its product. Later in the year, analysts at BNN Bloomberg agreed that a new pipeline would not eliminate the price discount on a lower-quality form of crude oil that is tougher for refineries to process.

In an exclusive, six-part series for The Energy Mix, award-winning investigative reporter Paul McKay pointed to global competition as a fatal flaw in Alberta’s tar sands/oil sands export plans, traced the business partners Ottawa might have to sign on with to get the pipeline built, assessed the impact of new emissions controls for international shipping on Alberta production, calculated the starkly unfavourable math Canada had accepted by buying the pipeline, and made the case that Teck Resources’ proposed new tar sands/oil sands megaproject is a “dead mine walking.” Some observers speculated that Teck may not even plan to build the mine—it just wants a plausible enough appearance of that plan to set the stage for a Kinder Morgan–style bailout.

Alberta’s oil and gas royalties plummeted while production increased, even though the province’s fossil companies remained incredibly profitable through a sustained oil price crash. A few months of higher oil prices fueled optimism but not euphoria in the oilpatch before prices crashed again; labour-saving efficiencies wiped out thousands of Alberta fossil jobs; and declines in investment, jobs, and tax revenue pointed to the end of the tar sands/oil sands era.

The head of the Alberta Energy Regulator resigned after revealing the province could face up to $260 billion in unfunded oilpatch liabilities. The carbon liabilities facing the province’s five biggest fossils were calculated at $2 trillion. Équiterre said a spike in pipeline incidents showed up the industry’s safety claims as “meaningless marketing mantras,” and Albertans were set to bear the clean-up costs for 155,000 abandoned oil and gas.

Conservative Party leader Andrew Scheer was looking forward to making carbon pricing a ballot issue in the 2019 federal election, but was expected to pay a price at the polls for opposing carbon pricing and supporting pipelines. The federal backstop price earned support from a conservative-led think tank, the Globe and Mail, a normally critical climate hawk, and public opinion for promising a carbon price rebate in almost every mailbox.

And so ends 2018 with a mixed bag of climate and energy contradictions. We can expect more of the same in 2019 leading up to the October federal election. It’s time to buckle up.