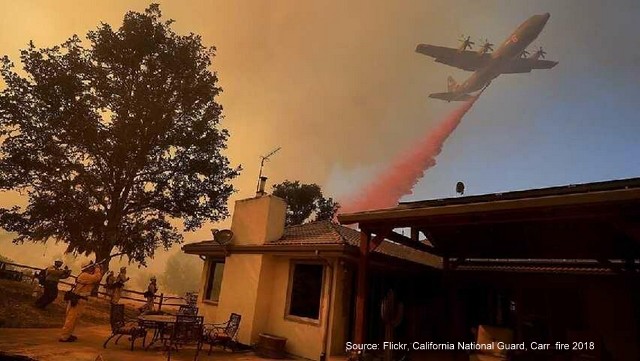 “California is catching a glimpse of its future summer weather. The view is a hellish one,” writes Dana Nuccitelli in his latest Yale Climate Connections article featured in this post. As California Governor Gavin Newsom put it in a recording for the Democratic National Convention, “Climate change is real. If you are in denial about climate change, come to California.”

Glimpse of a Hellish Future

Within a two-week span in August, California saw:

These ghastly scenes all bear links to climate change, and as a result, climate scientists expect them to occur more frequently in the future as global warming continues to raise temperatures and dry the landscape.

Better yet, don’t. At least not right now.

“Climate change is real. If you are in denial about climate change, come to California.” — Governor Gavin Newsom

California’s severe August weather is linked to a ridge of high pressure, also referred to as a “heat dome,” stuck over the American Southwest. The heat dome pulled moisture from a tropical storm in the Pacific, fueling rare summer storms that triggered the thousands of lightning strikes that have ignited wildfires across the state. The hot air inside the dome contributed to the record heat, which evaporated most of the storm’s precipitation before it could reach the ground. The hot and dry conditions on the ground created more fuel for the fires to spread farther and faster.

According to meteorologist Ryan Maue, as reported in the Washington Post, almost all of the high-powered heat domes over the past six decades have occurred since 1983, and the overwhelming majority of those since 1990. Climate scientists will need to investigate the role that climate change played in the evolution of this particular heat dome. However, a growing body of research suggests that human-caused global warming increases the frequency with which such high-pressure ridges get stuck in one place for long periods of time as a result of wavy patterns forming in a slowed jet stream.

To Penn State climate scientist Michael Mann, lead author of a 2018 study on this subject, the heat dome in the American Southwest looks familiar.

“The extreme heat out West right now is associated with a very strong, stable ridge that resembles, in both its persistence and intensity, the ridge that gave us unprecedented heat, drought and wildfire out west in mid-summer 2018,” Mann said in an email exchange. “Knowing that, I would venture a guess that the same atmospheric phenomenon (planetary wave resonance) that was responsible for that setup and the unusually persistent weather extremes in Europe and elsewhere at that time might be playing a role here too. But that assessment will need to be performed by actually doing the diagnostics.”

Climate change has played a key role in worsening western wildfires. In a new study in Environmental Research Letters, a number of foremost experts on California wildfires concluded that the combination of rising temperatures and declining autumn rain—both of which are linked to climate change—over just the past four decades has more than doubled the number of fall days with extreme fire weather conditions. Those findings are consistent with a 2016 study concluding that human-caused climate change doubled the area burned in western U.S. forests since the 1980s.

President Trump, as he has done previously, again blamed the California wildfires on a failure to “clean your floors … clean your forests.” However, as the new Environmental Research Letters study concluded, “demographic and forest management factors alone are insufficient to explain the magnitude of the observed increase in wildfire extent over the past half-century.” Climate change is playing the largest role in worsening California wildfires, and the study authors described it as “a wildfire ‘threat multiplier’ amplifying natural and human risk factors that are already prevalent throughout California.”

As UCLA climate scientist Daniel Swain and colleagues found in a 2018 study, climate change is shifting precipitation patterns in California, leading to more rain in the winter but less in the autumn and spring seasons, bookending the state’s already dry summer months and lengthening the annual wildfire season. Wildfire threats associated with normal weather variations, like California’s already low 2020 precipitation at just 62% of average, are amplified by the rising temperatures and decreasing autumn rainfall caused by climate change.

Scientists can’t yet say whether climate change played a role in the rare lightning storms that ignited the August 2020 fires, but it certainly exacerbated the hot and dry conditions that allowed the wildfires to spread farther and faster.

Wildfires, COVID and our health

The wildfire smoke has spread across much of the state, often deteriorating air quality to levels deemed “unhealthy” or “hazardous.” Climate scientist Drew Shindell has incorporated air pollution data into climate models and recently presented his findings in testimony to Congress. He concluded that the adverse impacts of air pollution and heat are much worse than previously thought, “roughly double those that would have been obtained using older evidence,” while air pollution “damages lungs, hearts, brains, skin and other organs … affecting virtually all systems in the human body.”

The 2020 wildfires of course overlap the ongoing COVID-19 pandemic, which likewise damages lungs and also hearts, brains, and other organs. The virus has spread particularly rapidly through several prisons, many of whose inmates California uses to fight wildfires for $2 to $5 per day plus $1 per hour when out fighting fires. As a result, only 90 of the state prisons’ 192 inmate fire teams are available to assist with the wildfires this summer. Prison inmates normally account for 23% of California’s wildfire fighters. Thus the pandemic is putting a strain on the state’s fire-fighting resources, which are already thinly spread in light of the sheer number and size of the August 2020 wildfires across the state.

California in August 2020s is experiencing its version of a “perfect storm”: A heat wave caused by a high-pressure dome, which also triggered rare lightning storms, igniting hundreds of wildfires across the state during a relatively dry year with an ongoing pandemic. High electricity demand during the record heatwave also combined with poor planning by electric grid operators, resulting in isolated rolling blackouts over two days.

Some parties have exploited this unfortunate situation to blame renewable energy for the blackouts, but in reality, a number of factors played a role, including reduced production from fossil fuel gas plants that struggled to operate in the heat.

In the end, experts agree that the only way to lessen the threat-multiplying effects of climate change is to slow global warming by transitioning away from fossil fuels as quickly as possible, while building a smarter and greener power grid that can handle the added stresses brought on by the kinds of extreme climate change-amplified weather California is suffering through.