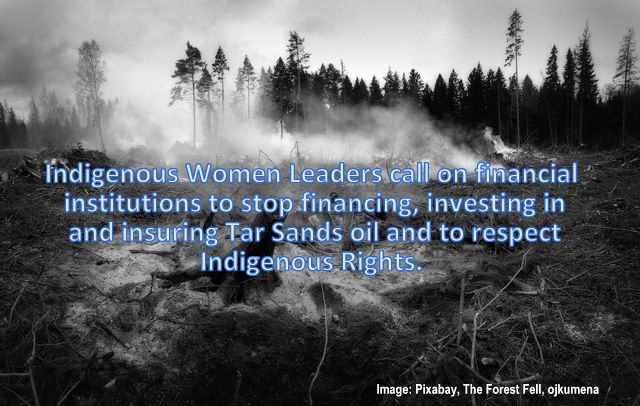 To the CEOs of major global asset managers, banks, and insurers:

We, the undersigned group of Indigenous women and organizations, call on your institutions to stop financing, investing in, and insuring the expansion of tar sands oil extraction, transport, and refining, and commit to phasing out support for tar sands oil. These measures should encompass both projects and the companies that build and operate such projects.

The tar sands sector poses grave threats to Indigenous rights, cultural survival, local waterways and environments, the global climate, and public health. Furthermore, this year saw a significant set of losses in the oil and petroleum sector, and no subsector has had a worse financial prognosis than tar sands oil.

The destructiveness of tar sands has been well-documented, and the sector’s growth has been inhibited by legal challenges, financial uncertainty, and grassroots resistance. Though governments and corporations are still calling for the expansion of the tar sands, current tar sands production is restricted by a pipeline bottleneck, which means that the future of increased tar sands extraction depends on three pipelines.

With fossil fuel corporations plowing ahead with pipeline construction in the midst of a global pandemic and massive financial meltdown, we urge your institutions to immediately decline any support for TC Energy’s Keystone XL pipeline, Enbridge’s Line 3 pipeline, and the Canadian government’s Trans Mountain pipeline – and to cut ties with these tar sands projects and companies.

At this moment, tar sands extraction and construction poses major risks to the health of communities and workers due to COVID-19 transmission. There have been reported outbreaks of the virus at tar sands project sites in Alberta.1 Meanwhile, construction has recently started or is continuing on the Keystone XL pipeline in Montana, the Line 3 pipeline in Minnesota and the Trans Mountain pipeline in British Columbia. Tribal leaders, local lawmakers, and residents have warned that a mass influx of workers from outside their region could spread COVID-19 in rural areas that lack adequate medical infrastructure to handle a surge in virus cases.

Indigenous peoples across the U.S. are already experiencing the devastating impact of the COVID-19 pandemic. These communities are uniquely vulnerable to the virus’s spread due to historically underfunded healthcare programs and significant health disparities.2 Moving forward with pipeline construction will only  exacerbate the issues Indigenous communities already endure.

Indigenous women in these rural areas are in peril. There is growing evidence that the epidemic of missing and murdered indigenous women (MMIW) is directly linked to fossil fuel production.3 Workers relocate to construction sites to build pipelines, creating temporary housing communities known as “man camps” near the pipeline route, which is oftentimes on or next to tribal nation lands. Studies4, reports5and Congressional hearings6 have found that man camps lead to increased rates of sexual violence and sexual trafficking.

The Treaty Alliance Against Tar Sands Expansion, comprised of more than 120 First Nations and Tribes, stands in committed opposition to all tar sands pipelines crossing their traditional lands and waters and has called for an international campaign to divest from any financial institution that funds them.

In recent years, Indigenous-led movements have forced the cancellation of the Frontier mine, sponsored by Teck Resources, and the Energy East pipeline, sponsored by TransCanada (now TC Energy). Our movements have also delayed projects for years. TC Energy’s Keystone XL pipeline extension was proposed in 2008 and has faced innumerable setbacks. This July, the courts voided a permit for the Dakota Access Pipeline (DAPL), which may require it to shut down permanently. We will continue to resist the remaining proposed projects and hold the financial backers of these companies accountable.

At a global scale, potential emissions from the coal, oil, and gas reserves already in production would take the world well beyond 2°C of warming, let alone 1.5°C.7 This means financing, insuring, and investing in any new or expanded tar sands extraction or transport infrastructure is incompatible with the goals of the Paris Agreement. Given the climate imperative to limit fossil fuel expansion, how we recover from the COVID-19 induced economic crisis will be make or break for maintaining warming to 1.5ºC. This is a critical year to invest in communities, not extractive industries.

At the point of extraction, tar sands destroy large swathes of boreal forest and require massive quantities of chemicals, water, and energy. The carcinogenic and toxic pollutants released in the process have done irreparable and widespread harm to the health of First Nations communities in northern Alberta, their watersheds, lifeways, and their local ecosystems.

Tar sands extraction is occurring on Dene, Cree and Metis traditional territories throughout Treaty 8 and Treaty 6 lands, including Athabasca Chipewyan First Nation (ACFN) traditional lands. The ACFN have been at the forefront of challenging existing and proposed tar sands projects in Alberta, in particular in the Athabasca area where the bulk of extraction takes place. In-situ and steam-assisted gravity drainage expansion plans are also being developed in the Peace and Cold Lake areas — facing vocal opposition from the Lubicon  Cree and the Beaver Lake First Nations, respectively.

Transporting tar sands out of Alberta, whether via train, tanker, or pipeline, is a dangerous and polluting process. As of 2017, four pipeline companies alone had spilled 63,000 barrels of hazardous liquids – including crude oil – from their existing U.S. pipeline network since 2010.8

The Keystone XL pipeline would connect tar sands reserves in Alberta, Canada with Gulf Coast refineries, carrying 800,000 barrels per day across the United States. Originally proposed more than ten years ago, the long-delayed pipeline is a project of TC Energy (formerly TransCanada). At the end of March 2020, TC Energy announced its decision to move forward with construction of the project in the United States — despite active legal challenges, a lack of required permits, and without the Free, Prior and Informed Consent of Indigenous communities along the proposed route.9

On April 15, the U.S. Federal courts ruled that Army Corp of Engineers Nationwide Permit 12 was faulty and did not take into consideration the Clean Water Act or the Endangered Species Act. This decision was upheld by the Supreme Court in July, halting river crossings for the Keystone XL pipeline and casting further doubt on the pipeline’s viability.10

Line 3 is an existing Enbridge pipeline that ships crude oil from Alberta to Superior, Wisconsin, crossing the Leech Lake and Fond du Lac reservations, the Mississippi River headwaters, and the 1855, 1854, and 1842 treaty areas. This pipeline has had numerous ruptures and spills since it was built in 1961 and is currently operating at half pressure due to severe corrosion. Instead of safely decommissioning this pipeline, Enbridge wants to abandon it in the ground and build an entirely new $7.5 billion pipeline. Though the company refers to it as just a replacement project, it is no minor replacement of an existing pipeline – it is the largest project proposed in Enbridge’s history, carrying up to 915,000 barrels of bitumen sludge per day from the tar sands.12

Line 3 seeks to cut a new energy corridor through lakes, untouched wetlands, treaty-protected wild rice beds, and the heart of Ojibwe territory, irreparably harming sensitive ecosystems through construction and creating  immense risk of tar sands spills into these sacred and protected areas. New oil pipelines in northern Minnesota violate the treaty rights of the Anishinaabeg by endangering critical natural and cultural resources in the 1842, 1854, and 1855 treaty areas.

First Nations that would be directly impacted by the route and port terminal are fighting the project in the courts and leading protests on the ground. The Tsleil-Waututh, Squamish, and Coldwater Indian Band, are among the First Nations and Tribes currently in litigation against the project. The Coast Salish, Musqueam,  Sto:lo, Nlaka’pamux, and Secwepemc Nations, whose territories cover more than half the length of the  pipeline, have also filed legal challenges to the project.

These projects are pushing ahead, despite mounting evidence that the tar sands sector is not economically viable. The current economic crisis has sent oil and gas prices, and particularly tar sands oil, plunging.13 Tar sands is one of the most carbon-intensive, expensive extraction processes in the industry, and these pipelines are likely to be stranded assets soon after they are built.

The industry itself is recognizing this economic reality. In February 2020, Teck Resources withdrew its application for the Frontier tar sands project – slated to be the largest ever open pit tar sands mine – from a regulatory review process. In a letter to the Canadian Minister of Environment and Climate Change, Teck cited the fact that “global capital markets are changing rapidly.” This project’s cancellation marked a victory for Indigenous rights and sovereignty, and it served as a powerful signal that fossil fuels are not the future of our economy.14

Given the growing evidence of the materiality of Environmental, Social and Governance (ESG) factors for credit risk, creditors should be building in stronger ESG due diligence into their credit assessment systems. A recent study found that investors proximate to Indigenous land claims experience 60% to 160% increases in  material credit events such as lawsuits, regulatory inquiries, and actions as well as labor-related actions.15

Yet creditors don’t seem to take the higher incidence of these events into account in assessing and pricing risk nor in structuring the terms of covenants. When risk is shown to be material, creditors are required to report on that risk to investors so that both company and investor can assess and monitor that risk. That is not happening for tar sands projects, yet the poor social performance along with market consequences of inadequate disclosure are real. There is growing evidence that the aggregate impact of social risk is becoming material:

We need a just transition to renewable, sustainable energy, not expansion of fossil fuel extraction. We demand respect for our rights and sovereignty as Indigenous Peoples so that we can control our own lands, futures, and job opportunities.

Rather than exploit the tar sands sector for its last drops of profit in the face of climate crisis and disregard the health and safety of communities along pipeline routes, your company can accelerate a just transition for Indigenous nations, communities, and workers that depend on the industry for their livelihoods by publicly ruling out involvement in these tar sands projects and redirecting your insurance underwriting to communities and renewable, clean energy.

In order to future-proof against involvement in these controversial, climate-wrecking pipelines, as well as the massively destructive extraction projects that feed them, we urge you to end your support of tar sands expansion and commit to phase out of this inviable sector, while ensuring a just transition for tar sands impacted communities. We call on you to adopt a requirement to obtain and document the Free, Prior and Informed Consent of impacted communities, especially Indigenous communities, for the projects of all clients and to cease supporting clients that fail to comply with this requirement. We further call on you to end accountability practices that rely upon client-based reporting, as large-scale resistance and countless lawsuits have indicated these clients are unwilling to be honest and transparent. These are crucial steps to align your institutions with Indigenous rights and a stable climate.

We request an immediate response as to how your institutions are addressing these urgent issues, and the undersigned Indigenous women impacted by these projects welcome the opportunity to discuss them in a  phone call or an online meeting with representatives from your institutions.