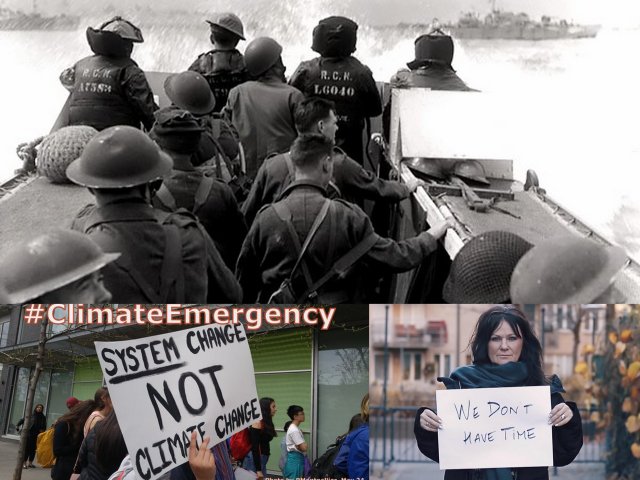 There has been a flurry of announcements by governments now faced with the realization that their Paris Agreement targets need more ambition if we are to bend the curve on the relentless rise of greenhouse gas emissions. But we will need than just words and flashy news releases. Seth Klein, author of A Good War, notes that in Canada “the federal and provincial governments still don’t treat climate change as an emergency. They need to show leadership and draw lessons from history.” His recent piece posted in Policy Options is featured below. (Editor intro)

The War on Climate

Even before the arrival of COVID-19, the history of the Second World War was making a remarkable comeback. Our movie theatres (remember those?), Netflix streams and bookstore shelves were full of stories about Canada’s experience in those trying times. Then, once the pandemic struck, our governments drew upon those wartime lessons as they responded to the health emergency.

I spent the last year writing a book about Canada’s experience in the Second World War, searching for lessons on how to confront another equally dire emergency – the climate crisis – and how we can quickly transition off fossil fuels (A Good War: Mobilizing Canada for the Climate Emergency, ECW Press). Since releasing the book in September, I have frequently been asked in interviews, “How do you know when a government gets the emergency?”

Here are my four markers for when you know that a government has shifted into emergency mode:

During the Second World War, the Canadian government did all those things. Likewise, in response to the pandemic, the Trudeau government has passed all four markers. But with respect to the climate emergency – thus far at least – our current federal and provincial governments are failing on all four counts.

Let us explore each indicator in turn:

Spend what it takes to win

The benefit of an emergency mindset is that it forces governments out of any previous austerity thinking. Federal government expenditures during the Second World War were unlike anything before or since that time. That resulted in a doubling of GDP and the debt-to-GDP ratio had reached what remains an historic high of 108 per cent by war’s end. When C.D. Howe, the then-minister of munitions and supply, was pressed about government spending, he famously replied, “If we lose the war, nothing will matter… if we win the war, the cost will still have been of no consequence and will have been forgotten.”

As a result of increased spending on pandemic relief measures, the Parliamentary Budget Officer estimates that the federal government will run a deficit of about $328.5 billion, and the debt-to-GDP ratio will end the 2020-21 fiscal year at 47.9 per cent. Remarkably, almost all this new debt is being taken on by the Bank of Canada, which for the first eight months of the pandemic was buying $5 billion in federal government securities per week (recently reduced to $4 billion a week) – a stunning role that we have not seen the bank play for many decades.

However, federal spending on climate action and green infrastructure pales in comparison. In October, the government announced new climate-infrastructure spending amounting to a meager $2 billion per year – to be cumbersomely administered through the Canada Infrastructure Bank, rather than be nimbly financed through the Bank of Canada. Compare this to the climate plan of U.S. president-elect Joe Biden, who proposes spending US$2 trillion over four years on climate action, or US$500 US billion a year, which divided by 10 (to make it equivalent to the Canadian economy) amounts to US$50 billion a year, or about $65 billion Cdn. Similarly, former World Bank chief economist Nicholas Stern, author of the Stern Review on the Economics of Climate Change, has said governments should be spending two per cent of their GDP on climate-mitigation efforts, which in Canadian terms would be about $50 billion per year.

That means the Trudeau government isn’t merely spending a little less than it should in the face of the climate emergency. It is spending less by a massive order of magnitude.

Create new economic institutions to get the job done

During the Second World War, starting from a military production base of virtually nothing, the Canadian economy and its labour force pumped out planes, military vehicles, ships and armaments at a speed and scale that is still simply jaw-dropping. Remarkably, the Canadian government (under the leadership of C.D. Howe) established 28 Crown corporations to meet the requirements of the war effort. Other new institutions included the Wartime Prices and Trade Board, the Wartime Industries Control Board and the Wartime Information Board – just a few examples of what the government was prepared to do to transform the Canadian economy and to expedite wartime production.

Similarly, during the pandemic, we have witnessed the federal government creating audacious new economic programs, like the Canada Emergency Response Benefit and the Canadian Emergency Wage Subsidy, with a speed that few would have predicted.

But in response to the climate emergency, we have seen nothing of this sort. In contrast to C.D. Howe’s wartime creations, the Trudeau government has established two new Crown corporations during its time in office – the Canada Infrastructure Bank (which has thus far accomplished very little), and the Trans Mountain Corporation (an ill-advised decision that makes all Canadians the owners of a 60-year-old oil pipeline).

If our government really saw the climate emergency as an emergency, it would quickly conduct an inventory of our conversion needs to determine how many heat pumps, solar arrays, wind farms, electric buses, etc. we will need to electrify virtually everything and end our reliance on fossil fuels. Then, it would establish a new generation of Crown corporations to ensure those items are manufactured and deployed at the requisite scale. It should also create an audacious new federal transfer program – I recommend a $20-40 billion annual Climate Emergency Just Transition transfer program – to catapult climate infrastructure spending and worker retraining in every province.

Listen to The Current with Seth Klein: ‘New climate denialism’ is stopping Canada from approaching crisis with WWII-level effort.

Shift from voluntary and incentive-based policies to mandatory measures

­The Second World War saw rationing of core goods and all manner of other edicts under the War Measures Act. The pandemic has seen our governments issue health orders and take strong actions to shut down non-essential parts of the economy when needed. But for the climate emergency, we have seen virtually nothing of the sort.

For the last 20 years, Canada’s greenhouse gas emissions have flatlined, but they are not going down. We have run out the clock with distracting debates about incremental changes. But where it matters most — actual GHG emissions — we have accomplished precious little. Why? A major reason is that actions taken to date have been almost entirely voluntary. We encourage change. We incentivize change. We offer rebates. We send price signals. But what we have decidedly not done is require change.

If we are going to meet the GHG targets set out by the Intergovernmental Panel on Climate Change (the United Nations body for assessing the science related to climate change), we need to set clear, near-term dates by which certain things will be required. For example, we should declare that it will no longer be legal to sell new fossil fuel-burning vehicles as of 2025. We should mandate that all new buildings will not be permitted to use natural gas or other fossil fuels for heating as of next year. We should ban advertising by fossil-fuel vehicle-makers and gas stations. That’s how we make clear that this is serious.

Tell the truth about the severity of the crisis

In frequency and tone, in words and in action, emergencies need to look and sound and feel like emergencies. The leaders we remember best from the Second World War, such as Winston Churchill or Franklin Delano Roosevelt, were outstanding communicators and orators who walked a careful line. They were forthright about the gravity of the crisis, yet still managed to impart hope. Their messages were amplified by a news media that knew what side of history it  wanted to be on, and by an arts and entertainment sector keen to rally the public.

Similarly, that’s how our present governments have modelled emergency communication throughout the pandemic. The messages are ubiquitous. We receive daily press briefings. We hear regularly from public health officials. The media has taken seriously its duty to provide the necessary information on a daily basis. Government leaders and the media have listened to science and health experts, and have acted accordingly.

None of this consistency and coherence, however, is present with respect to the climate emergency. When our governments do not act as if the situation is an emergency – or when they send contradictory messages by approving new fossil-fuel infrastructure – they are effectively communicating to the public that it is not an emergency. Where are the regular media briefings on how the climate emergency response is going? Where is the government advertising to boost the level of public “climate literacy” and to explain their policies? Where are the daily media climate emergency reports, telling us how this fight for our lives is unfolding at home and abroad? Most importantly, where are the federal or provincial political leaders who should be forthrightly telling the truth – that the health and stability of all of us, of our economy, of our planet requires that the fossil-fuel industry be wound down in a carefully managed way over the next two decades? We need these kinds of leaders, with the courage to tell us the truth, and then lead us through the critical years ahead.

ICYMI:
What We’re Up Against: The New Climate Denialism
Ottawa Net-Zero Legislation Fails To Meet the Scale Of the Climate Threat. Again.