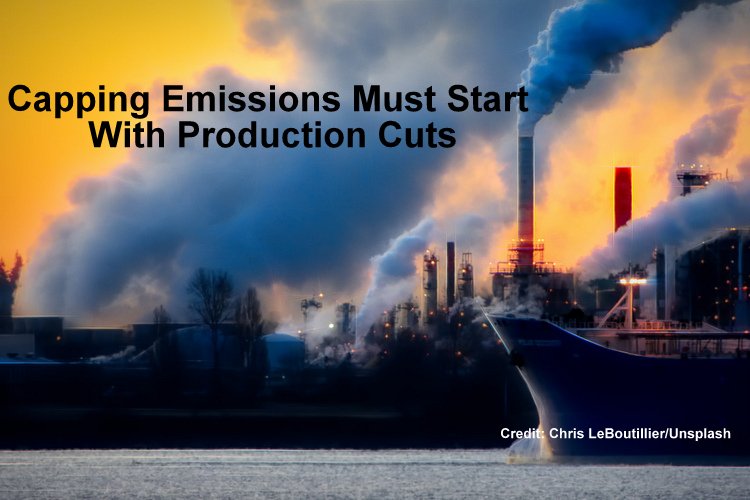 “It’s no secret that Canada has a long way to go if we’re actually going to meet the climate commitments we made in the 2015 Paris Agreement. And given that more than a quarter of Canada’s greenhouse gas emissions come from the extraction and processing of oil and gas, any realistic solution needs to involve production cuts in that sector,” writes Marc Lee in his CCPA Newsletter.

(This post was previously published in CCPA’s Policynote by Senior Economist Marc Lee.)

New federal proposals for an emissions cap on the oil and gas industry have begun a difficult and uncomfortable conversation, but one that finally gets to the heart of climate and energy policy in Canada. This post looks at the new proposals and how we got here: the evolution of Canadian climate policy since the 2015 Paris Agreement.

More than a quarter of Canada’s total greenhouse gas (GHG) emissions come from the extraction and processing of oil and gas, so any serious plan to reduce overall GHG emissions must achieve real reductions from this sector.

By planning to reduce domestic GHG emissions while leaving the door open for increases in oil and gas production for export, the federal government has been exploiting a loophole in the Paris Agreement—that only the GHG emissions from extraction and processing are counted in our national inventory, not the much-larger emissions when exported fossil fuels are combusted in the United States or Asia.

Reducing production per barrel is not the answer

The good news is that since Paris, oil and gas industry emissions have stopped growing. While total oil production surged more than 20% between 2015 and 2019, the industry has been reducing emissions per barrel produced, keeping emissions flat. Gas production is also up, though more modestly.

The federal government has been exploiting a loophole in the Paris Agreement.

To actually reduce emissions going forward, the only way oil and gas extraction can continue to grow is through a mix of further (massive) improvements in the emissions intensity of production, and carbon capture and storage. More likely, purchases of domestic carbon offsets/credits or their international equivalents will be used as an escape hatch.

Enter the federal government’s July 2022 discussion paper, which articulates two possible pathways: a cap-and-trade system for the oil and gas sector; or an additional industry-specific carbon tax. These two broad approaches to reducing emissions have been long debated by energy economists, with caps providing greater certainty on total emissions whereas a carbon tax gives certainty on the price.

Carbon pricing won the federal policy contest with the government imposing a minimum carbon price across the country while allowing provincial systems that are equivalent in stringency. The oil and gas industry, however, managed to dodge full federal carbon pricing and instead pays a lower carbon price through the Output Based Pricing System (OBPS) for large emitters.

In the name of “competitiveness” the OBPS exempts a base amount of emissions, with the carbon price applying only above that level. As a result, oil and gas companies pay a much lower average carbon tax rate than households filling up their gas tanks. According to the Canadian Institute for Climate Choices, this effective carbon tax rate for large emitters was just under $5 per tonne of CO2 in 2020, compared to the minimum federal carbon price of $30 that year (as of April 1).

BC’s oil and gas industry is pushing to shift from the more-stringent provincial carbon pricing system to the federal OBPS to lower their costs.

Even better for industry, the federal government is launching a GHG Offset System that will allow large industrial polluters under the OBPS to pay into offset projects in lieu of reducing emissions.

So what does this mean for the emissions cap? Recent public criticism from the oil and gas industry shows the federal government is on the right track with its emissions cap proposals, but in climate policy the devil is in the details.

In climate policy the devil is in the details

A cap-and-trade system is better in theory but how emission permits are allocated matters. If permits are auctioned then revenues can be used to mitigate some of the challenges facing consumers or industry. However, if permits are given away based on historical performance or share of output, there will be much less incentive for action by industry.

The possibility of relying on offsets and international credits to meet some of the emissions reduction target is also problematic. Offset projects have a terrible track record and have been notoriously beset by fraudulent activity so they may not lead to bona fide emission reductions elsewhere.

Alternatively, a carbon tax pathway would require continual adjustments to the industry-specific carbon price to achieve the emissions cap. In practice, pricing would be based on modeling potential impacts and is more likely to underperform in achieving emission reductions.

Ultimately, we need all levels of government to be taking serious action to prevent catastrophic climate change, including a phase-out plan for the oil and gas industry. We can’t afford to wait any longer. — Marc Lee

Missing in this discussion is the need to limit fossil fuel production as we move to net zero emissions by 2050. Because of underlying regional politics, no one wants to talk about production cuts, but we urgently need to figure out a managed decline of the industry and a fair transition for workers and communities.

The danger is that this discussion and consultation process becomes yet another source of delay that puts off cutting production and emissions now for planned reductions in the future based on policies still at the conceptual stage. Industry has ample time to ramp up its lobbying in order to water down policy and delay its implementation. At best, it will be 2025 before we see an emissions cap implemented.

The recent surge in global oil and gas prices has resulted in record profits for oil and gas companies. Now it’s time for that party to end as we strategically wind down this industry. With the world literally on fire in recent years, the urgency of this conversation is greater than ever.