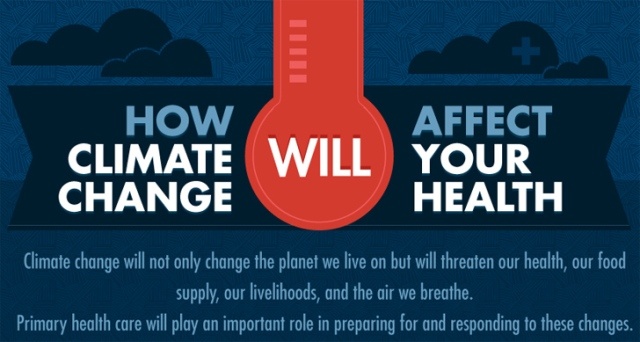 In 2008, poor air quality alone, including from oil and gas production, cost Canada about $8-billion, according to a report by the Canadian Medical Association. By 2031, those costs are expected to rise to $250-billion….almost 90,000 people will have died from the acute effects of air pollution,” the CMA said. (Source: The Globe and Mail).

The 2014 US National Climate Assessment outlined the human health implications of a warming planet. Our changing climate will produce severe health impacts which “will manifest in varying ways in different parts of the world,” states the report.

Climate change threatens human health and well-being in many ways, including impact from extreme weather events, wildfires, decreased air quality, threats to mental health and illnesses transmitted by food, water, and disease-carriers such as mosquitoes and ticks.

The threat to human health from climate change is so great that it could undermine the last 50 years of gains in development and global health, experts warned in the Lancet in June 2015.

Previously, Canadian Health associations sounded the alarm about the health impacts of climate change. In June 2014, Dr. Eilish Cleary, Chief Medical Officer of Health for New Brunswick, expressed the necessity of considering human health when making decisions about emissions.  She said, “There hasn’t been adequate recognition by all levels of policy-makers and decision-makers that it is really a problem that we have to do something about.”  Nova Scotia’s Chief Public Health Officer Dr. Robert Strang concurred, adding that the discourse has been too focused on adaptation to the exclusion of mitigation planning.