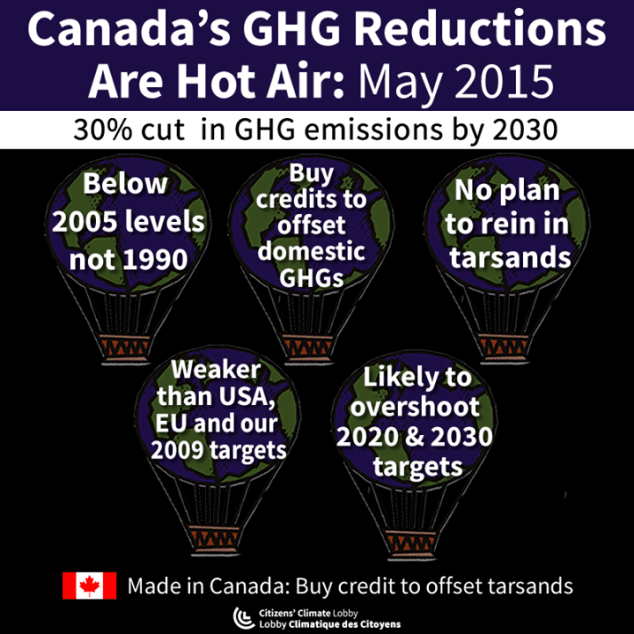 It’s another black eye for Canada’s reputation in the global climate action community. Canada’s post 2020 emissions targets are another disappointing sign in our global effort to reduce greenhouse gases. We will continue to be a climate laggard in this crucial Road to Paris2015 year. Prime Minister Harper has clearly opted out of the climate action process prefering to leave that daunting task to future generations.

Canada’s recent announcement of post-2020 emissions targets are labelled as hot air by Citizens’ Climate Lobby Canada. Canada’s INDC (Intended Nationally Determined Contribution) submission to UNFCCC (United Nations Framework Convention on Climate Change) calls for an economy-wide target to reduce our greenhouse gas emissions by 30% below 2005 levels by 2030. This plan is less ambitious than the 2009 pledge made in Copenhagen. It also leaves out the Tar Sands, Canada’s fasting growing source of emissions. Clearly Stephen Harper has no intention of following his long-standing promise to work in lock-step with the Americans on climate change policies.

The following assessments by the Carbon Action Tracker illustrate just how lame a target this is.

2013 – With current policies in place, Canada is not on track to meet their pledge. Even taking into consideration the potentially considerable credits from LULUCF (Land Use, Land Use Change, Forestry) the pledge would not be met.

2014 – While emissions need to decline by 13% from 2012 levels to achieve the pledge, under current policy projections Canada’s emissions are projected to increase by 9% in this period. Additional measures are needed to achieve the required remaining reductions of 151 MtCO2e by 2020.

Caroll Linnitt of Desmog Canada outlines Canada’s late and inadequate climate target in her May 20th blog published below with her permission.

Months after most countries revealed national climate targets in the lead up to the December 2015 UN climate summit, Canada has finally announced its contribution to global emissions reductions — and its commitment is getting a failing grade from the climate community.

“In rating Canada ‘inadequate,’ our lowest rating, we note that other governments will have to take a lot more action to make up for the hole left by Canada’s lack of ambition — if warming is to be held to 2˚C,” said Niklas Höhne of the institute.

Canada is promising to reduce its greenhouse gas emissions by 30 per cent from 2005 levels by 2030.

According to Climate Action International, Canada is unlikely to meet that target, even though it is much weaker than commitments made by other industrial nations.

Beyond that, Canada is relying on some fancy ‘climate credit’ footwork to avoid limiting emissions from its fastest growing source of carbon pollution: the Alberta oilsands.

Climate Action International said Canada is planning on using forestry credits “to avoid reducing emissions from other sources such as fossil fuels.” Because Canada is home to 10 per cent of the world’s forests, that could translate into credits for an estimated 63 megatonnes of carbon dioxide equivalent, or about as much carbon emissions as the entire country of Sweden produced in 2011.

If you exclude forestry credits from Canada’s climate profile, emissions are actually projected to surpass 2005 levels — by one per cent in 2020 and by eight per cent in 2030.

Emissions from the oilsands, Canada’s fastest growing source of greenhouse gas emissions have increased 79 per cent since 2005. They currently account for nine per cent of Canada’s total emissions and that portion is expected to jump to 14 per cent by 2020.

Louise Jeffery from the Potsdam Institute for Climate Impact Research said Canada is relying heavily on its forests while skirting its responsibility to curtail emissions from the oilsands.

“The accounting options Canada proposes using are fraught with difficulties,” he said, “not least because Canada is no longer a party to the Kyoto Protocol, so it can use much looser rules.”

Canada used its withdrawal from the Kyoto Protocol in 2012 to weaken its climate targets.

Climate Action International argues Canada’s accounting approach is “fraught with difficulties, including substantial potential for double counting [and] asymmetric accounting” because it doesn’t adhere to the same standards as other polluters still signed on to the Kyoto Protocol.

“It’s clear Canada is not serious about climate action,” he said. “Without any new policies in place, its emissions are expected to balloon through to 2030, with the tar sands taking up a significant proportion.”

Others have pointed out that Canada, on top of not doing its fair share, is also missing out on the opportunity to transition to cleaner sources of energy.

With this inadequate target, Canada will not tap into its large potential to reduce fossil fuel consumption,” said Kornelis Blok, of Ecofys. “Canada risks becoming a laggard in clean innovation, such as energy efficiency.”

A report released by Clean Energy Canada in late 2014 showed the alternative and low-carbon energy sector is making significant gains in the Canadian economy and jobs market, but isn’t getting the support from the federal government it needs.