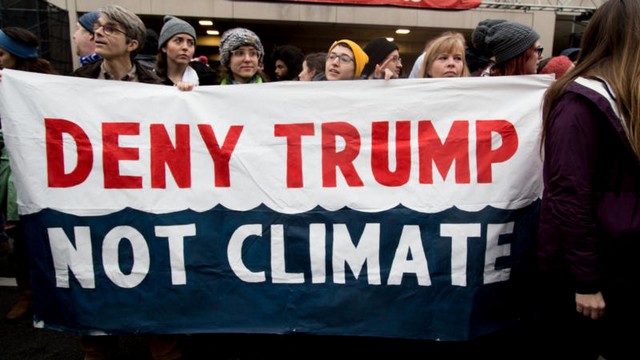 Unlike most people, I don’t view President Trump’s withdrawal from the Paris Agreement as a deeply negative event. Trump’s decision has raised the level of awareness about climate change to new heights. There’s been more media coverage and more interest in the Paris Agreement during the last week than there has been since its ratification in December of 2015. So thank you Mr. Trump and frankly, good riddance. The climate revolution does not need you.

Real world leaders have reaffirmed their support of the climate accord and the urgency of taking climate action. And some have gone as far as to say that emissions-reduction targets need to be ratcheted upward to make up for the US going dormant on the climate front.

A Climate Reality colleague, Harriet Shugarman, views President Trump’s decision in a similar light. “I see the US withdrawal from the Paris Agreement as a positive…. Let’s move on,” says Harriet. I’m pleased to feature her recent post first published on ClimateMama. (Rolly Montpellier, Co-founder and Editor of Below2°C) 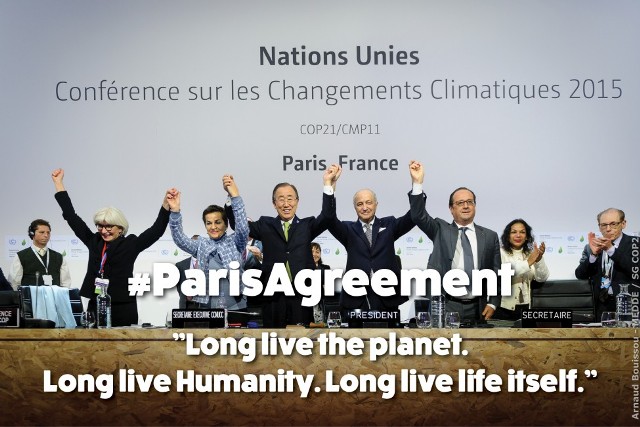 Contrary to many voices you [are hearing], I see the US withdrawal from the Paris Agreement as a positive. Let’s move on – let’s stop pretending the US federal government can actually implement strong climate policy at home. It hasn’t done this for many, many years, not Obama nor Bush before him. Nor have we effectively or substantially contributed in the past to international climate policies and accords; we were never signatories to the Kyoto Protocol, the precursor to Paris, and we put a “pin” in the Copenhagen Agreement that was poised to  put the world on a positive trajectory for immediate and effective climate action.

I spent 13 years working at the United Nations and I know the importance of an international agreement and the strength of a country’s signature on that agreement. For states, cities, civil society and companies on the ground, a signed agreement gives everyone in that country a reference point to demand that the national government live up to its commitments. We KNOW this administration will NEVER live up to our Paris commitments. In fact Trump and company are already unraveling and  tearing down President Obama’s climate policies and his clean power plan.

Other countries can see clearly our “Emperor” is wearing no clothes. So, when it comes to being prepared to address climate change, I say GOOD RIDDANCE. I only see negatives of having the Trump administration at the table for international agreements on climate. His administration would weaken and slow down other government’s commitments. Having Rex Tillerson, Secretary of State and ex-CEO of Exxon, or Scott Pruitt, EPA Administrator and an avowed climate denier, sit at the international climate negotiating table on behalf of the US people is clearly NOT a good idea.

The Trump administration has made it clear from its first days in office that it is set on weakening climate policy and/or instituting the lowest common denominator solutions. Its first official act in office was to “re-approve” the Keystone XL pipeline. Our children are watching, with their future now in our hands. We need an “all hands on deck” approach. This will not come from the Trump Administration –  let’s not fool ourselves.

China, India and the EU Stepping Up

It’s time for China, India and the EU to lead on climate. In fact they already are. If we want to see the US resume its position as a world leader – on climate, on refugees, on health, on security – then let’s vote in leaders who will lead, not leave. In the meantime, lets champion our states, cities and businesses that are taking climate action now. Let them represent America.

We are living in unprecedented times. Trump doesn’t represent the American people. He doesn’t have a mandate to undo these agreements, and yet he is acting as if he does and no one is stopping him. Trump’s actions show him for what he is – NOT  a world statesman, NOT someone with our long term interests at heart and NOT someone who will help America rise. He has CHOSEN to remove HIS administration from the international stage. Fortunately for all of us, HE won’t be visible as the world moves forward with climate solutions.

The Paris Agreement was an important agreement for one main reason – 195 countries came together and agreed that the “[email protected])&t had hit the fan”, that climate change is real, here and now, and that we were causing our climate to change. When it came to “solutions”, each country brought to Paris its own INDC (Intended National Determined Contribution or “Country Plan”) which, even if every country completed to the letter of the plan, would still not put us on a safe trajectory for dealing with climate change. So, good-bye President Trump. The Paris Agreement will occupy the news cycle for a few days more, but then you will have to deal with the issues at hand.

We all need to loudly champion what is happening at the state, regional and local levels on climate change solutions, mitigation and adaptation. We don’t have our heads in the sand. As Climate Mamas and Papas we see how our climate is changing – it’s happening in our backyards, on our beaches, our mountains and at our homes. American companies too are on board to tackle climate change; their bottom lines are at stake.

Now more than ever…it’s time to be UNIFIED. We all drink the same #water and breathe same air! #Climate #resist pic.twitter.com/LkK9vg5fQm

So, at least we don’t have to pretend anymore that there is “someone minding the store” on climate and energy policy at 1600 Pennsylvania Avenue in Washington, DC. We know that the administration’s energy policy is about “bringing back coal and doubling down on fossil fuels.” This won’t last long, as companies will not see long term economic gains and the stock market is already pulling away from fossil fuels and towards renewables. That is our future.

Our ClimateMama moto is “Tell the Truth, Actions Speak Louder Than Words, Don’t Be Afraid”. The Truth is, Trump and company will not take action on climate change. Those actions are up to us, and we aren’t afraid to call out what we see and demand a future that is livable, safe and hopeful for our children . Trump is NOT part of that future. The sooner we all agree on this, the better.

Harriet Shugarman is the Founder and Executive Director of ClimateMama. In 2007, Harriet was trained as a Climate Reality Leader in the The Climate Reality Project led by Al Gore. ClimateMama grew out of her work on the climate. She has put together a team of exciting and talented individuals, who contribute to ClimateMama through advice, comments, guest blog posts and best practices. See her more extensive biography. You can also reach her on Facebook and Twitter.