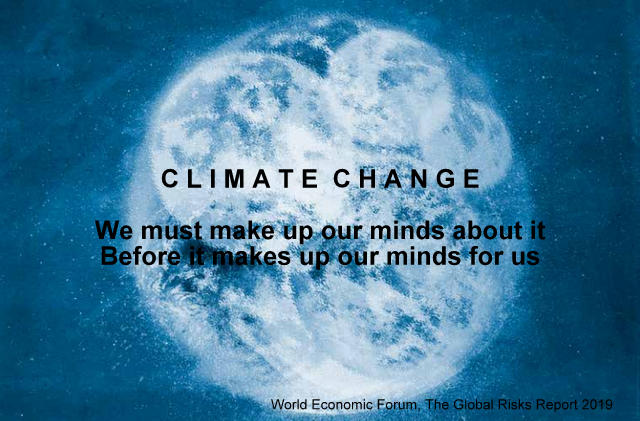 In October of 2018, the IPCC released its landmark report on the impacts of global warming of 1.5 °C above pre-industrial levels. World-leading climate scientists are now warning us that we have 12 years to prevent the catastrophic impacts of climate change. And many believe it’s time to sound the climate alarm bells.

“The [IPCC] report has become a key talking point of political progressives in the US, who, like journalist and activist Naomi Klein, are now speaking of “a terrifying 12 years” left in which to cut fossil fuel emissions,” writes Dahr Jamail in his recent Truthout Op-Ed.

However, the IPCC’s scientific conclusions are not completely sound and fail to tell the true story. Due to a built-in internal political process, meant to get as many countries on board the Paris Agreement as possible, IPCC projections are watered down to the lowest common denominator. “The science is overly conservative, that is, overly optimistic,” writes Jamail. The reality is much gloomier than depicted by the IPCC.

The flow of bad news is endless. Our environment is crumbling before our very eyes. During the day spent writing this piece, dozens of species will have gone extinct. An estimated 150 to 200 species — plants, insects, birds and mammals — are going extinct every day. Countries are not meeting their own targets to protect nature and we are losing biodiversity at an unprecedented rate. Population growth, urbanization, rampant industrialization and climate change are all now threatening the fundamentals of life itself.

The Arctic: The rate of sea ice decline for December is a startling 47,200 square kilometers (18,200 square miles) per year — 3.7 percent per decade relative to the 1981 to 2010 average. A wide expanse of ice about twice the size of Texas has melted away during the last 3 decades.

Greenland: A new study published today in Proceedings of the National Academy of Sciences shows that Greenland is melting 4 times faster than it did just 15 years ago. This has “frightening implications for the pace and extent of future sea level rise,” as reported in EcoWatch. “We’re going to see faster and faster sea level rise for the foreseeable future,” according to Ohio State University geodynamics professor Dr. Michael Bevis. “Once you hit that tipping point, the only question is: How severe does it get?”

Oceans are in serious danger: Oceans contain over 96% of the Earth’s water and cover over 70% of the planet’s surface. The importance of the healthy oceans cannot be overestimated. A recent study reveals that the world’s oceans are warming 40% faster than previously thought. “Our waterworld is in serious danger…things really are as bad as we feared,” writes Eric Holthaus in a Grist article.

An October 2018 study featured in Nature shows three alarming facts: the oceans have absorbed 93 % of all the heat we have added to the atmosphere; planetary warming is much more advanced than previously estimated; and, the sensitivity of earth’s systems to greenhouse gases is much higher than previously thought. “We can’t undo this,” says Harold Wanless from the University of Miami’s Geological Science.

Emissions on the Rise Again

I was born at a CO2 concentration of 310.4 ppm (1947). The current concentration of CO2 now exceeds 410 ppm and continues to rise. The UN’s 2018 Emissions Gap Report shows that the world is so off track that greenhouse gas emissions will need to drop by 55% for the world to achieve the 1.5C aspirational goal of the Paris Agreement. In other words, the goal is pure fantasy.

In fact greenhouse gas emissions are on the rise again, In 2017, global CO2 emissions rose by 1.2% to an all-time high of 53.5 billion tonnes per year. In the U.S. CO2 emissions in 2018 rose by approximately 3.4% after several years of decline.

“At precisely the time in which the world must begin rapidly decarbonizing to avoid runaway climate disaster, the United States is moving further and faster than any other country to expand oil and gas extraction,” reports Oil Change International in its latest analysis. The United States is “gearing up to unleash the largest burst of new carbon emissions in the world between now and 2050,” with an oil and gas expansion equivalent to nearly 1,000 coal-fired power plants.”

The U.S. oil and gas expansion will “impede the rest of the world’s ability to manage a climate-safe, equitable decline of oil and gas production,” claims the report.

Political Will Is Weakening

The political will required to coalesce world leadership into a body laser-focused on shifting the world economy off fossil fuels is simply non-existent. “While it’s technically possible, it’s extremely improbable, absent a real sea change in the way we evaluate risk…We are nowhere near that,” claims Drew Shindell, a Duke University climate scientist and a co-author of the IPCC report.

For the most part, world leaders are only paying lip service to the global climate challenge. World climate leadership is fraught with hypocrisy, misinformation, double standards and political grandstanding. And even the more progressive world leaders fall far short of what is needed to solve the climate crisis.

“Could the world be sleepwalking into a crisis?” asks Aengus Collins, Head of Global Risks of the World Economic Forum. “In a world of shifting power and divergent values, it is likely to become more difficult to make progress on shared global challenges” such as climate change. In its annual risks survey, the environment now dominates the top 10 risks. The failure of climate-change mitigation and adaptation, and extreme weather are the top two risks.

In we were serious about the climate crisis, it should be constantly on our mind. Climate should be on the news every day. It should be discussed on street corners, around the water cooler, at the diner table, in the classroom, on radio talk shows, on nightly news, with your Uber driver… It should be on everybody’s lips. We should be talking about it regularly. But we don’t.

For most of the 7.7 billion inhabitants of the planet, climate change remains a secondary and remote concern relegated to the back of the mind. Daily survival is the driving force.

We will never solve the climate crisis until we treat it as a real crisis, until we start acting as if we are in a crisis.  In the words of Greta Thunberg, “Everyone keeps saying that climate change is an existential threat and the most important issue of all and yet they just carry on like before. I don’t understand that, because if the emissions have to stop, then we must stop the emissions. To me that is black or white.

“There is no grey area when it comes to survival. Either we go on as a civilization or we don’t. We have to change.”

With such a grim prognosis for humanity, I often wonder how I can continue to devote myself to my climate activism. The feeling of loss is heartbreaking. Or maybe it’s because of it that I cannot stop.

Related articles….
The Stakes Could Not Be Higher
A World Where Leaders Are Childish and Children Are Leaders