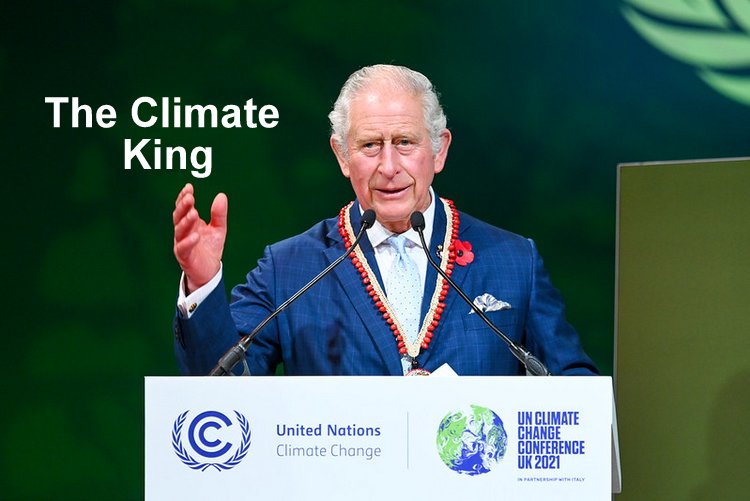 In April of 2022, Prince Charles recorded a passionate message for the 7th Our Ocean Conference. As the Prince of Wales, his commitment to mobilizing world leaders and the public on climate action is well known. As the Climate King, will he choose to expand his sphere of influence?

“What do we do to the ocean and to nature we ultimately do to ourselves. As stewards of this precious planet it is our actions and our actions alone that will determine its future.” — King Charles III

At COP26 in Glasgow in November 2021, Prince Charles called on the world to act on climate change with more vigor and speed—with the scope and urgency that science demands. “The eyes and hopes of the world are upon you to act with all dispatch, and decisively, because time has run out…I can only urge you, as the world’s decision-makers, to find practical ways of overcoming differences so we can all get down to work, together, to rescue this precious planet and save the threatened future of our young people.”

The Climate King’s first climate test will come quickly in his own country. Incoming Prime Minister Liz Truss wants to ramp up North Sea oil and gas projects. She’s already overturned a ban on fracking and appointed an anti-climate action energy minister who says he wants the UK to extract  “every last cubic inch of gas from the North Sea.”

Tradition is not on King Charles’s side. In England, the Monarch does not normally engage in the politics of the country. So how will he square off his passion for the climate, biodiversity, the oceans, conservation and the environment with the new Prime Minister’s stated objective to reverse climate measures started by the previous government? Under Boris Johnson, Britain enshrined into law the goal to cut emissions by 68% by 2030, the world’s most ambitious climate target.

This recent New York Times newsletter, The Crown and the Climate,  looks at the new king’s environmental credentials, what Charles has said and done and the burden of history that weighs on his shoulders.

William – the new Prince of Wales

King Charles’s son William is scheduled to attend some events during this year’s Climate Week NYC 2022. On September 21 he will be speaking at the Earthshot Prize Innovation Summit which showcases the world’s most innovative climate solutions. Could it be that the climate baton will be passed on to William, the new Prince of Wales?

“The cost of inaction is far greater than the cost of prevention.”