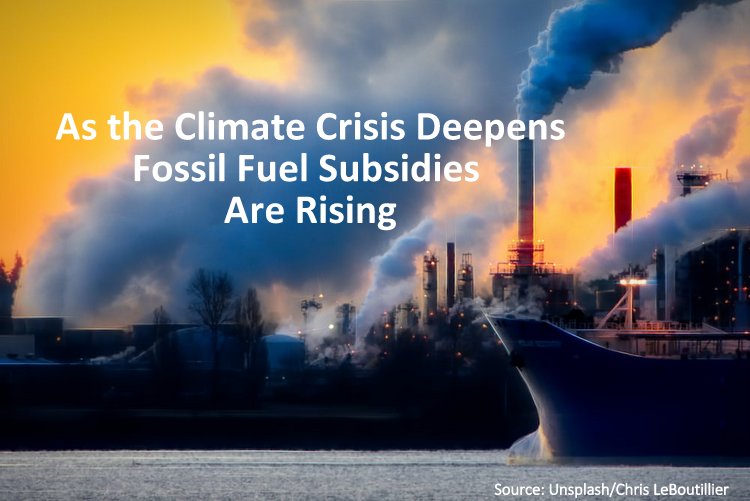 Another sure sign that we are losing the war on climate is the unthinkable near-doubling of fossil fuel subsidies in 2021 at the same time greenhouse gases, sea levels and ocean heat all hit new highs. “The fossil fuel-driven climate emergency is worsening in the absence of meaningful efforts to fundamentally reorganize he world’s political economy,” reports Common Dreams.

(This article was previously posted (under creative commons licence) in Common Dreams.)

An analysis published this week found that government subsidies bolstering the production and consumption of coal, oil, and gas nearly doubled in 2021, even as climate scientists warned that fossil fuel development must be rapidly cut off if the international community is to have any hope of stopping runaway planetary warming.

Data compiled by the Organization for Economic Cooperation and Development (OECD) and the International Energy Agency (IEA) shows that 51 governments around the world—including the United States, Germany, Canada, China, Russia, and Saudi Arabia—provided a combined $697.2 billion in tax breaks and other handouts to the fossil fuel industry last year, up from $362.4 billion in 2020.

The OECD and IEA said that fossil fuel subsidies, which have continued despite nations’ vows to start reining them in amid climbing carbon emissions and devastating extreme weather, are undercutting global efforts to fight the climate crisis.

Roadblock to a clean future

“Fossil fuel subsidies are a roadblock to a more sustainable future,” said IEA executive director Fatih Birol, who noted that the doubling of fossil fuel subsidies last year was at least in part attributable to government attempts to blunt the impact of soaring energy costs on consumers.

As The Guardian pointed out Wednesday, that approach “largely benefits wealthier households, as they use the most energy, rather than targeting those on low incomes.”

Research has shown that the richest 10% of the global population consumes around 20 times as much energy as the poorest 10%.

Oil companies, meanwhile, are raking in huge profits as they exploit Russia’s invasion of Ukraine to push massive costs onto consumers.

“Russia’s war of aggression against Ukraine has caused sharp increases in energy prices and undermined energy security. Significant increases in fossil fuel subsidies encourage wasteful consumption though, while not necessarily reaching low-income households,” OECD Secretary-General Mathias Cormann said in a statement. “We need to adopt measures which protect consumers from the extreme impacts of shifting market and geopolitical forces in a way that helps keep us on track to carbon neutrality as well as energy security and affordability.” 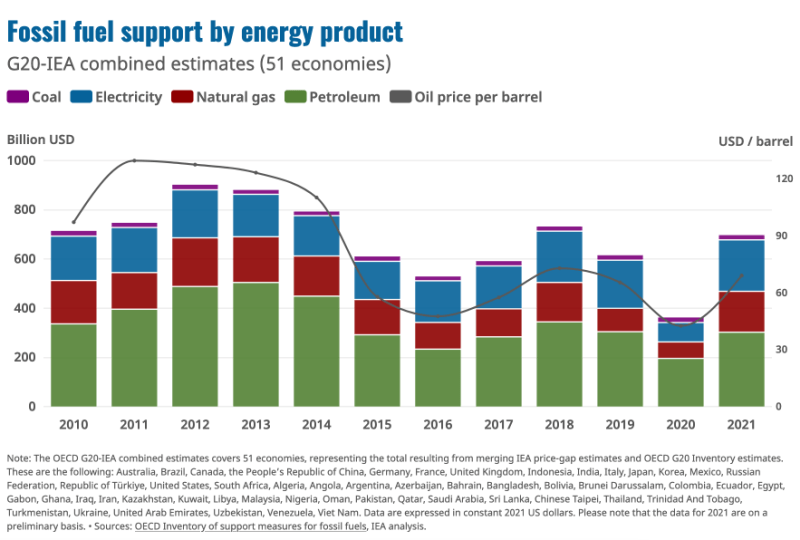 The fresh subsidy data was released days ahead of a U.S. National Oceanic and Atmospheric Administration (NOAA) report showing that “global sea levels and ocean heat content reached record highs in 2021,” an indicator that the climate crisis is accelerating as governments prop up the oil and gas industry.

“The data presented in this report are clear—we continue to see more compelling scientific evidence that climate change has global impacts and shows no sign of slowing,” NOAA Administrator Rick Spinrad said in a statement Wednesday.

“With many communities hit with 1,000-year floods, exceptional drought, and historic heat this year,” Spinrad added, “it shows that the climate crisis is not a future threat but something we must address today as we work to build a climate-ready nation—and world—that is resilient to climate-driven extremes.”