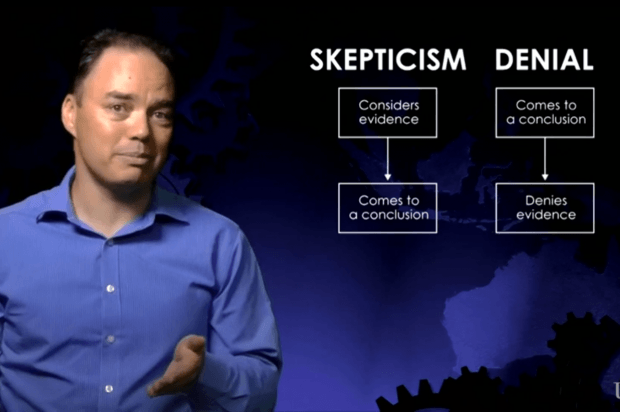 I’ve just registered for Denial101x, an online course aimed at giving me more effective tools to fight deniers wherever they are. I’m a Climate Activist whose knowledge of climate science is sound and unequivocal. It’s clear to me that humanity is facing its largest crisis, an existential one at that. Yet, millions of skeptics continue to deny climate change as a threat to future generations. This course will provide me with the resources to become a debunker of deniers. There’s always more to learn. I need to make sense of climate science denial. That’s why I’ve enrolled in climate denial school. The following is cross-posted from DesmogBlog. (Rolly Montpellier ~ Editor, BoomerWarrior).

More than 10,000 people from 150 countries have signed up for a free online university course that aims to explain the science of climate science denial and give the public the best tools to fight misinformation.

The course, from the University of Queensland in Australia, has recruited some of the world’s leading climate scientists, along with psychologists, science historians and even world famous natural history presenter Sir David Attenborough, who all gave interviews for Denial101x.  Course instructors include scientists and contributors to the Skeptical Science website.

John Cook, course developer, instructor and Climate Communication Fellow at the university’s Global Change Institute, told DeSmogBlog the seven-week course would explain everything from the fundamentals of climate change science, to the techniques used by climate science deniers and the psychologies of denial.

He hopes the course will help to “close the consensus gap” – the chasm between the 97 per cent of expert scientists who accept that humans are causing climate change and members of the public, politicians and media commentators who still reject the science.

Our course isn’t about specific individuals because climate misinformation is like a renewable resource, recycled repeatedly by many individuals – it’s a pity we can’t harness energy from climate science denial.

So our approach is to look at the empirical scientific research into the psychology of denial, and address general myths and misconceptions.

The course is recommended for anyone with a high school science qualification or higher and should take between one and two hours per week to complete. The Massive Online Open Course (MOOC) looks at what drives the rejection of climate science (spoiler alert, says Cook, “it’s political ideology”), then debunks some of the most common climate science myths, before looking at the psychology of denial and, finally, how to most effectively counter misinformation.

Summarizing these tactics of climate science deniers who go on the attack, Dr Ben Santer, of the Lawrence Livermore National Laboratory, says: “Go after the scientist. Go after their integrity. Go after their funding… make life miserable for them.”

Cook says the course’s approach is based on research in a field of psychology known as “inoculation theory”.  He says:

This research finds that to stop misinformation from spreading, we need to expose people to a weak form of the misinformation – in the same way that we stop viruses from spreading by giving people flu shots: a weak form of the virus. This process of inoculation has been adopted in some university classes by professors in the US  – three of those professors are part of our course team. But a Massive Online Open Course with the ability to reach thousands of students all over the world offers a powerful opportunity to scale up inoculation against science denial to a much wider scale.

So why a course on climate denial? Cook says it comes down to the right of the public to be well informed, but too many are currently confused by misinformation.

This confusion has significant societal consequences. For example, much of the public think there’s an ongoing scientific debate about the basic fact that humans are causing global warming – despite the fact that there’s 97% agreement among climate scientists. But when people aren’t aware of the scientific consensus, they’re less likely to support action to mitigate climate change. This is a key example of the damaging impact of misinformation, and why we need a course that counters misinformation and reduces the influence of climate science denial. Climate change affects everyone, and everyone can have a voice on what we can do to avoid the worst impacts of climate change.

Enrollments for Denial101x are still open.