We are facing a global climate emergency. Climate change is by far the most critical issue of our times—the greatest threat ever encountered by humanity. Increasingly the world is coming to accept the climate crisis. Already over a thousand jurisdictions have declared a climate emergency. And this number is rising daily.

Simply put, Below2°C follows suit with the Paris Agreement’s explicit goal to limit global warming to well below 2°C. Staying well Below2°C is the principle objective the signatories of the accord agreed to. It is the threshold humanity does not want to cross—the singular goal for decades to come. 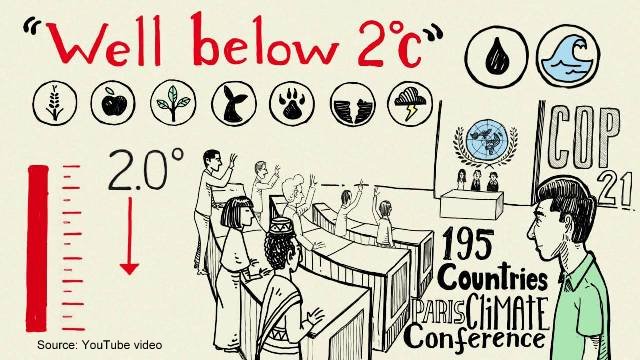 In December of 2015, 195 countries signed the Paris Agreement, the first ever global accord to combat climate change and begin the transition to a low-carbon future.

The goal of the Paris Agreement is to keep the global temperature rise this century well below 2 degrees Celsius above pre-industrial levels.

A secondary goal is to make every effort possible to limit warming to 1.5 degrees Celsius. To that end, the 2015 climate conference in Paris called for a report on global warming of 1.5°C. The Special Report on Global Warming of 1.5°C was released in October of 2018.

The report shows how the world can limit warming to the 1.5°C goal, the impacts of failing to do so, and the difference between a 1.5°C and 2°C rise in temperature. A half-degree in warming represents an enormous difference in climate impacts with the risks increasing exponentially as temperature rises.