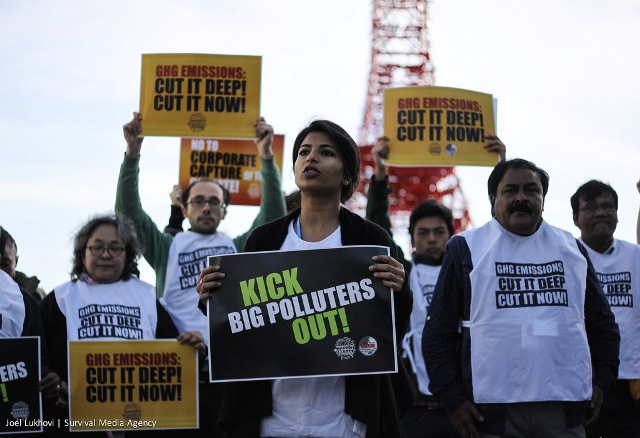 As the political momentum for full decarbonisation increases, uniting rich and poor nations, new figures show coal and fossil fuels are on their way out even faster than predicted, with coal consumption set to shrink by up to 4 per cent this year. As demand declines and risk grows, investors are retreating, with banks Morgan Stanley, Wells Fargo and ING among the latest institutions to announce cuts to coal financing, bringing the total sum divested from fossil fuels to over $3.4 trillion – 50 times higher than just a year ago.

Fossils are falling, but not fast enough. Coal’s hold on world electricity markets is weakening rapidly, with its share set to drop 2-4 per cent this year. Coal projects are collapsing, from Poland to Australia, and companies on – or over – the brink of bankruptcy. But even if no new coal plants come online, those running today are enough to jeopardise the future of the planet and its peoples. Pulling the plug on all coal plants is the only surefire way to protect citizens, communities and habitats from their multiple dangers, from fatal diseases and collapsing mines to sky-high carbon emissions. By replacing fossil fuels with renewables, the world will benefit from an energy transformation that will protect millions of lives, create new jobs, save billions of dollars, and tackle energy poverty.

Renewables are rising, and more popular than ever. More and more countries – from the world’s biggest economies to the most vulnerable nations – are joining the growing call for a zero carbon energy future. Following Africa’s lead, many others are making commitments to massively expand renewables. With over 180 countries having submitted climate pledges to the UN – which are already driving the design of new national policies to cut emissions – and leaders re-affirming their commitment to climate action as the Paris climate summit opened, it is clear that the world is on the cusp of a massive expansion of renewables capacity.

Investors are shifting the trillions they have in risky fossil fuel assets towards safe, clean renewable energy. With dirty energy assets labelled a liability, renewables are reaping the rewards: in 2014 alone, sums divested from fossil fuels increased 50-fold and renewables had a record investment year.

As the global flow of money changes course, the world will be watching to see whether governments follow suit by putting people ahead of polluters, providing the promised $100 billion per year to support those least responsible for but most vulnerable to climate change, and scaling it up after 2020.

Momentum for climate action in the real world continues to lead the politics by a significant margin, with strong strides from top-tier financiers demonstrating to politicians that the smart money is absolutely on a renewable future. The Bank of England’s Mark Carney and the former New York Mayor Michael Bloomberg launched a new global task force aimed at tracking climate-related risk for financial markets. Investors, insurers, banks and consumers will be able to access information under the plans, led by the Financial Stability Board – the G20 body that monitors the financial system.

Other notable announcements came from ABP, a Dutch pension fund that will shift 25 per cent of its €100 billion portfolio towards renewables by 2020, and the New York Common Retirement Fund (CRF) – the third biggest pension fund in the United States – which will move $2 billion towards a low carbon find. As the private sector steps up to act for the people and the planet while watching their portfolios grow, this latest effort is yet another signal that the global economy is veering towards a low and no carbon future, squeezing out those who refuse to adapt and leaving them to deal with the consequences.

New research showing that coal plants already running will push emissions 150 per cent above the internationally agreed 2°C threshold, highlights the urgent need to boost this trend. All proposed coal plants, if built, will put emissions as high as 400 per cent over the limit. Pressure is thus zooming in on countries like Turkey, Japan and Australia which still cling to coal despite its danger to health, communities and the climate, and on banks that have so far failed to see the writing on the wall by continuing to finance dirty energy projects.

Unless these few remaining fossil fuel junkies wean themselves off coal, oil and gas rapidly, they risk ending up left behind in a dirty energy past as the rest of the world embraces the just transition to the renewable energy era which is already under way and picking up speed.