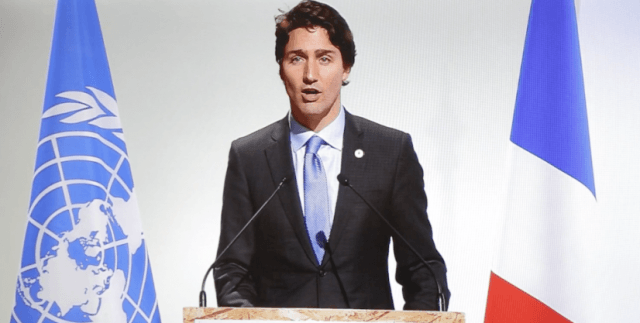 Image: screen shot from “Future generations will be proud” from Vimeo

On October 19th, Canadians elected a new government. Expectations were high – Canadians wanted change. A breath of fresh air has now swept the country and a short seven weeks later, Canada is taking its place as a leader at the climate talks in Paris.

“Canada is back” is what Prime Minister Justin Trudeau told delegates at the COP21 climate summit. At first, I was quite cynical because all Trudeau had to do was be better than Stephen Harper and that would have been a no-brainer.

During Harper’s near decade in power, Canada became the joke of the international climate action community by abandoning Kyoto, boasting the highest per capita GHG emissions and having the worst record on climate change of any industrialized country. Canada was the globe’s top climate change laggard.

Justin Trudeau’s “real change” solutions to the climate problem will first have to repair the damage caused by Canada’s obstructionist approach to global climate action efforts of the last decade. Real climate solutions will have to focus on climate justice — respect for the rights of indigenous communities — the elimination of fossil fuel subsidies, investments in clean energy and support for countries most vulnerable to climate change. In short, Canada must become a climate role model.

And that’s exactly what Trudeau has delivered in his very short time as Prime Minister. He has made it crystal clear that climate change is a “top priority” for Canadians.

In his speech to delegates, Trudeau enunciated five principles that would guide Canada as it does its part in tackling climate change:

“Canada is back, my good friends,” he told the delegates. “We’re here to help, to build an agreement that will do our children and grand-children proud.”

Following his historic address to COP21 delegates, Trudeau’s surprising actions on the climate have continued. At the Paris talks, Canada’s Environment and Climate Change Minister Catherine McKenna told an amazed crowd that Canada strongly wants an agreement that will:

“No Time to Waste”

A First Ministers meeting is planned some 90 days after COP21 but there’s “a lot more to do” on the climate before that meeting says Trudeau:

All premiers and I made serious commitments about taking the kind of action that Canadians expect, and in the coming 90 days leading up to our next first ministers meeting we will have a lot more work to do.

At the recent Commonwealth summit in Malta, Prime Minister Trudeau pledged an additional five-year contribution of $2.65 billion bringing the Canadian total in the United Nations fund to $4 billion. The fund is designed to support developing countries tackle climate change and transition to a clean-energy economy.

Furthermore, Canada has pledged $300 million annually for the funding of clean technology and innovation as part of the Mission Innovation initiative promoted by Bill Gates, French President Hollande and President Obama. The multi-billion dollar clean-tech project was launched on November 30 in Paris with the tagline “Accelerating the Clean Energy Revolution.” The aim of the new private-public partnership is to “reinvigorate and accelerate public and private global clean energy innovation with the objective to make clean energy widely affordable.”

Justin Trudeau has said that “the rest of us have a lot to learn. And no time to waste,” in reference to indigenous peoples’ knowledge on caring for the planet. There “can be no laggards” according to Trudeau.