Below 2C
Home Climate Climate Breakdown Warning: Climate Truth Is Not For The Faint-Hearted 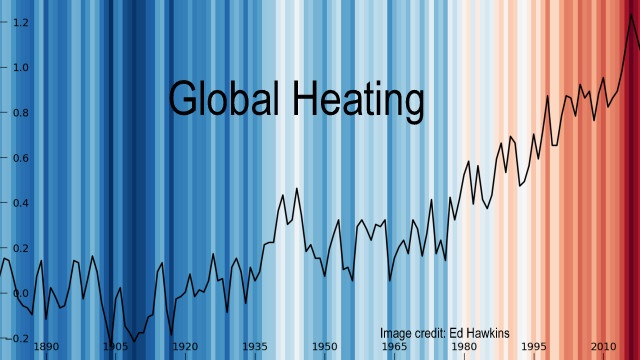 Many will find this article too “gloom and doom”. Just pretend you’ve just been given a serious medical diagnosis. You have a stage 4 cancer. After the initial shock, you need to confront it. You can’t hide from the truth.

Even if every country were to meet its climate pledges made under the 2015 Paris Accord—and they are not on a path to do so—it would be widely insufficient to avoid catastrophic climate change. The world needs an “exponential increase in ambition” according to Luis Alfonso de Alba, the UN Secretary General’s envoy on climate change. “We need to step up ambition quite radically. We are not talking about a small incremental approach,” he said.

But there are encouraging signs as world leaders prepare to attend a September climate summit. Some 80 countries are expected to step up their climate pledges by increasing their emission-reduction targets ahead of schedule. But what happens if we fail to ramp up our climate ambition?

The following article and videos show why failure is not an option. It’s a reminder and it comes with a warming. “It’s not for the faint-hearted,” writes the author, Michael Flammer. The article was first published in LinkedIn. (Editor’s Intro)

Warning: Climate Truth is Not for the Faint-Hearted

The following four short videos are not for the faint-hearted. Why should you face it anyway? Because the future of our children and grandchildren gets explained in a sober, fact-based, ruthless and startling way. So terrifying, I needed a moment to get myself together after first watching them. Each of the four videos describes our world after a global warming of 2°C, 3°C, 4°C and more.

It also explains why we can barely stop further warming once we have reached a temperature increase of 2°C. Because mutually reinforcing effects are likely to spiral climate change out of control. The longer we wait, the harder it will become to prevent this.

It is important to remember that we are currently on a path that will lead us to an increase in temperature of 3-4°C by the year 2100. Only radical and immediate reduction of greenhouse gases and ultimately the complete and worldwide abandonment of fossil fuels by 2050 at the latest will give us a 50% to 60% chance to keep the earth’s temperature below 2°C.

What happens if the world warms up by 2°C?

“At a 2°C rise, people will begin to die of what is now considered normal summers. Countries already hit by hurricanes face ever greater storms. Plant growth slows down, then stops. Plants don’t absorb CO2 as efficiently, instead emitting it. The extra carbon sees global warming spiral out of control. By the year 2100 sea levels would rise by a meter displacing 10% of the world’s population. In this 2°C future, ecosystems across the globe collapse. A third of all life on earth faces extinction.”

What happens if the world warms up by 3°C?

“If global temperature rises by 2°C the chances of avoiding a 3°C increase are slim. At a 3°C increase plants stop absorbing CO2, enough carbon builds in the atmosphere to raise temperatures by another 1.5°C by 2100. The planet is tipped into runaway global warming. Cities and farms around the world will lose their rivers and reservoirs run dry. Saltwater creeps upstream and groundwater is poisoned. This tips food production into a irreversible decline.”

What happens if the world warms up by 4°C?

“After the collapse of the Amazon and the carbon cycle, stabilising the global temperature to avoiding a 4°C increase may no longer be possible. Coastal cities will either vanish or become islands. A sea level rise of 1m every 20 years is far beyond our capacity to adapt. At this point up to 85% of the Amazon rainforest has disappeared. But the most damaging effect of this temperature is an irresistible thawing of permafrost. At least 500bn tonnes of carbon trapped below ground could be released by 2100.”

What happens if the world warms up by more than that?

“Above 4°C we are looking at a vastly different world. Rainforests have turned into deserts and rising seas reach into continents. Migrants force their way into the few habitable places left on earth. Civil wars are the inevitable outcome. To see what the world could look like at 6°C rise, we have to go back 251 million years. 95% of living species were wiped out. At sea everything suffocated. The forests are burning, the rivers are drying up. Continents are carved up by toxic oceans and corpses pile up in cities across the planet. A 6°C world is a bleak one.”

Don’t forget what you have just seen. I certainly won’t. I can’t. It will always remind me why I have become an activist from a very normal family father that I used to be. Remember these consequences whenever someone says that climate mitigation becomes kind of pricey. There simply is no price tag big enough to equal a future for our kids and eventually for the whole human civilization on earth. There will be no use for any kind of wealth in the future of our kids, if we now choose to save money instead of acting on #ClimateChange.

Each of the above shown futures is still possible, from 1.5°C up to 6°C or more. This new climate will not be temporary. It will become the new normal for thousands of years. There has been a natural climate warming over the last 20,000 years, but what mankind is about to do right now is a similar increase in global temperature in just under 200 years. That is a hundred times faster and unprecedented in all of earth’s history. It is unlikely that life will be able to adjust to this change at this rate.

The future of our children and grandchildren depends simply on a single question: How quickly will we be able to cut greenhouse gas emissions to zero?

We have no time left. Every day more greenhouse gases are dumped in the atmosphere. Every day, every week and every month that we continue to do that, is reducing our chance to survive. Or maybe we should say the chance of our children.

The following graph shows a short summary of some important milestones in the history of anthropogenic climate change and the impact of our actions so far: 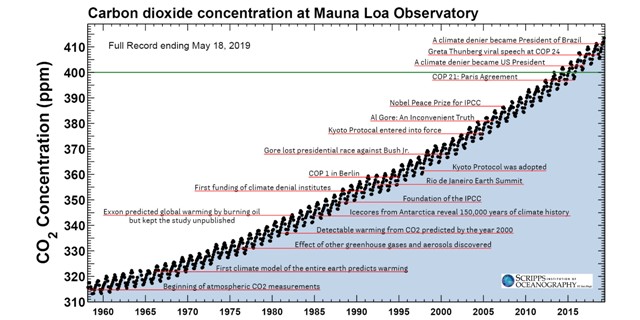 Please share this article and show it to all those who still have not completely understood how severe and irreversible the #ClimateCrisis is. We can’t avoid it anymore—1.5°C could be locked in already. All we can do, is to minimize the damage. We still have a chance to avoid a catastrophic climate change if we act now. If we act together. If we use the power of our votes.