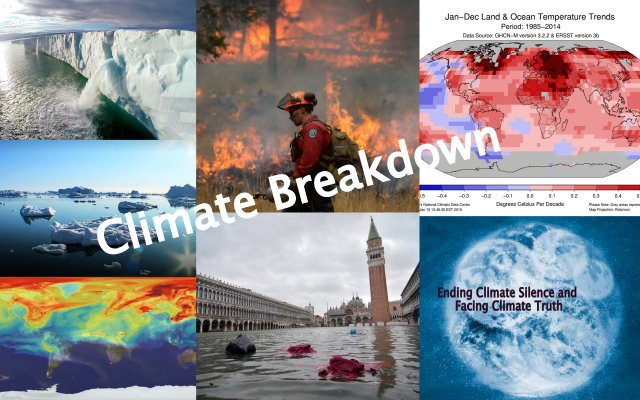 A recent report out of the U.K.—This Is a Crisis: Facing Up to the Age of Environmental Breakdown—argues that humanity needs “three shifts in understanding across political and policy communities: the scale and pace of environmental breakdown, the implications for societies, and the subsequent need for transformative change”.

Jessica Corbett is a staff writer with Common Dreams. Her article (first published in Common Dreams) is featured in Below2C under the Creative Commons Attribution-Share Alike 3.0 License and direct permission from Common Dreams.

Warning that the world is on a path toward “environmental breakdown” that will likely trigger “runaway collapse” of social and economic systems in the vein of the 2008 global financial crisis, a new report out [recently] calls for major shifts in understanding the scale and pace of environmental change, the implications of it, and the need for a transformational response.

“Human-induced environmental change is occurring at an unprecedented scale and pace and the window of opportunity to avoid catastrophic outcomes in societies around the world is rapidly closing.” —IPPR report

The report—titled This Is a Crisis: Facing Up to the Age of Environmental Breakdown (pdf)—from the U.K.-based progressive think tank Institute for Public Policy Research (IPPR), declares that “mainstream political and policy debates have failed to recognize that human impacts on the environment have reached a critical stage, potentially eroding the conditions upon which socioeconomic stability is possible.”

“Human-induced environmental change is occurring at an unprecedented scale and pace and the window of opportunity to avoid catastrophic outcomes in societies around the world is rapidly closing,” the report advises. “These outcomes include economic instability, large-scale involuntary migration, conflict, famine and the potential collapse of social, and economic systems. The historical disregard of environmental considerations in most areas of policy has been a catastrophic mistake.”

The Age of Environmental Breakdown

The report raises alarm not only about the risks of climate change driven by human activities that produce greenhouse gases, but also about behaviors tied to declining biodiversity, ocean acidification, land degradation, high levels of phosphorous and nitrogen runoff, a waning ozone layer, and air and land pollution. Considering all these factors, it concludes, “we have entered the age of environmental breakdown.”

“People are not frank enough about this. If it is discussed at all, it is the sort of thing mentioned at the end of a conversation, that makes everyone look at the floor, but we don’t have time for that now.”
—Laurie Laybourn-Langton, IPPR

The two-part transformational response envisioned by the authors would mean a socioeconomic overhaul “to bring human activity to within environmentally sustainable limits while tackling inequalities and providing a high quality life to all” as well as major steps to boost resilience to the impacts of environmental breakdown, including improvements to “infrastructure, markets, political processes, social cohesion, and global cooperation.”

However, as lead author Laurie Laybourn-Langton emphasized to the Guardian, even considering a response that matches the scope of the crisis requires first raising public awareness: “People are not frank enough about this. If it is discussed at all, it is the sort of thing mentioned at the end of a conversation, that makes everyone look at the floor, but we don’t have time for that now… It’s appearing more in media, but we are not doing enough.”

It’s not just climate change. Soil’s being lost, species dying, oceans destabilised. Let’s be frank: this is the age of environmental breakdown, #ThisIsACrisis

So we need a transformation to make economies sustainable & just

In a piece for Red Pepper magazine, IPPR researcher and report co-author Lesley Rankin highlighted the importance of reaching the public with “a more honest message” that fully captures the gravity of the current global conditions.

“A catastrophic prognosis and a call to action may feel incompatible… but to do so reflects the conflicting emotions which environmental breakdown inspires—despair, followed by grim determination.”
—Lesley Rankin, IPPR

While noting that campaigners often fear that “doom-mongering” will turn people off and spur inaction, she charges that “a catastrophic prognosis and a call to action may feel incompatible (why try to resolve something that is already so disastrous?), but to do so reflects the conflicting emotions which environmental breakdown inspires—despair, followed by grim determination.”

The report was met with widespread praise, with readers calling it “absolutely brilliant,” “essential reading for policymakers,” and “a clarion wake-up call to the world.” It also provoked demands for a #GreenNewDeal for the U.K.—following the introduction of such a resolution in the U.S. Congress last week—as well as, more broadly, “legislation now which commits government to the recovery of nature.”

The life of more than 3 billion people are being put in jeopardy as rice crops hurtle towards collapse. If enough of us rise up for long enough we can force government to represent us rather than corporate farming.

Related articles…
A Terrifying Twelve Years: Sounding the Climate Alarm Bells
Ten Years to Zero: The Emergency and the Mobilization