A new report, Still Digging: G20 Governments Continue To Finance The Climate Crisis shows that “since the Paris Agreement was made, G20 countries have acted directly counter to it by providing at least 77 billion a year in finance for oil, gas, and coal projects through their international public finance institutions….more than three times as much…as for clean energy.” The report was produced by Oil Change International & Friends of the Earth USA. 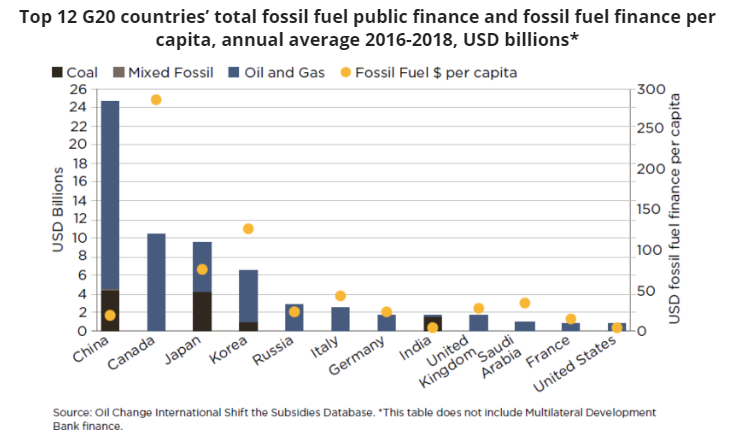 The report points out that “When ranked for fossil fuel finance relative to the size of their populations, Canada, Korea, Japan, Italy, and then Saudi Arabia were the most outsized providers of public finance for fossil fuels.” Put another way, Canada is the worst offender leading all G20 countries in per capita support of fossils.

Support a global just recovery to COVID-19 which carves a path to resilient, equitable, and zero-carbon societies instead of further locking in fossil fuel production and use. Recovery packages in response to COVID-19 must bail out workers and communities, not banks and polluting corporations. They must ensure a globally just outcome by prioritizing debt-free finance to the lowest-income countries and communities.

End all public finance for oil, gas, and coal projects after 2020. G20 governments should adopt explicit commitments both domestically and internationally to end financing for fossil fuels. This phase-out should include ending all support for fossil fuel exploration, extraction, transportation, and power plants.

Rapidly scale up investment in clean energy, energy efficiency, just transition plans, and energy access. G20 governments must align all lending and operations with a high-probability and equitable 1.5°C pathway by the end of 2020. In particular, this must include support for the implementation of just transition plans developed with workers and communities who are dependent on fossil fuels.

Ensure transparent and timely reporting on all energy finance. G20 governments should require all public institutions to provide timely accounting of the full life-cycle emissions of the projects they support. This information allows affected communities and organizations to provide input, have a clear understanding of which projects G20 governments are involved in, and monitor the implementation of those projects.

Julia Levin, climate and energy program manager at Environmental Defence Canada agrees with the concerns outlined in the report: “Canada cannot claim to be a climate leader while it allows a Crown corporation [Export Development Canada] to hand out over C$10 billion a year to oil and gas projects, while largely ignoring the clean energy sector.”

ICYMI:
Our Big Banks Are Financing The Climate Breakdown
The Managed Decline Of Fossil Fuels