Canada’s climate talk versus climate action picture is not a pretty sight. In 2015—Paris Round 1—Canada pledged the weakest emissions reduction targets, “only a 15 percent reduction after 40 years,’ writes Barry Saxifrage in his latest piece in National Observer. In 2021, under the “ratchet mechanism” (Article 4) of the Paris Agreement, countries are expected to strengthen their targets (NDCs)—Paris Round 2. 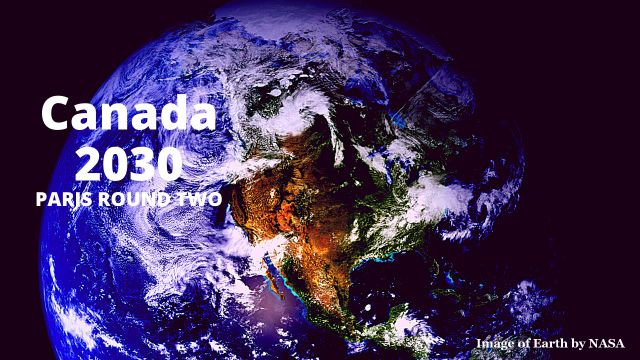 This year Canada gets another opportunity to shed the label of rogue climate polluter—the worst by far of any G7 country. Canada needs targets that will be decidedly more ambitious to line up with the science. But will our current government finally set a target it plans to meet? 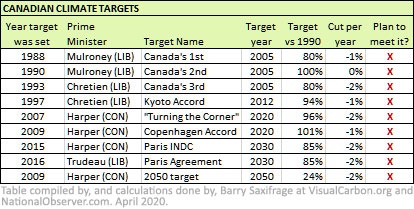 This table shows that past Canadian governments have never been serious about meeting any climate target. The present government is no different. Arguably, one might say that the Trudeau Liberals have set targets and adopted climate policy that reflect the wishes of the oil and gas sector and its lobbyists rather than heeding the call of an overwhelming majority of Canadians for urgent climate action that aligns with science and meets the scope of the problem we face.

There is little hope that the current Trudeau government will fare better than its predecessors in rolling back emissions. In fact with Justin Trudeau as Prime Minister, emissions have risen by 21% over 1990 levels. 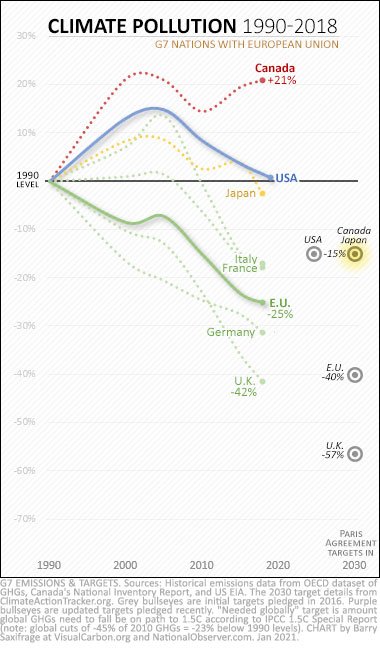 The  chart shows how the G7 and the EU have performed since 1990. “We now find ourselves the only G7 member still polluting well above the 1990 starting line,” says Saxifrage. In fact, in the last 10 years, “every country lowered emissions…except Canada. Ours went up.”

The targets on the right side of the chart show Canada with the weakest target (along with Japan) with the EU and the UK doing much better.

Paris Round 2 – Ratchet up Climate Ambition

After five years into the Paris Agreement, Canadians continue to be among the worst polluters in the world on a per capita basis. With close to 16 metric tons per person, Canada is the top CO² emitter of the G7 countries and the 3rd worst in the G20 after Saudi Arabia and Australia.

As other countries begin to strengthen their 2030 targets, Canada has three major challenges. It must:

To date, the European Union has improved its 2030 target to a 55% reduction. The United Kingdom has the lowest new target of 68% below its 1990 levels. Japan, the U.S. and Canada have yet to announce new targets for 2030. President Biden’s plan to “rally the rest of the world to meet the threat of climate change” will expose once again Canada’s double-dealing performance in the global climate arena.

“The CAT (Climate Action Tracker) rates Canada’s NDC as “Insufficient”. The “Insufficient” rating indicates that Canada’s climate commitment in 2030 is not consistent with holding warming to below 2°C, let alone limiting it to 1.5°C as required under the Paris Agreement, and is instead consistent with warming between 2°C and 3°C. If all countries were to follow Canada’s approach, warming could reach over 2°C and up to 3°C. This means Canada’s climate commitment is at the least stringent end of what would be a fair share of global effort, and is not consistent with the Paris Agreement’s 1.5°C limit.” — from CAT

If the latest climate initiative put forward by the Liberals is any indication, Canada’s climate rating is not about to improve anytime soon. Bill C-12, the Canadian Net-Zero Emissions Accountability Act, is at best a meek proposal meant to carry the Liberals to the next federal election, and at its worst, another shameful display of the climate hypocrisy that has tainted Canada’s reputation as a climate leader over the last 30 years, 9 climate targets, with ZERO success.

ICYMI:
Ottawa Net-Zero Legislation Fails To Meet the Scale Of the Climate Threat. Again.
Is Net-Zero 2050 Just Another Spin on Climate Action