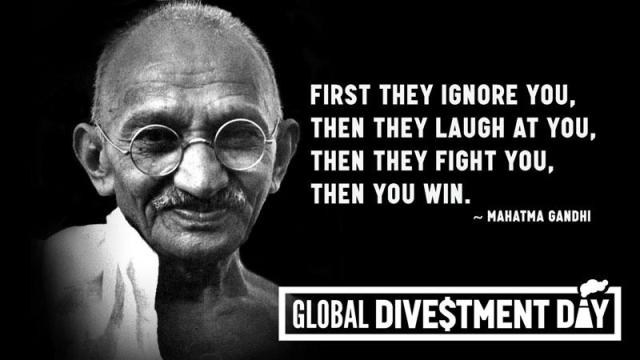 The fossil-fuel divestment movement is gaining momentum as people around the globe are waking up to the reality that climate change is upon us. It is not something that will happen in the distant future as we thought a few years back. It is here NOW! The divestment from fossil fuels is one of the effective strategies being considered by action-oriented individuals and institutions across the world. (Rolly Montpellier ~ Editor, BoomerWarrior)

The first ever Global Divestment Day kicks off tomorrow and runs through til Saturday 14 February. And it seems you’ve already put the fossil fuel industry on the backfoot before we even get started! (350.Org)

The following post by Cameron Fenton was previously featured in HuffPost Canada.

If nothing else, these attacks on divestment are proof positive of what divestment organizers have said since day one — that rather than become part of a transition to a clean and just energy economy, the fossil fuel industry plans to fight tooth and nail against it. The fossil fuel interests backing these are nothing new, they’re the same PR firms and research institutes that have helped to fuel the climate denial machine and lobbied against climate action by governments. While some may have new political allies as the faces of their astroturf efforts, the underlying truth is the same — these are institutions defending a business as usual model that ensures catastrophic climate impacts while protecting the profits of a few.

In some ways, the fossil fuel industry may actually be doing us a favour by attacking divestment head on. Up until now, most decision makers have shied away from tackling the divestment question, commissioning study upon study, trying to find half measures like partial divestment or responsible investment promises and generally playing a continuous game of kick the can. If they’ve been able, the people in charge have avoided the critical decision on whether or not their institution should continue to prop up a climate-wrecking industry, but these attacks on divestment have taken away this coveted ‘neutral’ ground.

Take the University of British Columbia for example. Over the past two weeks faculty at the school voted in 2 to 1 in favour of divestment. This officially added their voice to the over 75 per cent of students who voted in favour of divestment last year and put the call to act now squarely at the feet of UBC administrators. The school responded by citing their fiduciary responsibility, something that with studies and investment managers showing the competitive nature of fossil free investing, along with decisions like Norway’s recent dumping of coal and tar sands stocks, is less of an argument against divestment and more one supporting investors dumping fossil fuel stocks. In this moment, UBC missed a golden opportunity to show the kind of leadership that brought students and faculty together and instead tacitly sided with business as usual. It probably was not an intentional decision to take that side, but as Howard Zinn once wrote “you can’t stay neutral on a moving train” and divestment is certainly a train that is now in motion.

University board members, pension trustees, city councillors and other divestment decision makers need to pick a side. They need to choose whether they stand with the CEO’s and PR firms of the fossil fuel industry or if they stand with the students, farmers, doctors, investors, climate impacted communities and the hundreds of thousands of people that are organizing this week for Global Divestment Day.

The attacks on divestment make it event clearer that it’s no longer enough to believe in the science of climate change and want to solve the problem. History wont remember our best intentions, but it will remember action, now the question is — who is going act?