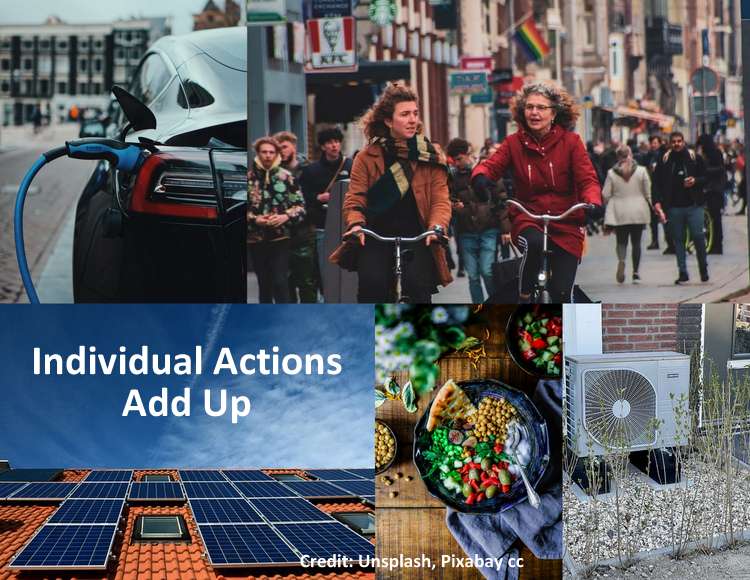 Twenty five to 30 percent of the pollution cuts needed to prevent catastrophic climate change can come from individual actions taken at the household level according to a recent Yale Climate Action article.

(Parts of this piece were previously published in Yale Climate Connections.)

Individual Actions That Add UP

Climate change is a global problem, so many people feel powerless to do anything about it. But research shows individual actions add up.

“We estimate between 25 and 30% of the total potential emissions reductions needed to avoid dangerous climate change … can be addressed at global scale over the next 30 years by individuals and households,” says Chad Frischmann of Drawdown Solutions, a research division of the nonprofit Project Drawdown.

“That is a lot higher than most people realize. It’s because we as individuals and households are a part of a broader economic system currently reliant on fossil fuels, from the food we buy, to the electricity we use, to the buildings we live in. While the vast majority of global emissions (70–75 percent) can be reduced directly by the decisions of those who run businesses, utilities, buildings, and governments, our choices as consumers, energy users, tenants, and voters have direct impact in their own right and can affect those decisions by sending signals across the system. So rather than being laden with blame and guilt, we should be owning our power to make change.” Chad Frischmann and Crystal Chissell, Drawdown Solutions

His group evaluates the potential impact of various climate solutions. And he says there are many that individuals and households can take action on, like eating more plant-rich meals, reducing the gas and electricity they use, or installing solar.

The following Drawdown info-chart shows 20 different ways we as individuals can  do our part to solve the climate crisis upon us. 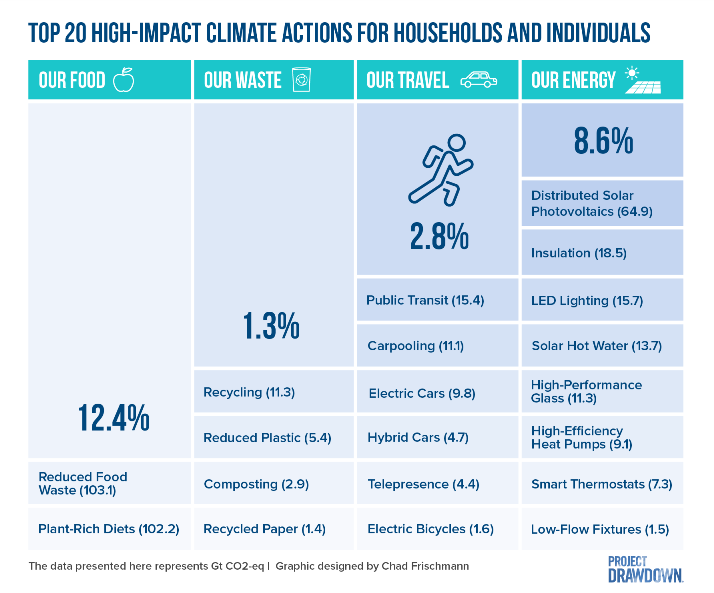 Frischmann says making these changes can inspire others to do the same. And it signals to companies that consumers want climate-friendly options.

But consumers’ choices are often limited by what’s available and affordable to them. And the majority of global emissions are caused by industry.

“So there’s a lot of power that individuals and households have, but at the end of the day, it’s business that has to change,” Frischmann says. “And its policymakers that have to change to make that all happen.”

Just as ripples spread out when a single pebble is dropped into water, the actions of individuals can have far-reaching effects. – The Dalai Lama

ICYMI:
Climate Solutions From Around the World
The Big Switch To Net Zero
Global Heating. Do We Finally Get It Now?