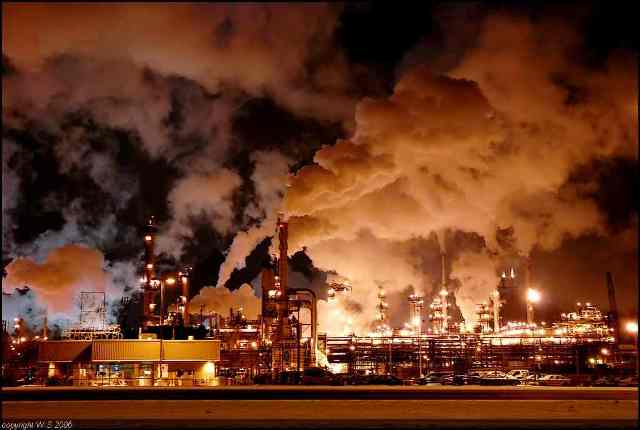 If approved, the Energy East pipeline would stretch 4,600 kilometres from Alberta through Ontario to ports in Quebec and New Brunswick. Energy East would be the largest pipeline in North America. Its chief purpose would be to carry 1.1 million barrels daily (including tar sands oil) primarily for export to foreign markets.

Energy East is Bad for the Climate – Top 7 Reasons

Right now, Canada’s tar sands are producing about 2 million barrels of oil per day. The industry would like that production to more than double to 5.2 million barrels per day by 2030. Energy East, which would transport an estimated 1.1 million barrels every day, would make up a huge part of that projected growth.

The tar sands are already the fastest-growing source of greenhouse gas pollution in Canada. Government data shows that between 2005 and 2020, all other parts of Canada’s economy are projected to achieve a reduction of 43 million tonnes, while tar sands would grow by 67 million tonnes. This means the growth in tar sands emissions would wipe out all the reductions other parts of the economy are on track to make.

The planned growth in the tar sands is the single biggest reason that Canada is now on track to miss its national 2020 climate target by a huge margin. Prime Minister Stephen Harper backs the tar sands industry’s growth plans 100 percent, and that support is poisoning Canada’s approach to climate change – bad for the climate.

2. The World is on a Carbon Budget

From a climate perspective, we all need to start burning less oil — and policies like better fuel efficiency standards for vehicles and smarter city design to encourage public transit use are making a difference now.

We can’t phase out all fossil fuels immediately: the world’s economies will continue to use some oil, gas and coal in the years ahead. But compared to other sources of oil, tar sands is among the dirtiest, producing more pollution than nearly any other crude option.

As researchers at MIT concluded in a 2010 paper that looked at how global climate action changed the demand for tar sands, “the niche for the oil sands industry seems fairly narrow and mostly involves hoping that climate policy will fail.” Betting on the tar sands means betting against the world doing what it takes to tackle climate change – bad for the climate.

New pipelines and the new tar sands operations they would support are multi-billion dollar investments designed to last for decades. Once they’re built, you can guarantee that the companies who spent that money will want to get a return. They will fight all climate policies that could lead to “stranded capital,” arguing that it’s not fair to change the rules of the game halfway through.

Energy experts call this phenomenon “lock in,” meaning that a specific piece of infrastructure can lock in its full lifetimes’ emissions once it’s built.

Think about what that really means. Tar sands companies want to keep growing their operations for decades to come; their share prices depend on continuing to develop their reserves and finding new ones. This is a vision of the future that is fundamentally at odds with a safe climate.

Energy East is a proposed $14.4 billion pipeline with a minimum 40-year operational life. So the decision about whether to build a new tar sands pipeline isn’t about two years’ worth of construction jobs. It’s really about the kind of future we want to see 20, 30, even 40 years from now.

If more than one pipeline fails to go ahead, industry will be looking at a changed landscape: growing transportation bottlenecks with no relief in sight, matched with a growing emphasis on lower-carbon options supported by people power. Suddenly the sector’s growth plans will shift from being inevitable to being very questionable. Investors will start looking at other options for their energy dollars.

4. Tar Sands Must Stay in the Ground

According to a recent article published in Nature, scientists now estimate that in order to have a chance at preventing dangerous levels of climate change, about a third of all oil reserves must never leave the ground. Their warnings about the tar sands are more dire: 85% of those reserve must never be touched, because they produce so much more emissions.

Energy East would generate at least 30-32 million tonnes of additional greenhouse gas emissions every year – just from the process associated with extracting the bitumen. This doesn’t even take into account the end-product of the oil, which may be burned, generating even more emissions.

This is a significant number – approximately equaling the emissions saved by Ontario’s closing of its coal plants, or the amount of emissions generated every year by every car in Ontario, or approximately 7 million cars – bad for the climate.

There’s no way that Stephen Harper’s government and the Government of Alberta would be pushing so hard for these pipelines if they didn’t matter. Government and industry have said it again and again: pipelines allow the tar sands to grow.

In the US, President Barack Obama will soon veto the proposed Keystone XL pipeline demonstrating that climate change is now a critical factor in making decisions about our energy future. A ‘no’ on Keystone XL will force everyone to challenge the assumption that oil reserves will inevitably be developed, making potential tar sands investors think twice about other expansion plans.

In Canada, we have a similar decision to make around the proposed Energy East pipeline. We want our political representatives to recognize that the future they would be locking us into with Energy East is one that is incompatible with avoiding the worst impacts of climate change.

Canada lacks policies to reduce carbon emissions. We need regulations to reduce emissions from tar sands production. Those rules must be strong enough to at least get Canada to meet its 2020 climate target and make deeper cuts after that.

7. What About Future Generations

More than anything, pipelines like Energy East would lock Canada into an outdated energy model for decades to come, as other countries and economies move on to technologies of the future. Canadians must say ‘no’ to Energy East and instead say ‘yes’ to a clean-energy future.

Sources: The Council of Canadians, Ecology Ottawa – Top 9 Reasons Why Energy East is Bad for the Climate
_____