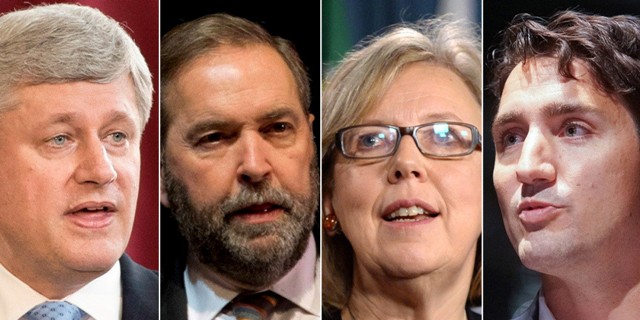 I’m forwarding this letter to all four federal party leaders. The letter is about the need for a more ambitious leadership on climate change in Canada. It asks each of the four leaders four questions if they form the next government.

2015 is on track to be the hottest year in recorded history. Wildfires are sweeping Canada, the warming in the Arctic is through the roof and heat waves and droughts threaten livelihoods and lives around the globe.

We Canadians are now in the midst of an election campaign, certainly the most important one in my lifetime. A few short weeks after the October 19 election, world leaders will gather at the UN climate negotiations in Paris to attempt to strike a binding global agreement to cut greenhouse gas emissions. But the slow pace of crucial negotiations that just ended in Bonn (Germany) is worrisome. Negotiators have failed to agree to common grounds that would have set the table for Paris in December.

Recent research shows that the current commitments to curb emissions fall significantly short of what is needed to limit global warming to 2°C which is the threshold beyond which the world will face catastrophic consequences. “This has the makings of a global failure of ambition,” wrote Cameron Fenton of 350 Canada in a recent email.

Canada’s commitment to cut carbon pollution by 30% below 2005 levels by 2030 is a far weaker target than the US and EU. The Canadian plan is deeply flawed by failing to address the Alberta Tar Sands, the country’s largest source of carbon emissions. With this kind of commitment, we Canadians will shamefully continue to be a climate laggard internationally.

The time has come to change climate politics in Canada. I’m appealing directly to Stephen Harper, Elizabeth May, Thomas Mulcair and Justin Trudeau (the order is alphabetical) to make climate action a priority during the remaining weeks of the election campaign. What Canadians need is a much more ambitious climate leadership.

My question to federal leaders Harper, May, Mulcair, Trudeau – is: If you form the next government, are you prepared to:

My message to Canadians is simple: SPEAK OUT NOW. Please help me challenge our political leaders to change Canada’s climate politics by writing a letter to the four leaders whose email is available below.

Feel free to use my letter or excerpts from my letter or write your own. But make sure to contact the four party leaders vying to become Canada’s next Prime Minister.

Change starts with you, but it doesn’t start till you do.

You may also find my letter at Unpublished Ottawa and follow the Letter Writing Campaign to contact our political leaders about Climate Politics in Canada.