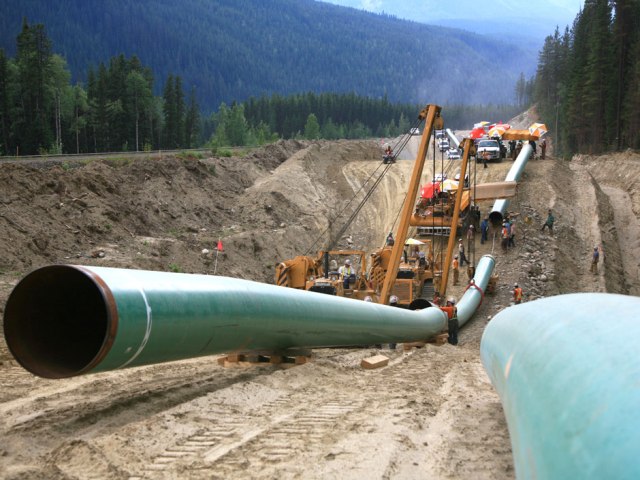 I’m pleased to welcome Derek Leahy as a contributor to BoomerWarrior. Derek is a freelance writer who volunteers his time to raise awareness about issues relating to pipelines such as the Line 9, Energy East and Kinder Morgan projects. (Rolly Montpellier~Editor for BoomerWarrior).

For the second time in two days Prime Minister Justin Trudeau has been called on to suspend the regulatory review process for Kinder Morgan’s Trans Mountain pipeline project in British Columbia. Final hearings for the project begin next week.

“You are going to break your campaign promise to overhaul Canada environmental regulatory regime because of your refusal to suspend or cancel the reviews of the Kinder Morgan Trans-Mountain pipeline and TransCanada’s Energy East pipeline,” Cam Fenton, 350.org’s Canadian tarsands campaigner, said in a letter sent to Trudeau Wednesday.

“If you will not show the necessary leadership to stop these reviews, people will.”

Yesterday, Burnaby, B.C. Mayor Derek Corrigan made headlines with his letter to Trudeau requesting the review of the Trans Mountain project be suspended on the grounds the current federal regulatory framework is “deeply flawed” and “inadequate.”

Trudeau’s Liberals campaigned on restoring public faith in the National Energy Board (NEB), Canada’s pipeline regulator, during last year’s federal election. Under the previous federal government, the board went through extensive changes that resulted in limited public participation in regulatory hearings and restrictions on what public concerns were considered relevant to the process.

The federal government insists it still plans on overhauling the NEB to ensure “robust oversight and thorough environmental assessments,” but pipeline projects like Trans Mountain and Energy East will continue to proceed under the ‘old rules’ established by the Harper government.

Adding to the frustration of the City of Burnaby, and groups like 350.org is a statement from Trudeau during a campaign stop in Esquimalt, B.C. last August where he claimed on camera the NEB overhaul would apply to “existing projects” currently under review like Trans Mountain.

“No, they’re not going to approve it in January. Because we’re going to change the government,” Trudeau told Kai Nagata from the Dogwood Initiative in response to questions about the Trans Mountain pipeline project. “And that process needs to be redone.”

Increasing public calls for immediate NEB reform could bring an end to Trudeau’s ‘honeymoon period,’ at least on the environment profile.

The Trudeau government’s performance in Paris at the UN climate summit in December far outshone any showing by the previous federal government. Trudeau has also pledged to meet with premiers to hammer out a national framework for reducing greenhouse gas emissions within the next two months.

Failing to quickly overhaul the National Energy Board could undermine the Trudeau government’s intentions of rebuilding the strained relationship with indigenous peoples in Canada.

The influential Assemblies of First Nations in Quebec and Labrador, Manitoba and British Columbia have all requested the Trudeau government cancel the current reviews of Trans Mountain, Energy East and the Line 3 pipeline.

“Our First Nations in British Columbia, Manitoba and Quebec call for the establishment of a new pipeline review and assessment process, to be developed and implemented in collaboration with First Nations, that will enable a thorough and objective environmental assessment of these pipelines,” a letter signed by all three assemblies states.

The 350.org letter is part request, part ultimatum. The organization says it will use a “People’s Injunction” if the reviews of Trans Mountain and Energy East are not cancelled or at least suspended by this Friday, January 15.

According to the group’s website, a People’s Injunction is a “plan to use creative, non-violent means to ensure that the Prime Minister and the new federal government keep their promises to overhaul pipeline reviews to include climate change and community voices.”

This article was previously posted on DesmogCanada by Derek Leahy.