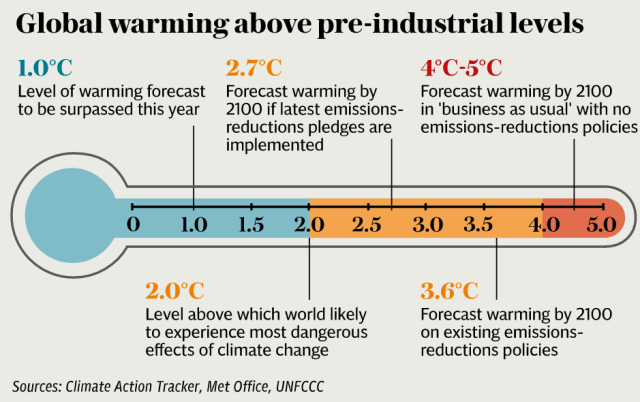 The world is ruled by those who show up. And world leaders did show up last December in Paris to sign the first climate agreement that would shape climate action for decades to come and perhaps to the end of this century. After 20 years of international climate negotiations, The Paris Agreement was formally adopted on December 12, 2015. So, will the Paris Agreement save the planet or has it damned our world?

“This is truly a historic moment…For the first time, we have a truly universal agreement on climate change, one of the most crucial problems on earth.” (United Nations secretary general, Ban Ki-moon)

Like millions of others around the globe I got caught up in the euphoria of the moment; I was filled with hope and optimism. We have finally come to our senses I allowed myself to think. But then climate reality set in.

Now that the celebrations are over, now that the champagne has stopped flowing and now that the high-fives and congratulatory back-slapping for a job well done are over, it’s time to take a more sober look at what has really been accomplished.

Former NASA scientist James Hansen calls the agreement a fraud and a fake with “no action, just promises…..we’ll have a 2 degree warming target and then try to do a little better every five years. It’s just worthless words.” Hansen claims we are already at a level of emergency. We do not need more blue-sky pledges.

Paris Agreement has Damned Our World

Naomi Klein, Canadian environmentalist and climate activist, has called the climate deal scientifically inadequate. Bill McKibben (350.org) stated that, “The world’s governments have now announced their intentions. And so the rest of us can hold them to those promises, or at least try. What, you want to build a pipeline? I thought you were going to go for 1.5 degrees. You want to frack? Are you fracking kidding me? You said you were going for 2 degrees at the absolute worst.”

Inadequacies of the Agreement

Gap between evidence and promise

The gap between what is needed to make the planet livable for future generations and the tenuous promises of the agreement is shocking. Even if the 195 signatories to the deal attain their respective emissions targets, the agreement will lock us into a future of 3-4 degrees of planetary warming–a truly catastrophic and unimaginable nightmare.

Just before the start of the Paris talks, Dahr Jamail (Truthout Report) claimed that the Paris climate talks would be too little too late:

Well in advance of the Paris talks, the UN announced that the amount of carbon dioxide already in the atmosphere has locked in another 2.7 degrees Celsius warming at a minimum, even if countries move forward with the pledges they make to cut emissions. Hence, even the 2 degree Celsius goal is already unattainable….The faux goal of 2 degrees Celsius continues to be discussed. Meanwhile, the planet burns.

Profit or the Planet

The Paris agreement will operate within an economic framework that fails to recognize the primary culprit of global warming and climate change–capitalism is inherently unsustainable. The deal continues to support an economic system that demands infinite growth on a planet with finite resources, a system which has already produced climate chaos around the globe.

We have twiddled with the temperature dial–1.5 or 2 degrees–while failing to address the real causes–a debt-bound economic system, the myth of progress and our millennia-long separation from wild nature on which we depend for everything.

Putting a price on carbon is recognized world-wide as the primary tool for reducing emissions and reaching a  zero-carbon reality sometime in the second half of this century. But the Agreement fails miserably to address carbon pricing. It includes murky semantics where carbon trading is referred to as “internationally transferred mitigation outcomes”. Article 6 provides for an entirely new, UN-controlled international carbon market mechanism where countries will be able to trade carbon to help each other to achieve their own targets for emissions cuts. A CounterPunch article claims that Paris has set us up for failure:

Carbon markets basically function as a delaying tactic. It’s been that way ever since their first inclusion in the 1997 Kyoto Protocol. The EU-ETS for instance, the first, biggest and most significant of all trading schemes, simply hasn’t delivered. It took the best part of ten years for it to start after Kyoto, and once in action it was riddled by fraud, corruption, over-allocation of permits and perverse incentives for carbon offsetting – all contributing to the fact that the price for carbon is so low that nobody cares.

According to the U.N., livestock production is responsible for 14.5 percent of global greenhouse gas emissions. And yet, animal agriculture and the consumption of meat have been largely ignored at the Paris climate talks leading up to the climate deal.

A University of Cambridge study finds that business-as-usual food consumption will eat up all of our global GHG budget by 2050, with nothing left for energy, transportation and other sectors.

The discussion surrounding “overpopulation” continues to be ignored. And yet, it is the proverbial elephant in the room. It is a taboo to even talk about this issue. By 2050, another 2 billion people will have been added to the planet putting even more strain on already depleting resources.

“Without pressure from ordinary people, world leaders would have gladly ignored this problem [global warming] entirely. It’s  pressure from people that will close the gap between what was signed today and the action we need“, wrote May Boeve of 350.0rg in a December email. I started this piece by saying that the world is ruled by those who show up. But change only happens when people on the streets take action.