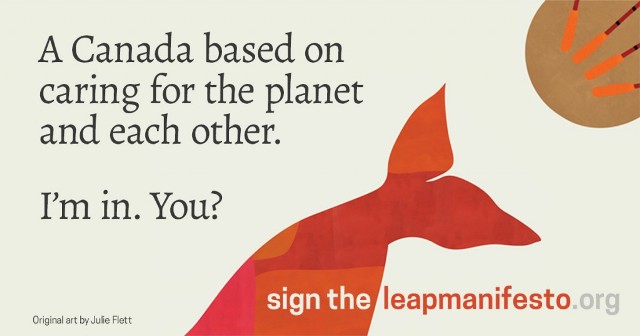 In Now is the Time to Leap, I posted a condensed version of the Leap Manifesto released on September 15 by representatives from Canada’s Indigenous rights, social and food justice, environmental, faith-based and labour movements. To date, more than 27,000 signatories have added their name to the Leap.

Seth Klein, Director of the BC Canadian Centre for Policy Alternatives, says that ” what the Leap calls for is reasonable, affordable, and doable.” In his Vancouver Sun OpEd he describes the Leap as “an aspirational document neither far-fetched nor far-left.”

This transformation is our sacred duty to those this country harmed in the past, to those suffering needlessly in the present, and to all who have a right to a bright and safe future.

Now is the time for boldness.