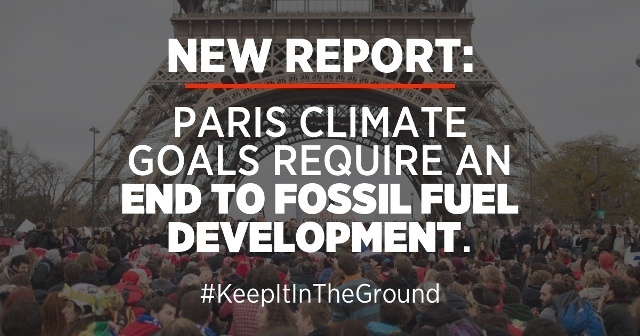 If you found the old climate math somewhat scary, you will find the new climate math of 2016 horrifying. A new study just released, The Sky’s Limit, shows the need to keep carbon in the ground by “stopping all new fossil fuel infrastructure and industry expansion” immediately.

In July of 2012, Bill McKibben wrote about three numbers in Rolling Stone to focus the public’s attention on the “seriousness of our predicamment.” McKibben said that the three numbers — 2°C, 565 Gigatons and 2,795 Gigatons — “allow us to understand our precarious, our almost-but-not-quite-finally hopeless” situation.

This 2013 video provides the significance of the 2012 climate math.

In 2012, 2°C of warming was acknowledged to be the line in the sand — how much the world said (in Copenhagen) would be safe to let the planet warm. In order to stay below that threshold, scientists were very clear about what needed to be done. To have a reasonable chance of staying below 2°C, the world could not emit more than 565 gigatons of CO2 — 5,650,000,000 tons — into the atmosphere.

However in just eleven more years we will pass that critical red line. But the really scary number is how much carbon the fossil fuel industry already has in its reserves. That number is 2,795 Gigatons, five times more the amount that will keep the planet at less that two degrees Celsius of warming.

“Once you know [those numbers]” said Bill McKibben in 2012, “then you understand the essence of this problem.”

The 2016 climate math deals with how much more new digging and drilling of fossil fuels we can do. The answer is ZERO. Zero expansion! In his recent article in the New Republic, McKibben says:

The embedded carbon emissions from the oil, gas, and coal in currently operating fields and mines…where the wells are already drilled, the pits dug, and the pipelines, processing facilities, railways, and export terminals constructed….if they run to the end of their projected lifetimes, will take us just beyond the Paris Agreement’s 2°C warming limit, and even further from the goal of 1.5°C.

Once an extraction operation is underway, it creates an incentive to continue so as to recoup investment and create profit, ensuring the product – the fossil fuels – are extracted and burned. These incentives are powerful, and the industry will do whatever it takes to protect their investments and keep drilling,” he said. “This is how carbon gets “locked-in

If we dig out the reserves in coal mines and oil fields currently in operation, we will pass 2°C. Remember the Paris Agreement and the aspirational goal of stopping global temperature rise to 1.5°C? Well, new estimates  by scientists tell us that to have a 50-50 chance of reaching that Paris goal we can only pour another 353 Gigatons of carbon into the atmosphere.

Stephen Kretzmann is the executive director for OCI. “Living up to the Paris Agreement means we must start a managed decline in the fossil fuel industry immediately — and manage that decline as quickly as possible,” says Kretzmann.

“Managed decline” means we don’t have to grind everything to a halt tomorrow; we can keep extracting fuel from existing oil wells and gas fields and coal mines. But we can’t go explore for new ones. We can’t even develop the ones we already know about, the ones right next to our current projects.

If society is serious about the Paris Agreement and saving our world, then it must get serious about taking drastic steps now. The continued expansion of fossil fuel extraction is actually and truly “climate denial”.

Two basic strategies are required to avoid catastrophic climate change. Firstly, we need to stop any further expansion of fossil fuels. And secondly, we must start scaling back immediately.

Investment projections in new extraction sites and infrastructure over the next two decades add up to a mind-blowing US$14 trillion according to the OIC report.

Keeping fossil fuels in the ground is the only way to stop global warming and ensure a future for our children and grandchildren. It’s simple. It’s the crucial first step. This means no new drilling leases, no more exploration, no new pipelines and no new processing facilities. None!

The scaling back of current operations must begin now. We must close coal-fired plants and coal mines. We must cap Tar Sands production. We must reduce the number of fracking installations. We must end fossil fuel subsidies. We must freeze all planned infrastructure projects.

The scale-back, supported by massive investment in renewable technology, will ignite a clean energy revolution greater in scope than the industrial revolution of the last two centuries. We stand on the threshold. And by managing the decline effectively, we can replace oil, gas, and coal quickly enough to continue to meet both our energy needs and our environmental goals. “We can do so in a way that protects workers, communities and the climate,” says Greg Muttitt (author of The Sky’s Limit Report).

The new climate math is clear as a bell. Thinking that we can continue to support fossil fuels and somehow escape the reality of climate change is flawed reasoning.

We are in a deep hole. And when you find yourself in a hole, you need to just stop digging.