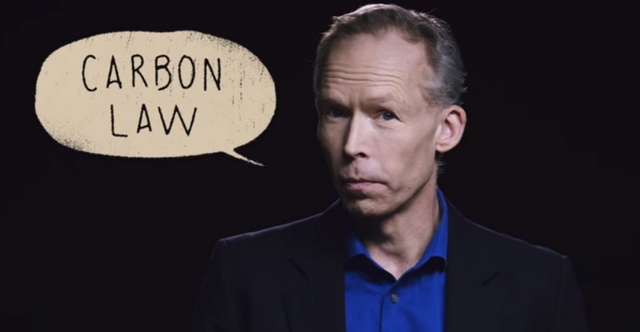 Writing in the journal Science, an international team of researchers led by Johan Rockstrom (Stockholm Resilience Centre director), proposes a solution to encourage the world to transition to a low-carbon economy within a few decades. This new carbon roadmap would be driven by a “Carbon Law”.

In a recent article, Stephen Leahy outlines how such a carbon law would provide the pathway for rapid decarbonisation.

The Carbon Law says human carbon dioxide (CO2) emissions must be reduced by half each decade starting in 2020. By following this “law”, humanity can achieve net-zero CO2 emissions by mid-century to protect the global climate for current and future generations.

A “carbon law” is a new concept unveiled March 23 in the journal Science. It is part of a decarbonization roadmap that shows how the global economy can rapidly reduce carbon emissions, said co-author Owen Gaffney of the Stockholm Resilience Centre, one of international team of climate experts.

“Coal power plants under construction and proposed in India alone would account for roughly half of the remaining carbon budget.” –Steven Davis

To keep the global temperature rise to well below 2°C, emissions from burning fossil fuels (oil, gas and coal) must peak by 2020 at the latest and fall to around zero by 2050. This is what the world’s nations agreed to at the UN’s Paris Agreement in 2015. Global temperatures have already increased 1.1 degrees C.

“After the Paris agreement we began to work on a science-based roadmap to stay well below 2C,” Gaffney told IPS.

The “carbon law” is modelled on Moore’s Law, a prediction that computer processing power doubles every 24 months. Like Moore’s, the carbon law isn’t a scientific or legal law but a projection of what could happen. Gordon Moore’s 1965 prediction ended up becoming the tech industry’s biannual goal.

A “carbon law” approach ensures that the greatest efforts to reduce emissions happen sooner not later, which reduces the risk of blowing the remaining global carbon budget, Gaffney said.

“Global emissions have stalled the last three years, but it’s too soon to say if they have peaked due largely to China’s incredible efforts,” he said. 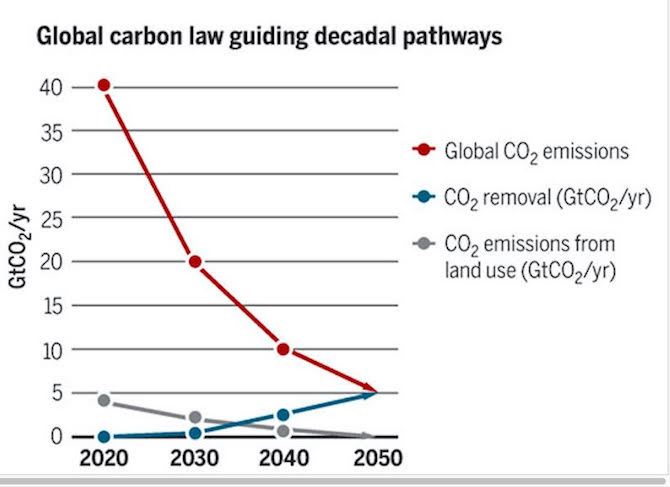 “In the last decade, the share of renewables in the energy sector has doubled every 5.5 years. If doubling continues at this pace fossil fuels will exit the energy sector well before 2050,” says lead author Johan Rockström, director of the Stockholm Resilience Centre.

The authors pinpoint the end of coal in 2030-2035 and oil between 2040-2045 according to their “carbon law”. They propose that to remain on this trajectory, all sectors of the economy need decadal carbon roadmaps that follow this rule of thumb.

“We identify concrete steps towards full decarbonization by 2050. Businesses who try to avoid those steps and keep on tiptoeing will miss the next industrial revolution and thereby their best opportunity for a profitable future,” said Hans Joachim Schellnhuber, director of the Potsdam Institute for Climate Impact Research in Germany.

Elements of these roadmaps include doubling renewables in the energy sector every 5-7 years, ramping up technologies to remove carbon from the atmosphere, and rapidly reducing emissions from agriculture and deforestation.

The immediate must-do “no-brainer” actions to be completed by 2020 include the elimination of an estimated 600 billion dollars in annual subsidies to the fossil fuel industries and a moratorium on investments in coal. Decarbonization plans must be in place for all cities and major corporations in the industrialized world.

Rapidly growing economies in India, Indonesia and elsewhere should receive help to take a green path to prosperity. They cannot use coal as China did because CO2 emissions are cumulative and there is little room left in the global carbon budget, said Gaffney.

This is an extremely urgent issue. India is already on the brink of taking the dirty carbon path.

“Coal power plants under construction and proposed in India alone would account for roughly half of the remaining carbon budget,” said Steven Davis of the University of California about his new study that will be published shortly.

Davis, who was not involved in the carbon law paper, agrees that rapid decarbonization to near-zero emissions is possible. Cost breakthroughs in electrolysis, batteries, carbon capture, alternative processes for cement and steel manufacture and more will be needed, he told IPS.

Failure is Not an Option

All of this will require “herculean efforts” from all sectors, including the political realm, where a cost on carbon must soon be in place. Failure to succeed opens the door to decades of climate catastrophe.

“Humanity must embark on a decisive transformation towards complete decarbonization. The ‘Carbon law’ is a powerful strategy and roadmap for ramping down emissions to zero,” said Nebojsa Nakicenovic of the International Institute for Applied Systems Analysis (IIASA) in Austria.

This article was first published in Inter Press Service News Agency by Stephen Leahy. It is reproduced in Below2°C with his permission.