Canada is one of the few countries in the world to have adopted a national climate action plan – The Pan-Canadian Framework on Clean Growth and Climate Change. But beware! It’s just a facade. It’s a climate action charade.

The framework has 4 main pillars: 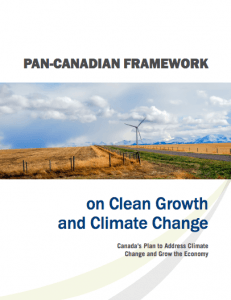 So let’s give Trudeau’s Liberals credit for that achievement. The plan does include carbon pricing reaching $50/tonne by 2022, regulations to cut methane and HFC emissions, a phase-out of coal-fired power by 2030, promises to develop new building codes, a zero emissions vehicle strategy and a Clean Fuels Standard. But that’s where the good news abruptly ends. Where is the follow-up for the climate plan? Do we have an implementation plan? What is the clean transition plan?

The Pan-Canadian Framework is strong on climate rhetoric but very weak on concrete actions that will achieve the emissions-reduction targets set out by Canada in the Paris Agreement. Nor does the Trudeau government appear to be taking its climate targets seriously. Its actions fall far short of climate pledges made in Paris.

The mantra of the Canadian action plan is “the environment and economy go together” — a myth propagated by the Trudeau Liberals. As a member of Citizens’ Climate Lobby (Canada), I’m often called upon to lobby Members of Parliament (MPs) to discuss climate policy. This well-rehearsed mantra is faithfully repeated and embedded in MP speaking notes. “The environment and economy go together” is really just code talk for the economy is first, always first, and we’ll get around to the environment later, much later, and only if we really have to.

Trudeau’s attempt to convince Canadians that the approval of fossil fuel projects is needed to finance the clean energy transition is bewildering and deceitful – a well-calculated lie. We cannot reduce carbon emissions by expanding the production of Tar Sands oil and building pipelines.  By what twisted form of logic can pipelines help transition to a green economy?

A Parallel Universe of Climate Truth

The reality is simple. If you keep saying something long enough – whether right or wrong – it becomes public perception.  One only has to look south of the border to see this at work. After all, Trump lied his way to the US Presidency. Trudeau’s deliberate lukewarmism – the mistruths and half-truths — on the climate goes a long way. It’s easy for Canadians to feel good about supporting climate action especially since it causes them no inconvenience. There is no need for making any messy changes in their current lifestyles.

However, we would do very well to remember that if we’re not feeling the need to make changes, then we’re not doing enough.

Since Trudeau’s election to office in October of 2015, I’ve written and posted extensively about the climate hypocrisy of this self-proclaimed world climate leader. Trudeau has displayed two climate faces since the Paris talks of December 2015. While sporting his Paris face, Trudeau proclaimed that “Canada is back, my good friends….We’re here to help, to build an agreement that will do our children and grand-children proud.”

But while wearing his domestic climate face, Trudeau had become the cheerleader-in-chief of the fossil fuel industry. His dishonesty and double-dealing are shameful. It’s slightly more respectable than outright climate denial and deliberately well positioned away from climate alarmism, but it is nevertheless a subtle, deceitful and underhanded brand of denialism. The new climate denial is no longer about climate science, human-caused global warming, mitigation and adaptation, or run-away climate change.  The new climate denial is about action versus inaction. And Inaction is Winning.

Prime Minister Trudeau’s attempt to blend climate action and fossil-fuel expansion is a textbook case of cognitive dissonance. Trying to convince Canadians that our path to a clean energy fossil-fuel-free future must first pass through a huge expansion of Tar Sands production and fossil-fuel infrastructure development is ludicrous. The two concepts are irreconcilable. And the PM is doing intellectual cartwheels to try to convince Canadians that he can do both simultaneously.

Apparently the plan is to reduce our emissions to honor our 2030 Paris commitments by first increasing them until around 2029. And then we will just flip the switch to low emissions. What a great strategy Mr. Trudeau.

Caving in to CAPP (Canadian Association of Petroleum Producers)

The most recent evidence of Trudeau’s two-step-forward and one-step-backward dance is the recent caving in to intense lobbying by CAPP. The group obtained a delay in tackling emissions of methane from the Tar Sands for two more years. Watch for the Liberals to re-announce the plan to reduce methane from the oil patch in the spring of 2019, just months before the next federal election. The message will be spun as a positive announcement meant to show the electorate that the government is serious about climate change, once again.

The business-as-usual strategy of the Trudeau Liberals when it comes to fossil fuels is not what Canadians need. It is not what the world needs.

At a time when the world needs the inspirational leadership of Winston Churchill during WWII and John F. Kennedy during the Cuban crisis and the beginning of the Apollo program, we are stuck instead with the likes of Donald Trump in the US and Justin Trudeau in Canada.

Donald Trump is a creep and unpleasant to look at, but at least he’s not a stunning hypocrite when it comes to climate change. Bill McKibben

Despite his declarations about the validity of climate science and the urgency of transitioning to a clean energy platform, his actions, or rather his inactions are creating severe risks for future generations of Canadians. We are going in the wrong direction both environmentally and economically.

Prime Minister Trudeau’s climate action charade must be viewed for what it is, a clever facade and smooth public relations campaign to lull Canadians into a deep sleep over the climate until after the 2019 federal election.