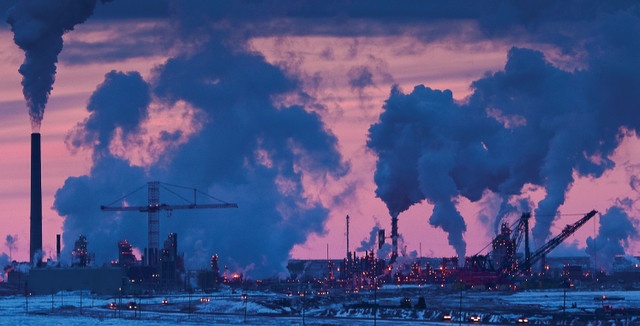 Canada and the other signatories to the Paris Accord have committed to keeping the warming of the planet below 2 degrees Celsius. But now, close to two years after the signing, that goal is fast becoming a fantasy. In this article, Mitchell Beer exposes the widening gap between Canada’s emissions trajectory and its Paris targets. This article was first published in The Energy Mix.

The gap between Canada’s climate action plan and its 2030 commitments under the Paris agreement is actually 161 megatonnes (Mt)—nearly three times more than the 66 Mt the Trudeau government acknowledged in its latest report to the UN Framework Convention on Climate Change—according to analysis released this week by the Pembina Institute and San Francisco-based Energy Innovation.

The revelation comes in the same week that auditors-general from Canada and nine provinces concluded that governments have no coherent plan to reduce emissions or adapt to the effects of climate change, and National Observer analyst Barry Saxifrage noted that a large chunk of Ottawa’s 2030 emission target is set to be met by buying carbon offsets in the United States, rather than enacting domestic emission reductions.

The Pembina-Energy Innovation report marked the release of an open-source Energy Policy Simulator that anyone can use to test the impact of different GHG reduction options for Canada. One reason for developing it: Canada has never released the modelling behind the Pan-Canadian Framework on Clean Growth and Climate Change, so there’s no way to check the assumptions baked into the model. 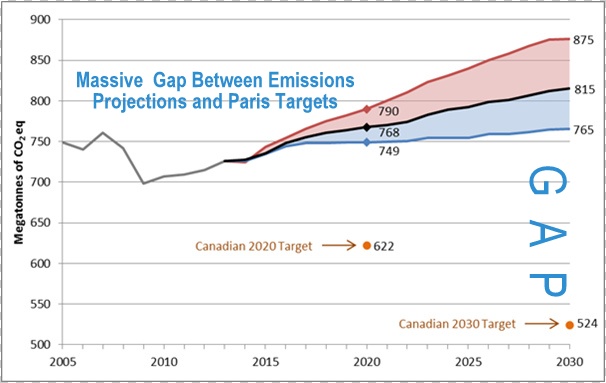 In their own 16-page report based on the simulator, Pembina and Energy Innovation break out the emissions reduction potential of the different elements of the pan-Canadian plan and calculate their combined impact by 2030. “Stronger policy, or additional policies, will be necessary to achieve Canada’s commitments under the Paris Climate Accord,” the report states. It identifies carbon pricing and methane capture and destruction (where fossils have been pressuring Canada to slow the pace, with some success) as the two most effective policies in the mix, with energy-efficient building standards becoming more prominent by 2050 as a slow-moving building stock turns over. (Source of graph: Ministry of Environment with text added by editors of Below2°C).

While the team of five authors from Pembina and Energy Innovation commends Canada for “creating an ambitious policy package” with the pan-Canadian plan, they stress that the country would need “an extension and strengthening of the PCF policies” to come close to hitting its 2030 Paris target—the same one Environment and Climate Change Minister Catherine McKenna said she is determined to meet, in response to this week’s critique from the auditors-general [video].

The Problem With Offsets

In his National Observer analysis, Saxifrage is less complimentary, contending that the pan-Can plan “doesn’t even get halfway to its goal because of problems buying offsets from the U.S.” The offsets account for 59 megatonnes of emission reductions per year by 2030, he says, equivalent to all the carbon pollution from the four Atlantic provinces plus Manitoba, and not much less than the 80 megatonnes the country will save through other measures.

Saxifrage explains that the plan rests on four Canadian provinces’ membership in the Western Climate Initiative, a carbon cap-and-trade initiative led by California. The offsets would reflect the reality that carbon cuts are less expensive in California’s larger, wider economy than they are in Canada. “In theory, Ontario and Quebec benefit by paying less than cutting emissions at home,” he notes. “The down side is that they are sending money out their economies, and the provinces are making the low-carbon transition more slowly.”

The more immediate problem is that those deals may no longer be doable—at least as long as a former reality TV star occupies the White House.

“Canada obviously can’t assign our emissions to an unwilling nation,” he writes. “The Paris Accord is clear on this. Without this unapproved transfer of our emissions to the United States, Canada’s climate gap nearly doubles.” So if Trump follows through on his fulminations about pulling the U.S. out of Paris, “the offsets would clearly not be valid.”

To get at Canada’s mid-century decarbonization target, the Pembina-Energy Innovation report includes a “PCF-Extended” scenario that carries forward the dozen policy measures it assessed for 2030 and strengthens them through mid-century, or until they’ve achieved as much as they can. That includes a $10-per-year increase in the federal floor price on carbon, bringing it from $50 per tonne in 2022 to $330 per tonne in 2050. Carbon pricing does the lion’s share of the work in the extended scenario, and Canada falls short of its 2050 commitment by about 200 megatonnes of greenhouse gas emissions per year. The projection also assumes fewer cars on the road by 2050, with 60% of them electric, compared to 38% in a business as usual scenario.

Both the existing Pan-Canadian plan and the 2050 extension save money over time, “providing a clear illustration of the compatibility of climate change goals and economic development,” the report states. “Both packages exhibit the pattern of costs in early years (as the policies cause people and businesses to invest in new technologies, efficiency upgrades, and so forth) and savings in later years (once the cumulative fuel savings outweigh the costs of the capital upgrades).” Savings hit $45 billion and 2,700 lives per year if the PCF simply continues at its current intensity through mid-century, $150 billion and 4,600 lives per year with greater ambition.

The auditors-general, meanwhile, concluded in their first-ever joint climate assessment that as of 2015, the last year for which figures were available, Canada’s emission reduction goals were “a hodgepodge of different targets, with no consistency in how emissions are measured or whether cuts will target overall greenhouse gas outputs or just those from specific economic sectors,” The Canadian Press reports. “The auditors say that means there is no clarity on how Canada and the provinces and territories are going to measure, monitor, and report on their contributions to meeting Canada’s international commitment to cut emissions by at least 30% from 2005 levels by 2030.”

The audit also determined that Ottawa and the provinces have not “really assessed the risks a changing climate poses to the country and have no real idea of what might be needed to adapt to it,” CP notes. The assessments they’ve conducted to date “have been haphazard, inconsistent, and lacking in detail, with no timeline for action and no funding.”

McKenna acknowledged the importance of the joint assessment but said the report looks backward, without factoring in the impact of the pan-Canadian plan, since the plan was released after the scope of the audit had been set.