Below 2C
Home Environment Climate Change = Extreme Weather. What You Need To Know

We at Below2°C are pleased to feature our condensed version of Extreme Weather and Climate Change: What You Need to Know, from the Climate Reality resource library. Many of you climate advocates will already be quite familiar with the content of this post but it does provide an excellent overview of how our climate is changing.

However, the post is meant more for the millions of concerned people from all walks of life who are distressed about the climate and wish to know more about it. It is mostly meant to drive people to take action.

Every new year seems to arrive on the heels of another unfortunate climate record. And 2017 is among the most startling. Climate-related and other natural disasters caused a staggering $306 billion in total damages in the US, making 2017 by far the most expensive year on record for disasters in the country.

And globally, in the wake of Hurricanes Maria, Irma, and Harvey, an immensely destructive wildfire season in the American West, and a dire drought in South Africa, one question has been hard to escape:

What does that mean for us? Events like torrential rains, floods, heatwaves, hurricanes, the “polar vortex,” and drought are becoming more frequent and intense.

You don’t have to be a scientist to know what’s on the horizon if politicians and business leaders keep denying reality and refusing to act. We’re seeing it already.

Sea-level rise caused by climate change can dramatically extend the storm surge driven by hurricanes. And as sea levels rise because of climate change, ever-stronger storms are expected to carry water further and further inland. 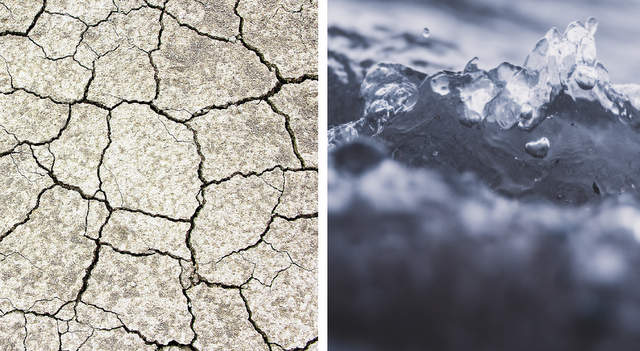 Climate change increases our risk of both heavy rains and extreme droughts. But why – and how – is that? Aren’t the two contradictory?

Science has shown that climate change touches every corner of our planet’s ecosystems, and the water cycle is no exception. Specifically, as global temperatures have increased at their fastest rates in millions of years, this rise has directly affected things like water vapor concentrations in the atmosphere, clouds, and precipitation and stream-flow patterns. Because the processes involved are highly dependent on temperature, changes in one have consequences on the other.

So how does climate change impact the water cycle? To explain, let’s take a closer look at the two most extreme impacts of a water cycle in crisis: severe flooding and drought.

When water evaporates from the land and sea, it eventually returns to Earth as rain and snow. Climate change intensifies this cycle because as air temperatures increase, more water evaporates into the air.

Because warmer air can hold more water vapor, this is contributing to an increase in the average annual amount of rain and snow in some places and creating more intense rainstorms in others. The result is major problems like extreme flooding in communities around the world.

Additionally, at the same time, sea levels are rising faster than at any time in almost 3,000 years, and it’s worsening coastal flooding globally. The United Nations Environmental Programme estimates that half of the world’s population lives within 60 kilometers (about 37 miles) of a coast – and three-quarters of all major cities are on a shoreline.

At the same time that some areas are experiencing more intense precipitation, others are experiencing more drying and even drought. As discussed above, as temperatures rise, evaporation increases. And when this evaporation happens over land, soils dry out. Then, when rain does come, much of the water runs off the hard ground into rivers and streams and is carried back to the sea – all while the soil remains dry.

In urban, suburban, and agricultural areas, this runoff can pick up pollutants from the landscape – including sewage from overwhelmed single-pipe systems – and carry them to nearby rivers and other waterways, including reservoirs.

On the other end of this same spectrum, periods of drought, enhanced evaporation, and decreases in overall annual rainfall result in reduced water levels in streams, rivers, and lakes. This leaves less water to dilute even relatively common pollutants – and eventually less water to irrigate crops or drink.

A major drought can have serious consequences for people’s livelihoods, affecting everything from agriculture and transportation to public health.

And of course, all of this has some major implications for food security and supplies of drinkable water. Then there are consequences of severe drought you might not immediately think about – like the role it plays in worsening forest fires.

Making the connection between global temperature rise and wildfires is also pretty simple science. Droughts dry out the land, killing plant life – which then also dries out itself, becoming far easier to ignite. And, with less predictable rains, it’s harder to stop these fires once they begin. Wildfires can leave communities and governments with millions of dollars in damages, not to mention the incalculable costs of lost plant, animal, and even human life.

As you might expect, extreme heat is one of the most direct and easiest to understand effects of man-made climate change. Unsurprisingly, 17 of the 18 hottest years on record have occurred this century.

“If you warm up the planet, you’re going to have more frequent and intense heat waves,” Dr. Michael Mann explained to Climate Reality.

Extreme heat elevates the rate of death from illnesses like heart attack, heat stroke, organ failure, and more. The journal Nature Climate Change reports that potentially deadly extreme heat is a growing concern, and will likely become more frequent and will occur over a larger portion of the planet in the coming decades.

Around 30 percent of the world’s population is currently at risk. By 2100 this is expected to rise to 48 percent even with drastic greenhouse gas reductions and to 74 percent under a business as usual scenario.

When we talk about climate, we are talking about long-term trends and expectations. Some skeptics, however, like to point to cold snaps as evidence against climate change. In many instances, they couldn’t be more wrong.

“The unusual weather we’re seeing this winter [2017-18] is in no way evidence against climate change,” Dr. Michael Mann explained to Climate Reality. “It is an example of precisely the sort of extreme winter weather we expect because of climate change.”

Why is this happening? The short answer, at least in part: it’s about the Jetstream. The Jetstream is both slowing and growing increasingly wavy, allowing bone-chilling cold Arctic air to both spill much farther south than usual and linger over areas unaccustomed to it for longer.

Act On the Climate Now

It’s not too late to make a difference for the future of our planet.  It’s our responsibility to do everything we can to prevent the worst effects of climate change. And it certainly could get much worse.

One of the most important things you can do to take action now is to share your concerns about the climate crisis widely with your networks, friends, and family. Here are some of the specific actions you can take:

Click Here for the unabridged version of Extreme Weather and Climate Change: What You Need to Know.

We had better understand what is happening
And make up our minds about it
Before it makes up our minds for us ~ Yuval Noah Harari.