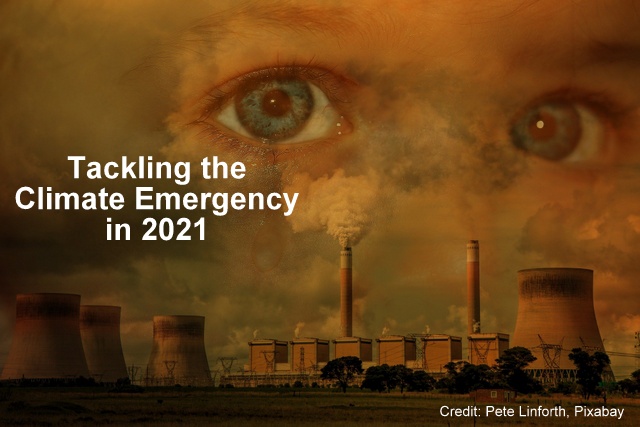 Millions of people around the world will remember 2020 as the year that two major crises intersected bringing us to the stark realization that our future will be changed forever. Both the COVID-19 pandemic and the unfolding climate crisis are the products of a changing climate and a warming planet, leaving many to ask whether 2020 provides a glimpse into what our children and grandchildren will inherit. As the year draws to a close, we must ask ourselves if there are useful lessons we can carry forward to tackle the climate emergency in 2021. (Below2C Editor)

The following piece by Chris Gusen (member of the 350.Org team) was first published in 350.Org. You can connect with Chris on Twitter.

2020 was tough. But, as we look back on the past year, it also brings us a tremendous amount of hope. Seeing how the world mobilized to fight COVID-19 gave us a glimpse of what might be possible if our elected officials treated the climate emergency just as seriously. As we rest up and prepare to continue our fight for a made-in-Canada Green New Deal in 2021, here are some of the biggest lessons we’re taking from 2020.

We’re organizing to win a Green New Deal for Canada because it’s the only plan that meets the climate emergency at the scale and speed that science and justice demand. Some critics have called this vision for a rapid, just transition off fossil fuels unrealistic, but the COVID-19 crisis has proved them wrong. As we saw this year, our governments are more than capable of moving quickly and boldly when faced with a crisis.

The climate emergency requires the same decisiveness. Climate-driven disasters like extreme wildfires and floods are already taking lives and devastating communities around the world. 2020 is on track to have been the hottest year on record. And, just like with the pandemic’s exponential curve, climate chaos will accelerate beyond our capacity to manage it if we don’t aggressively flatten the carbon emissions curve. 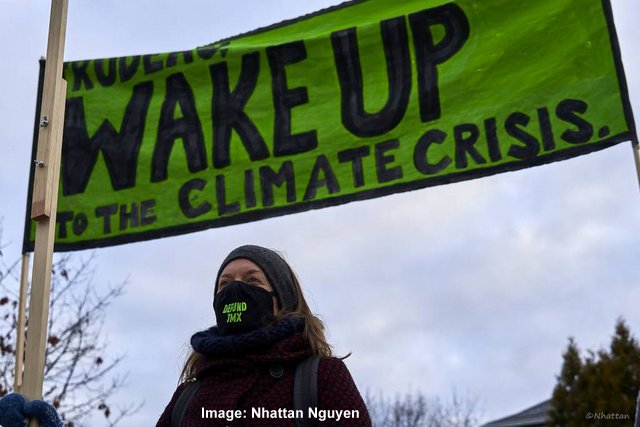 In the past, politicians have gotten away with delaying climate action because global warming didn’t feel like an immediate threat to their personal wellbeing in the same way a global pandemic does. That’s changing fast thanks to the tireless work of social movement organizers, who have spent years building people power and holding politicians’ feet to the fire. A majority of Canadians now support a Green New Deal and, as 2020 has shown everyone, the level of government action the plan calls for has always been possible.

Donald Trump called COVID a hoax, but that didn’t stop COVID coming all the way to the White House. Along the way, over 300,000 Americans died and millions were infected. The pandemic made it clear that science denial is deadly.

In Alberta, Jason Kenney’s government preached personal responsibility instead of putting real prevention measures in place, consistently ignored the advice of their Chief Medical Officer, and fired thousands of public healthcare workers in the middle of the pandemic. The result? Alberta is suffering through a crushing second wave.

Many Canadians are looking jealousy to Australia where, after the government enforced strict lockdown measures in response to a second wave, life has returned to pre-pandemic normal.

While announcing his updated climate plan earlier this month, Prime Minister Trudeau took a jab at Conservatives with the line, “Science is not a pick-and-choose buffet.” We agree but, when it comes to the climate emergency, listening to the science means acting much more boldly than Trudeau is right now. Pipelines are off the menu. A Green New Deal is the main course.

Trudeau: Science is not a pick and choose buffet

3. The media knows how to cover a crisis after all

During the last federal election, as part of the Our Time campaign, young people pressured the CBC to host a leaders’ debate on the climate emergency and a Green New Deal. We gathered tens of thousands of petition signatures, rallied outside CBC studios and met with officials from the public broadcaster. In the end, they shrugged off the demand and lived up to their reputation of dismissing the climate emergency. After all, it was only a year ago that CBC’s Director of Journalistic Standards, Paul Hambleton came up with this out-of-touch advice to reporters:

“The ‘climate crisis’ and ‘climate emergency’ are words that have a whiff of advocacy to them. They sort of imply, you know, something more serious, where climate change and global warming are more neutral terms.”

The rest of Canada’s new outlets haven’t been much better on climate, but the COVID-19 crisis reminded us what it feels like when the media takes an emergency seriously: daily press conferences with top officials, breaking news updates on the hour every hour, and constant pressure on elected officials to take the necessary action. 2020 showed that the media knows how to cover a crisis. It’s about time for them to bring that same energy to the climate emergency.

4. When can’t afford to lose, money is no object

Opponents of strong climate action love to ask us, “BUT HOW WILL YOU PAY FOR IT?” They conveniently ignore the fact that failing to confront the climate emergency will cost orders of magnitude more. The crisis is already costing Canada billions. Climate-fueled disasters like the Fort McMurray wildfire, which caused $9 billion in damages, will only get worse if we don’t confront the climate emergency now.

In the end, this kind of economic calculus is a distraction from what really matters. You can’t put a price on human life and dignity. You can’t calculate the GDP contribution of the biosphere (although some economists have tried).

When it comes to the climate emergency, it’s critical that politicians show the same willingness to spend big on solutions that they did for COVID-19. That’s why it was so disappointing to learn that the Liberal cabinet left a $100 billion green recovery plan on the table earlier this year because they were worried it might seem like they’re taking advantage of the pandemic to further a “green agenda.” We’re fighting for a Green New Deal because it’s bold enough to spend what it takes to address the intertwined crises that brought us to this dangerous moment.

5. Big corporations will profiteer off any crisis (unless we stop them)

It turns out dozens of corporations took the government’s Federal Wage Subsidy while their profits actually went up throughout the pandemic. The program was supposed to help businesses keep people on the payroll, but many companies fired workers and focused instead of paying dividends to shareholders. One of the worst offenders was Imperial Oil, which took $120 million from the federal government, then turned around and paid its shareholders $324 million in dividends while laying offing workers in Alberta.

The same thing is likely to happen if future governments direct public dollars towards the private sector as part of their climate emergency response, like when the Liberals gave Loblaws, a company that literally profited from fixing the price of bread, $12 million to install energy efficient fridges. That’s why it’s vital that, when we organize to win a Green New Deal, we insist on a version of the plan that puts people, communities and the planet first.

One of the pandemic profiteers exposed in this CBC investigation, a billion-dollar janitorial company called GDI, told workers like Annette Reyes it “could no longer afford to keep her on the payroll.” Meanwhile, the company’s share price hit a record high this year due to the increased demand for cleaning services. On top of that, GDI received $29.4 million from the Canada emergency wage subsidy program (CEWS). And it’s a good bet that Annette will get more scrutiny from the federal government for her CERB payments than GDI ever will.

These kinds of stories are infuriating and tragic. As a society, we celebrated the pandemic’s frontline heroes. Those were predominantly low-wage workers, caring for seniors, stocking grocery shelves, cleaning hospitals and delivering food. Next time the government wants to help these people, they should do it through direct income support instead of trusting corporations with our public money. 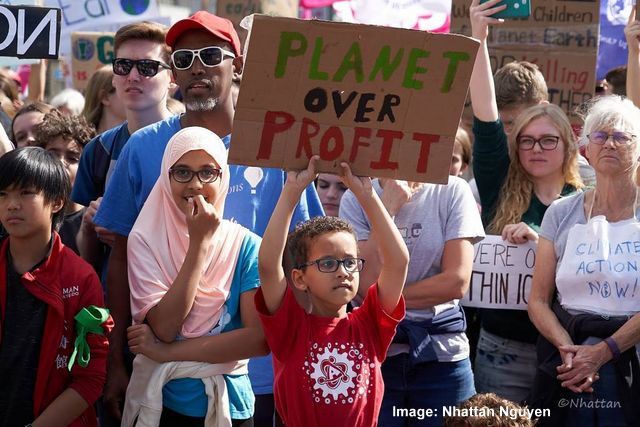 A key part of the Green New Deal will be providing income support and retraining opportunities to oil and gas workers displaced by a rapid transition off fossil fuels. This pandemic has shown that big oil companies can’t be trusted with that cash. Instead, we should hold them accountable to pay the billions in cleanup costs associated with dismantling and remediating old wells and infrastructure and prioritize support for workers.

7. Politicians can work together across the political spectrum

Canada’s response to COVID-19 happened under a minority government and that’s a good thing. The crisis situation naturally rallied politicians to work together across the aisle. Leading a minority government forced the Liberals to make concessions to the NDP, like extending CERB and enforcing paid sick leave, that improved the situation for working people. We know the parties can work together. Now it’s time for them to do the same for the climate emergency, uniting behind a full-scale mobilization to decarbonize everything while protecting people and the planet.

The neoliberal, free-market fundamentalism that has dominated political discourse for the last four decades has sold us a dangerous lie about humanity. It wants us to believe we’re all selfish, greedy and individualistic. Using these ideas as cover, successive governments have slashed the social safety net.

The pandemic, straining our underfunded healthcare system to its limit, has reminded us that we live in a society after all.  It’s also shown us that humans aren’t the naturally selfish creatures economists want us to think we are. We’re inherently social, cooperative, and willing to go above and beyond to protect the common good. There have been plenty of anti-mask protests and racist tirades, and it’s crucial that we confront those aspects of our society. But that toxic behaviour has been overwhelmed by the mutual aid groups, the demonstrations of solidarity with frontline workers and the everyday acts of kindness that we’ve shown for one another during this terrible, horrible, no good, very bad year.

We fight for climate justice and a Green New Deal because we want to live in a world guided by empathy, generosity and love. This awful year has reminded us that catastrophe can bring out the best in us. We will only get through the climate emergency, the greatest threat our world has ever faced, if we fully embrace that side of ourselves.

ICYMI:
Canada: Falling Far Short On Climate Policy, Emissions Reduction and Energy Transition
Because IPCC: A True Story from 100 Years in the Future