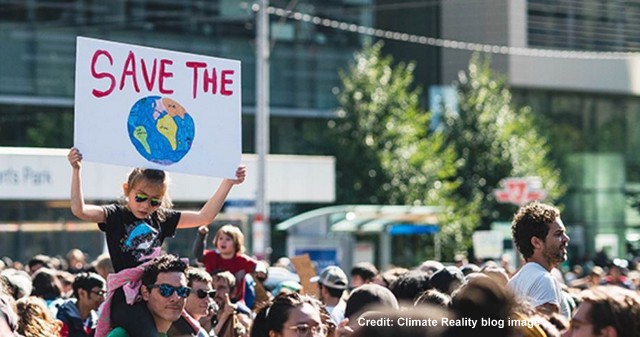 Do you sometimes get a creeping sense that hope has seen better days? Our future seems so unpredictable and so threatening. This is precisely the time when we need for hope to flourish.

“It is then in making hope practical, rather than despair convincing, that we must…extend our campaigns.” — Raymond Williams (author, academic, cultural theorist, critic, socialist)

The following piece is sourced from the Climate Reality blog.

With continued action, a just, sustainable future is within reach!

As with COVID-19 and systemic racism, 2020 has been a wakeup call on the climate crisis. Record-breaking hurricanes, wildfires, floods, and temperatures made the challenge we face crystal clear.

In the midst of these impacts, it can be easy to lose hope for our planet. And this, in turn, can lead to something much worse: inaction.

Trying to solve the climate crisis without the US — the second-largest emitter of greenhouse gases in the world — is, at best, discouraging. But for the past four years, that’s effectively the reality the world has faced.

Throughout its term, the Trump Administration has constantly undermined and denied climate science, and has executed over a hundred environmental rollbacks — many critical to reducing carbon emissions nationwide.

But today, with an incoming administration that promises to listen and act on the science, we’re hopeful.

Hopeful because President-elect Biden has promised the US will re-enter the Paris Agreement and uphold the commitment to a sustainable future that we made five years ago.

Hopeful that common-sense environmental protections will be reinstated.

And hopeful that, with continued pressure from advocates across the country, the Biden-Harris Administration will invest in green jobs, efficient buildings, and climate smart infrastructure — initiatives that would put millions to work, create healthy communities, and help us avoid the worst of the climate crisis.

In the midst of the coronavirus pandemic, the incredible momentum of the climate movement could have sputtered out. But instead, the opposite happened.

Marches with hundreds of thousands of attendees evolved into online events with millions of viewers worldwide, effectively keeping the movement, well, moving.

This three-day livestream from April 22–24, which Climate Reality and Climate Reality’s founder and chairman, former US Vice President Al Gore proudly participated in, is now recognized as the largest online mass mobilization in history.

It’s not just views that count, though. This year has also seen continued action.

In July, for example, Climate Reality supporters sent nearly 40,000 comments to Congress demanding that the EPA stop giving fossil fuels a free pass to pollute during the pandemic. Today, we’re proud to say EPA backed down.

This year, the climate movement remained a force to be reckoned with — even with the need for social distancing.

3. Finance is Waking Up to Climate

Increasingly, investors are recognizing the risks that fossil fuels pose to people, economies, and our entire planet. And in 2020, their actions clearly reflected it:

Over the past year, six of the largest banks in the US — Citigroup, Goldman Sachs, JPMorgan, Morgan Stanley, Wells Fargo, and Bank of America —pledged to end funding for new oil drilling and exploration projects in the Arctic.

Just this December, the Federal Reserve — the central bank of the United States — officially joined the Network of Central Banks and Supervisors for Greening the Financial System: a group of central banks and regulators figuring out how to account for environmental and climate risk in the financial sector.

Also this December, the $226 billion New York State pension fund announced it will be divesting from fossil fuel companies unwilling and unprepared to align with the Paris Agreement!

The pattern is clear: investors of all sizes are finally starting to put their money to work for good.

4. The Work of Climate Reality Leaders

One of our biggest sources of hope this year? The dedicated advocacy of Climate Reality Leader activists worldwide.

Really though, their results speak for themselves:

This year the Los Angeles Community College District – the largest community college network in the country – committed to eliminate carbon-based electricity consumption by 2030 and replace all other carbon-based energy use with clean, renewable energy sources by 2040. This was thanks, in large part, to the dedication of a team of Climate Reality Leaders in the Los Angeles area.

The aforementioned New York State pension fund divesting billions of dollars from fossil fuels? We’re proud to share that Climate Reality Leaders worked with the DivestNY campaign to make that accomplishment a reality.

Beyond that, we’re given hope by the fact that this year, by taking our signature in-person activist trainings and making them virtual, we could help equip and empower a record-breaking 9,710 new Climate Reality Leaders from 174 countries to take the climate fight forward! These passionate individuals are already advocating for the future of our planet all around the world.

Tragedy after tragedy this year brought unprecedented attention to systemic racism in the US.

Simultaneously, the disproportionate impact of COVID-19 on low-income and minority communities laid bare the country’s legacy of environmental injustice like never before.

Together, these crises have shown what racial and environmental injustice look like and the country no longer has the option of continuing to turn a blind eye.

Today, we find hope in believing that 2020 won’t just be a wakeup call on racial and environmental injustice, but also be a turning point — one toward a truly just and sustainable future.

6. Cities Are Rising to the Climate Challenge

Cities consume over two-thirds of the world’s energy and account for more than 70 percent of global carbon dioxide emissions. As such, their support for bold climate solutions is pivotal.

Fortunately, we’re seeing that support translate into real action around the world.

In the US, take Chicago, Philadelphia, and Los Angeles, for example. These and 167 other US cities have made public commitments to transition to 100 percent renewable energy. That’s 170 of the largest sources of the country’s carbon emissions working proactively toward a sustainable future.

And as the cities working together as the C40 coalition demonstrates, the same is true worldwide.

In 2020, this group of global megacities  — think London, Beijing, and Lagos, to name a few — released the C40 Mayors’ Agenda for a Green and Just Recovery: a response to the COVID  pandemic that focused on investment in green jobs in cities and calling on national governments and institutions to prioritize clean energy investment and public transit as part of recovery plans.

A global transition to a decarbonized, clean energy economy is essential to solving the climate crisis. And beyond that, fossil fuel pollution takes a significant toll on human health — too often, disproportionately that of frontline and minority communities.

That’s why the following developments in the price of renewables give us hope for a healthier, more sustainable future:

Over the past decade, the cost of solar panels has fallen by 89 percent. So much that this year the International Energy Agency called solar power “the cheapest source of electricity in history.”

Similarly, the cost of onshore wind turbines fell 59 percent over the past decade.

The impact of these decreasing prices is already clear:

This year, the International Energy Agency (IEA) projects that almost 90 percent of all new electricity capacity worldwide will be from clean, emissions-free energy.

The future of renewables like wind and solar is looking brighter than ever.

8. Our Future Is Electric

According to data from Climate Watch and the World Resources Institute, in 2016, transportation accounted for 16.2 percent of global greenhouse gas emissions.

What’s more, transportation emits the most greenhouse gases of any sector in the US, accounting for almost 28.5 percent of emissions.

Fortunately, electric vehicles (EVs) can reduce that carbon footprint, all while tackling harmful air pollution. And fortunately, things are looking up for this thriving mode of transportation:

The cost of batteries for EVs has dropped by 89% over the past decade, allowing them to closely rival the cost of comparable internal combustion vehicles.

Passenger EV sales jumped from 450,000 in 2015 to 2.1 million in 2019. This trend is only expected to continue as the biggest auto manufacturers in the world (think Ford, Nissan, and Volkswagen, to name a few) continue investing billions to develop their own EV models.

In fact, projections show that over half of all passenger vehicles sold will be electric by 2040.

ICYMI:
Lessons From 2020 On How To Tackle the Climate Emergency In 2021
We Must Treat The War on Climate Like WWII
We Pick Climate Hope Over Climate Despair