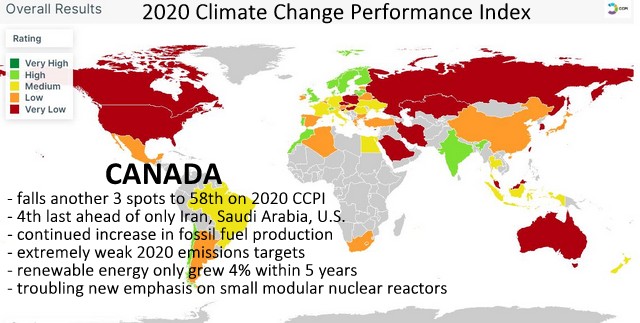 “Ranked among the worst-performing countries in CCPI 2020, Canada fell another three spots in this year’s index, to 58th,” reports the 2020 Climate Change Performance Index. “Despite positive rhetoric from Canadian leaders, experts cite substantial discrepancies between the goals the government has set and the implementation of the policies necessary to achieve them.”

In this article, (first published in The Energy Mix) Mitchell Beer exposes the flaws in Canada’s climate action strategy.

The New Plan – At First Glance

Prime Minister Justin Trudeau [recently] unveiled an updated national climate plan that includes a $170-per-tonne carbon price in 2030, C$15 billion in new climate spending, a more modest Clean Fuel Standard, and a slight increase in the country’s 2030 carbon reduction goal—just barely enough to keep the government’s promise to boost its ambition beyond the 30% target originally adopted by the Stephen Harper government in 2015.

The plan commits to an eight-megatonne reduction in the 2030 target, from 511 to 503 Mt, enough to bring the percentage up from 30% to fractionally more than 31%. Ottawa projects a carbon reduction of 32 to 40% by 2030 if provincial governments get onboard with their own climate action plans.

Trudeau announced the new target just hours after the European Union adopted a 55% target for 2030 that translates to about 50% after factoring in all the fine print.

“This is a day on which I think Canadians should be proud,” the PM told CBC News. “Because this is the first time Canada’s ever had a plan that is being proposed that shows how we will not only meet, but we will exceed the targets to which we have committed internationally.”

Alberta Environment Minister Jason Nixon immediately condemned the plan as “another attack on Alberta’s economy and Alberta’s jurisdiction”. But the Conservative-focused Clean Prosperity think tank welcomed the carbon price increase as a “bold, brave, and wise move that will set Canada on the path to decarbonization,” sending a message to investors that the country is serious about climate action.

“This was not an easy choice, but it’s the right choice. The government is wisely adopting a low-cost policy option that is good for the economy,” said Executive Director Michael Bernstein. “Contrary to what critics argue, carbon pricing is the most cost-effective and affordable option for reducing Canada’s emissions. It is the one climate policy that puts money back in Canadians’ pockets.”

“When it comes to climate action, honesty is the best policy,” agreed Clean Energy Canada Executive Director Merran Smith. And “there’s no two ways about it: the updated climate plan unveiled today is historically and globally significant. Most importantly, it’s a comprehensive and honest plan to get Canada to beat its 2030 climate target.”

Dale Beugin, research and analysis vice-president at the Canadian Institute for Climate Choices, greeted the announcement as a credible plan for the country to meet its climate targets. “Like many jurisdictions, Canada has often been accused of being long on climate rhetoric and short on policy to deliver,” he wrote. “This plan changes that. Environment and Climate Change Canada’s modelling shows that the multiple policy pieces in the Plan add up to emissions reductions in 2030 that actually exceed our current target.”

The Globe and Mail notes that the new strategy relies on a pending Supreme Court of Canada decision on the constitutionality of the federal price on carbon. As well, “after a contentious five years locked in battles with provinces over measures to cut emissions, the plan marks a significant departure from how the Liberals craft their climate policy. Instead of relying on cooperation with the provinces, Mr. Trudeau revealed a suite of measures that his government controls.”

“This plan for a healthy environment and a healthy economy was developed for the federal government,” Trudeau told media Friday. “We know that Canadians understand that it can no longer be free to pollute anywhere in the country.”

A release from Trudeau’s office said the plan would position Canada as a leader in a low-carbon economy valued at US$2.5 to $6.4 trillion by 2022-23. “Canadians don’t have to choose between clean air and good jobs,” the PM said. “This strengthened climate plan will help us build a healthier, fairer, and more resilient future that we can be proud to pass on to our children and grandchildren.”

During a webcast Thursday organized by Climate Action Network-Canada, Environment and Climate Minister Jonathan Wilkinson said the plan would be about industrial development just as much as carbon reductions. “I’ve always been of the view that this has to be an economic strategy as much as an environmental strategy, and the transition toward greenhouse gas reductions has to take account of the opportunities, not just the threats,” he said.

Canada will be “focused very much on industrial policy that is really about building a low-carbon economy at the same time that we are very focused on reducing GHG emissions,” he added, at a time when China, the EU, and the incoming Biden-Harris administration in the United States will be doing much the same.

There are nearly four dozen specific items in the federal announcement. Get the details here.

“Friday’s plan also narrows the scope of the federal Clean Fuel Standard (CFS) to liquid fossil fuels like gasoline, diesel, and oil,” the Globe writes. “It will no longer cover gas or solid fuels, as originally planned. Details of the CFS will be released next week, but business groups praised the move.” Fossil lobbyists at the Canadian Association of Petroleum Producers “also supported removing gas and solid fuels from the CFS,” the Globe adds, but said they were “analyzing the announcement to fully understand the implications for the oil and gas industry.”

Much of the early news coverage focused on the government’s plan for a $15-per-year increase in the federal floor price on carbon, beginning from the base of $50 in 2022 established in the Pan-Canadian climate plan. Ottawa will now issue carbon price rebates to Canadian households quarterly, rather than annually, and the plan maps out a possible role for border carbon adjustments in helping industry keep up with competitors in jurisdictions with lower carbon prices. CBC has details on how the carbon price and the rebates will work.

Trudeau “noted that Canadians will have their say on the carbon tax with a general election before the proposed increases kick in,” the Globe writes. “He also took aim at the premiers challenging the pollution price in court, saying they ‘still don’t understand that the only way to build a strong economy for the future is to protect the environment at the same time’.”

Climate and renewable energy advocates’ responses to the plan were divided between support for the carbon pricing announcement and criticisms that Ottawa’s carbon reduction target still falls far short given the severity of the climate emergency.

“Canada’s new $15-billion climate plan ratchets up ambition and investment when we need it most,” said Isabelle Turcotte, federal policy director at the Pembina Institute. “In addition to new regulations and financial supports, Canada’s new plan smartly relies on a significant increase in the price on carbon pollution. This is our most effective and powerful tool to tackle emissions that are contributing to climate change that is already costing Canadians billions of dollars.”

“By making a long-term commitment to regular and transparent increases in Canada’s carbon price, Canada is sending a clear signal to investors in the electricity sector, and across the economy, that the time to invest in low- and no-carbon solutions is now—and that the rate of investment needs to be accelerated,” said Robert Hornung, President and CEO of the Canadian Renewable Energy Association. “We support the federal government’s commitment to ensuring that Canada’s electricity system produces net-zero greenhouse gas emissions by 2050, and we believe a clean electricity performance standard can be an important tool in enabling this transition.”

The Canadian Environmental Law Association (CELA) welcomed the clarity on whether and how much the carbon price will increase after 2022. “CELA continues to support ambitious and effective action by all levels of government in Canada—municipal, provincial, territorial, Indigenous, and federal—to take meaningful action on the current climate emergency in order to avoid further devastating impacts of climate change, which will disproportionately impact low-income and vulnerable communities,” the organization said in a release. “A range of legal and policy tools are required, and the evidence brought to the provincial appeal courts and the Supreme Court of Canada clearly demonstrated that pricing mechanisms are essential in this global fight.”

Climate Action Network-Canada (CAN-Rac) welcomed the carbon price increase and the promise to cut emissions by up to 40% by 2030, but noted those numbers “pale in comparison to commitments being made by our closest trading partners,” including the EU and the incoming Biden-Harris administration.

“Canada is finally joining countries representing 50% of global GDP that know strong economic policy hinges on strong environmental policy. With this plan, people and communities across Canada can see themselves joining the huge clean economy that is taking over global markets,” CAN-Rac said. “Unfortunately, at a moment when other economies are putting a stop on the expansion of fossil fuel investments, this plan does not change the fact that Canadian governments continue to double down on fossil fuels, subjecting workers and our economy to the ever-increasing volatility of oil and gas markets.”

..the $15 billion in new investment, “a small fraction of what other countries are doing on a per capita basis, clearly cannot get the job done. In fact, Canada should be investing $270 billion if it was following the level of ambition of the U.S. or EU.” — Dale Marshall

Dale Marshall, national climate program manager at Environmental Defence Canada, acknowledged the “more comprehensive suite of climate policies” and the “meaningful escalation” in the retail carbon price. But he warned that the $15 billion in new investment, “a small fraction of what other countries are doing on a per capita basis, clearly cannot get the job done. In fact, Canada should be investing $270 billion if it was following the level of ambition of the U.S. or EU.”

Marshall added that Ottawa “continues to ignore measures that would most effectively reduce Canada’s greatest sources of carbon emissions: the oil and gas sector, and road transportation. The steps to reduce these emissions are well known: no new oil and gas projects, a gradual phase out of fossil fuel production and use, action to increase the production of electric vehicles.”

In a post for Policy Options, Vanessa Corkal, Ottawa-based energy policy analyst with the International Institute for Sustainable Development, pointed to the US$14.3 billion per year in taxpayer support the government still lavishes on the fossil industry, mostly in the form of public finance. “While it’s been reassuring to hear tangible commitments from our leaders in terms of new investments in a low-carbon economy,” she wrote, “there’s a high risk that the benefits of such funding will be offset as our government promotes sustainable development with one hand while subsidizing high-polluting fuels with the other.”

ICYMI:
What We’re Up Against: The New Climate Denialism
Climate Action: Speeding In The Wrong Direction