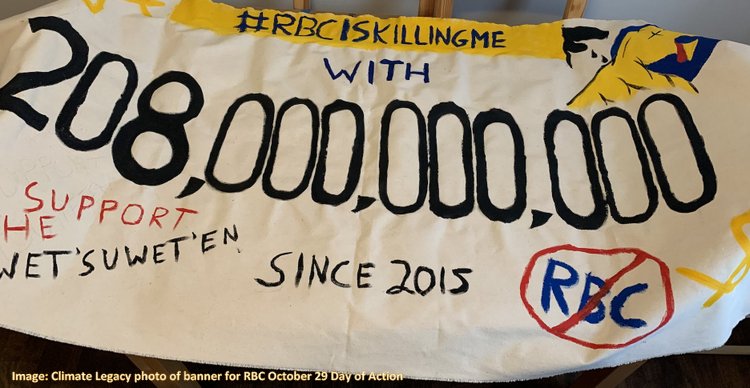 On October 29th, 2021, Land defenders and grassroots activists took action at more than 30 RBC bank branches across Canada to stop RBC from financing the climate crisis and assaulting Indigenous rights. Globally, young people, land defenders, and allied activists called on banks like RBC to #DefundClimateChaos in a global day of action.

(This post consists of a letter delivered to the manager of an RBC branch in Ottawa at the #RBCisKillingMe Day of Action of October 29, 2021, by the organizers of the event.)

The purpose of this letter is to convey the concerns of a group of climate-conscious people in Ottawa who are part of a larger Canada-wide network focusing on the funding of climate chaos by Canadian banks, most notably RBC. Our message is intended to:

1. We are in a global climate crisis

It’s not just activists sounding the alarm on climate. The IPCC (International Panel on Climate Change) says the world is on the edge of a code-red climate crisis. The International Energy Agency recently released a bombshell statement noting that the global community needs to put a halt to digging out new fossil fuels immediately – this year. And the UNEP 2021 Production Gap Report warns that we’re on track to produce more than twice the amount of fossil fuels in 2030 than would be consistent with limiting warming to 1.5°C.

Since the signing of the Paris Agreement in 2016, the world’s 60 biggest banks have pumped US$3.8 trillion into fossil fuels, according to the Banking on Climate Chaos 2021 report. The world is witnessing runaway fossil funding by the finance sector – banks, insurance companies and pension funds.

3. Shining a spotlight on RBC

RBC claims to care about the climate but continues to pump billions into fossil fuels. It is the 5th largest funder of fossil fuels in the world. Since the signing of the Paris Agreement in 2016, RBC has pumped $208 billion into fossil fuels globally, $29 billion in the Tar Sands and $14 billion on coal in just the last two years. RBC is the major lender to the Coastal Gas Link pipeline which is resisted by Wet’suwet’en Land Defenders. The Wet’suwet’en’ concerns are outlined in the attachment.

RBC says the right things but its climate and human rights practices are dead wrong. In an ad in Saturday’s Globe and Mail (October 23) RBC refers to “Reimagining a sustainable future” and commits to “actively partner, inform and inspire Canada’s sustainable future.” The ad ends with “This is Canada’s most ambitious path, and we will be there every step of the way.”

However, the ad makes no mention of any plan to stop funding new fossil fuel projects or any plan to gradually reduce the financing of already funded projects. It makes no reference to fossil fuels but instead it uses euphemisms like “financed emissions” and “traditional energy sources”.

In the ad, RBC vows “to create meaningful pathways for reconciliation with Indigenous peoples.” However, the daily reality of Land Defenders on the frontlines of pipeline projects, where confrontations with the RCMP are common, is quite the opposite.

Quite simply, the Globe and Mail ad is the most grandiose piece of “greenwashing” yet by RBC.

RBC’s abuse of Indigenous rights is widespread. Indigenous groups have long been at the forefront of the climate crisis and that’s also where RBC and other banks can be found funding the projects that are being resisted by Indigenous communities whose livelihoods are being affected.

#RBCIsKillingMe is a slogan of the Wet’suwet’en Land Defenders at the Gidim’ten Checkpoint. There, the Gaslink Pipeline is steamrolling through unceded territory and destroying the basis of the Land Defenders’ way of life. With UNDRIP having been passed into law, RBC’s failure to secure free, prior, and informed consent is now illegal.

Climate change and the abuse of their lands and rights both threaten the future sustainability of Indigenous peoples.

The Wet’suwet’en concerns are outlined in the attachment.

5. What we want to see from RBC